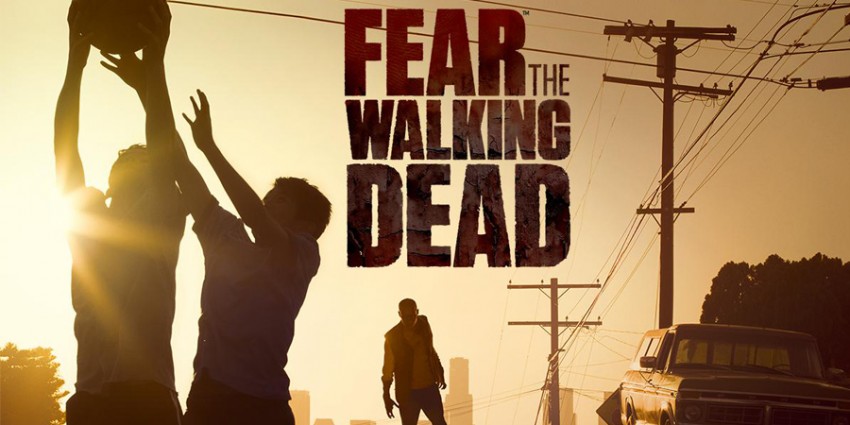 Well hello people! Did you enjoy the finale of Fear The Walking Dead? Non-stop,, action packed, full of walkers, and some very touching moments! For all you nay sayers, who dissed the series, I have a thought for you, “Knock it off!” If you were complaining about no walkers, guess what? You got a HORDE! If you complained about any series regulars being killed off, you got one! Liza! If you complained about Travis being a weenie, he transformed and went all RICK! Yes Travis is a dude now!

From start to finish, I think this was an excellent finale for season 1. Our group packed up to head out in search of Griselda, Liza and Nick, after hearing of the Cobalt plans. Daniel was ready to knock off Adams after getting all the info needed to find our lost ones, but Travis, having that never ending hope and faith in humanity, put the skids to that idea. They agreed to take Adams with, so he could show them the way. Well, Adams talked his way free from Travis after divulging the exact way to get the the missing loved ones.

Daniel and Ofelia had a moment. She is pissed with her father after what he did to Adams, but he told her he was” protecting her”. She retorted that she always thought he was the victim in his stories and found that her mother knew the truth as well.

All cocky and badass, Daniel strolled up to the compound, telling the guards it was a nice night and when they decided to get grouchy and attempt to shoot him, he cheerily told them, “you should save your ammunition” . Why? Well only because there were about 2000 plus walkers right behind him! This was an epic scene, and gave us all our walker fix! The horde started to overrun the complex as Liza was inside with Dr. Exner waiting to be transported out and to her son Chris. Transport saw that the place was being over taken by the infected and pulled out, leaving Liza, the Dr. and all the rest stranded. Exner tells Liza and all the other medical team to leave, saying that she will take care of the patients. Liza takes off. 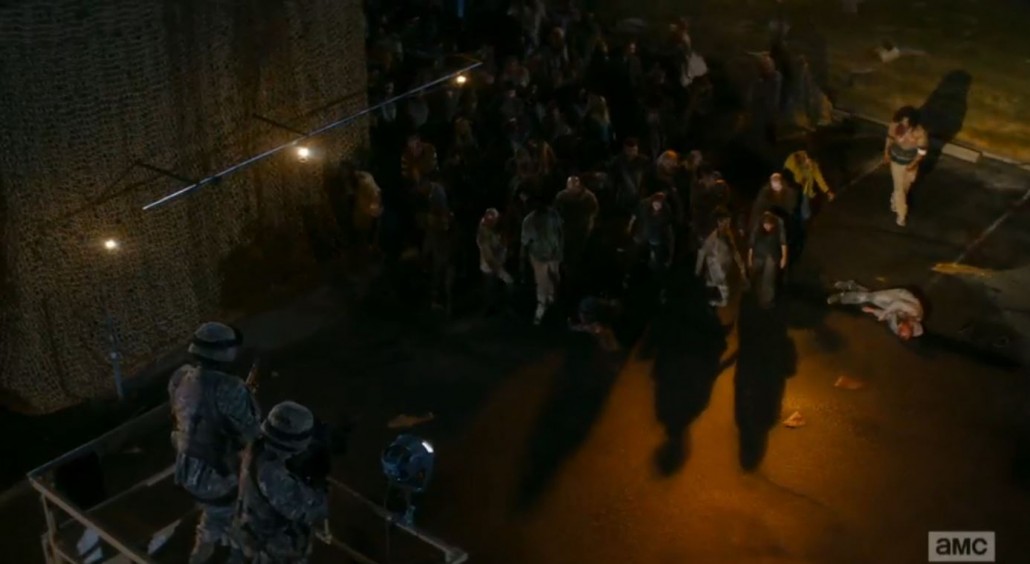 Travis and Madison, along with the others, made their way through the complex in search of Nick and the others. They come across the cage area and find out Nick has gone from there. They do at least let some of the people out as they carry on to find Nick. They have left Alicia and Chris waiting in the parking garage with the SUV and told them to leave for the campground if they didn’t return in 30 minutes. Bad move. Rouge soldiers, found the pair, wanted the vehicle and manhandled Alica. Chris “grew a pair” and tried fighting the brutes, but got the snot knocked out of himself.

Strand and Nick, being locked in the people cages, decided it was time to use that key and get the heck out. Hearing all the screaming and gunfire all around, they left the cage, and without even stopping to help the other caged people, went on their merry way. Strand and Nick, run into a walker chowing down on poor unfortunate  This is the guard that Strand got the key from, after trading his watch and diamond cuff links. He told the man to keep the watch, but took back his cuff links and left him for dead. With walkers around every corner, they run through the complex, looking for a way outside, eventually getting trapped in a hallway of walkers after accidentally locking the door. They are trapped with walkers closing in! Travis and the group come down the hall and see that Nick is trapped, they work furiously trying to break the lock to get to him, but it looks like they may not make it. Madison and Nick exchange looks through the window and he mouths the words,  “I love you”, as Liza scrambles to the door with a card key and gets them out just in time. 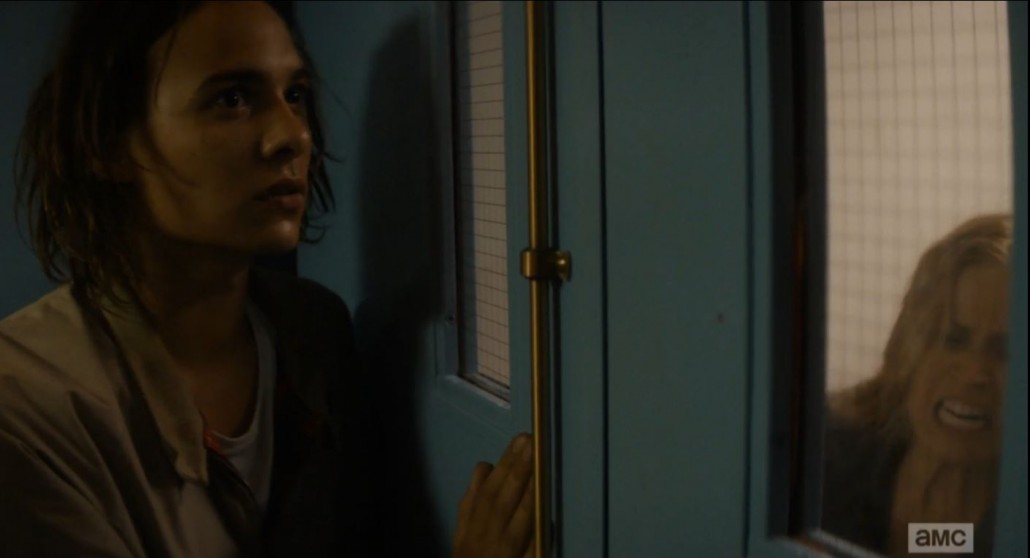 The group is attacked by walkers as they make their way through the kitchen area. Liza is almost killed by one , as Ofelia saves her. Madison is almost walker chow, until Nick steps up and kills it. The struggles aren’t over by a long shot, as they have to fight their way through the maze of complex rooms. They make it to the area with Dr. Exner, and she has already killed all the remaining patients with the bolt gun. Liza tries to make her see that she is needed and can help more people, but Exner is lost and they leave her there. She is seen picking up the bolt gun as the scene fades out. 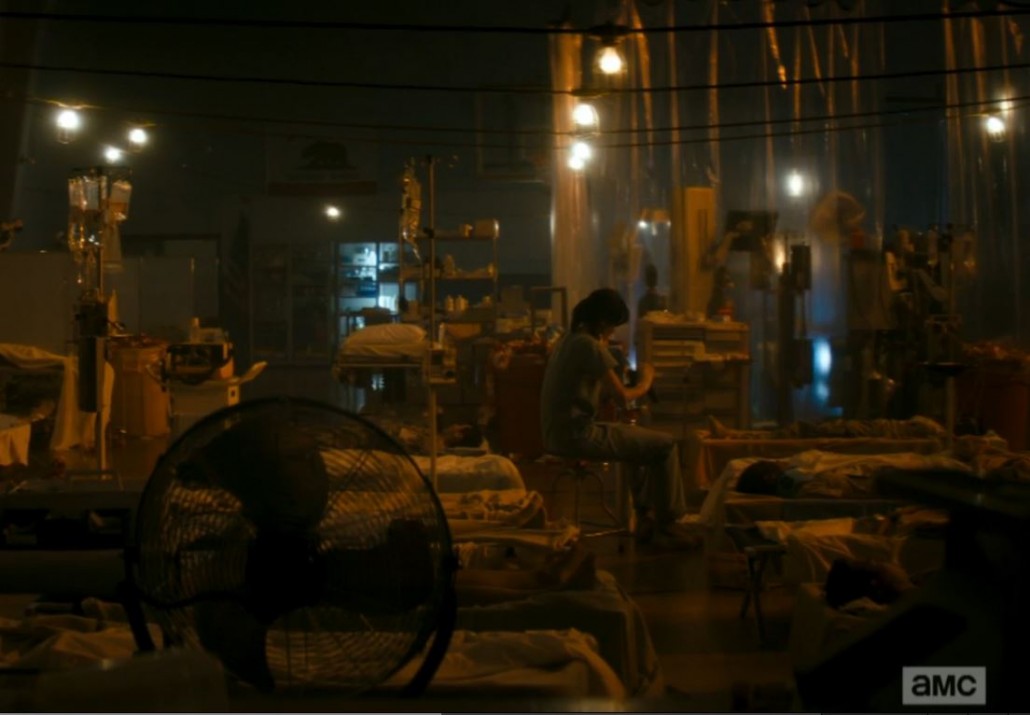 They all make it out of the compound alive, but not unhurt. Liza tells Daniel and Ofelia, that the infection took Griselda and they did everything they could do. She tells Ofelia that there is nothing left of her mother. With our group together, Madison and Strand talk about where to go. He tells her he has a place on the water, with supplies, so they decide to head west. On the way out of the building, they see the many piles of burnt bodies. Ash and bone are all that is left, as Daniel and Ofelia look on. They find Alicia and Chris, somewhat worse for wear as Adams appears with a gun. He calls out Salazar’s name with the full intention of shooting him. As Ofelia pleads with Andrew to stop, he pulls the trigger, shooting Ofelia! Travis channels Rick Grimes, and takes Adams down , pummeling him to a pulp! 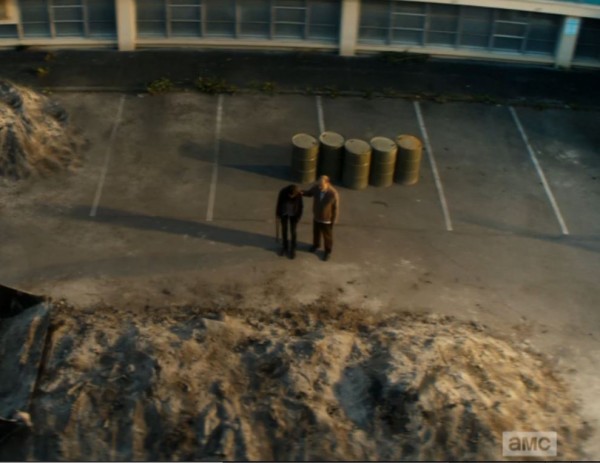 When they get to Strand’s house, they breathe a little sigh of relief. Ofelia will be alright, the wound is clotting and there are antibiotics that Madison took from the complex. Strand packs a suitcase as Nick watches. Strand keeps mentioning Abigail. When Nick questions him about it, he takes Nick to a telescope on the patio. There in the site, far out in the water, is a very large yacht. Liza talks to Chris and tells him how much she loves him, they embrace. Liza takes off to the beach and Madison follows. Liza then tells Madison that she was bitten and pulls out a gun. She asks Madison to be the one to do it, because there is no hope for her. As they argue over the situation, Travis arrives. Liza tells him and although he knows there is no hope he doesn’t allow Madison to do it. He takes the gun. In the distance, Alicia and Chris are on the patio and hear a gunshot. They run to investigate and Chris finds his mother dead. Travis is breaking right before our eyes as Madison comforts him

As the scene pulls away, in the far distance, beyond the yacht, the ocean is full of debris floating on the water. It looks like a crash. Could it be the plane? 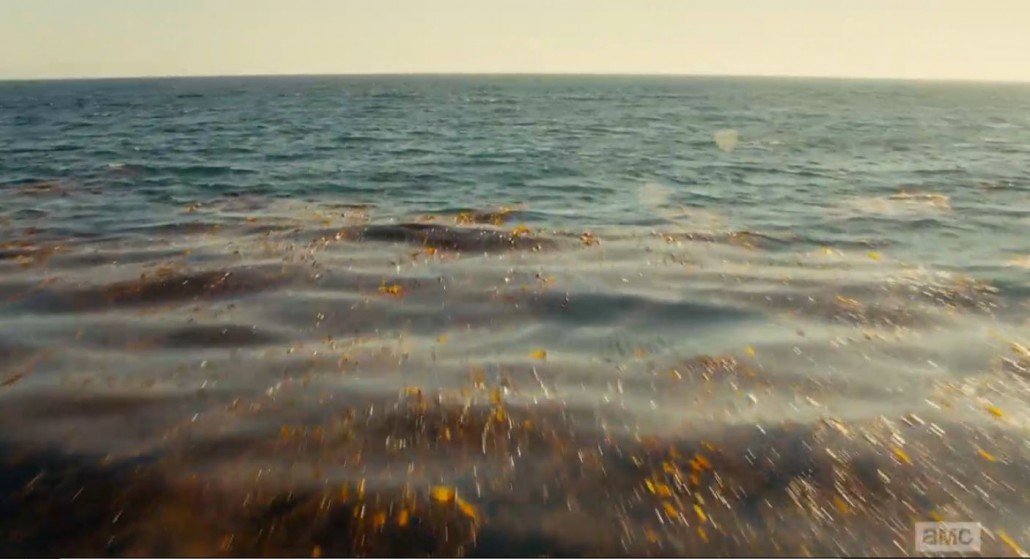 All in all, this was a fantastic episode. I was live tweeting and it took everything I had, to keep up. Twitter was crazy! I believe the writer’s gave us time to get accustomed to the family and their lives that were falling apart. Amid the monstrosity of this infection, were daily things, things that they tried to keep normal. It took awhile and very different instances for each character to realize what was happening. For Madison is was Tobias. Telling her all the things he knew would happen. Having to kill the principal and then seeing that normal people, without infection, were being shot. This sealed the deal for her. For Travis, it was the donut girl, Kimberly. Being told to shoot her by the guard, by them trying to force him to kill, showed him that the cavalry wasn’t intent on saving them after all. And then there was Cobalt. All these little instances of lost hope and lost humanity have played on our characters this season. I can truly say that I think this series will do very well. I am assured now that it can, and will hold up to it’s big brother, The Walking Dead. I liked the little things that screamed out to me from the Walking Dead, the hordes, the death of a main character and traveling down the empty highway (it was a really good shot). Tell me what you think of the series!

Just a tidbit for you. The first installment of the webisode, Flight 462 was released. So be watching ever week for more installments of this mini series. One of the characters in this webisode, will become a regular on next season of Fear The Walking Dead.

A group of passengers experience the outbreak aboard a commercial plane. A new installment of the 16-part series is available every week in the AMC Mobile App and on-air during premiere episodes of The Walking Dead.

A Look at Season 2 of Fear The Walking Dead