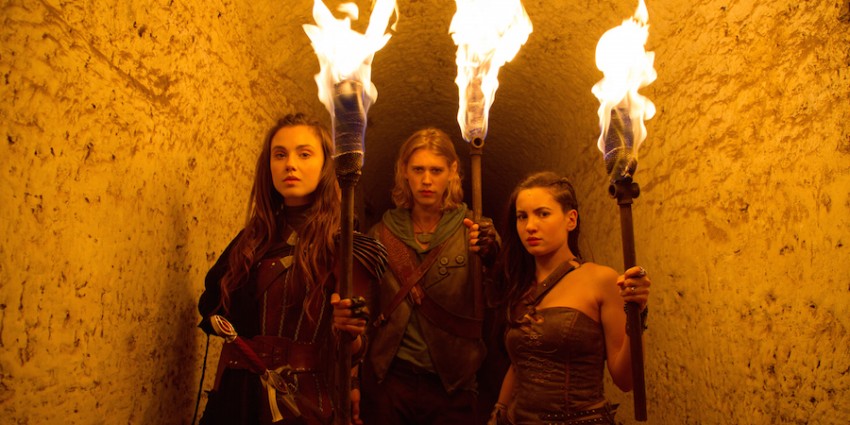 NYCC has come and gone and with it, we have a new Shannara trailer! Unlike the sneak peak preview released before, this full length trailer gives us a more in-depth look at what’s to come in the series. The 10 episode series debuts in January 2016 and is based around the best selling book, The Elfstones of Shannara, written by Terry Brooks.

There’s a lot in this new trailer and we finally get a good glimpse at what the series will show us. Brooks’ series is epic fantasy at some of its greatest and from what you can see from the shots of the setting alone, they’ve gotten a good grasp on the feel of the world.

We also get to meet more of the cast; Allanon (Manu Bennett), who is the last of the Druids and guardian for centuries in the Four Lands.

Will Ohmsford, our plucky half-Elf, half-Human hero (Austin Butler), heir to a very significant bloodline and bearer of the Elfstones.

Eretria, a human raised by a band of Rovers (Ivana Baquero) who has been forced to rely on her ruthlessness, looks, and sharp wit to survive.

Amberle, Elven Princess and the last of the Chosen (Poppy Drayton) who are the sacred guardians of the Ellcrys, a magical tree that is at the very center of the conflict in the series. For as long as the Ellcrys remains, the demon army in the Forbidding cannot invade the Four Lands.

Problem is, the Ellcrys is dying. These three, along with Allanon will be tasked to find a way to save it and the world. They don’t have a lot of time to do it either because as stated in the trailer, “Each leaf represents a single demon, once they begin to fall, the creatures of darkness will be released one by one.”

Elfstones is the best book out of the trilogy to get a TV show treatment and it’ll be interesting to see where they go with this, what they keep from the book and what they don’t. So far, there’s been one change from the book that was spotted in the trailer, Amberle goes after the role of being a Chosen instead of reluctantly being selected for it. What do you think? Tell us in the comments here and follow us for more Shannara news.