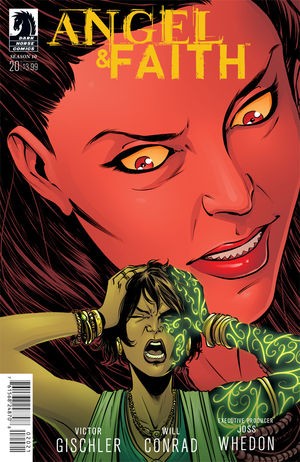 Drusilla and her cronies have nabbed Nadira, slayer-turned-magical-oracle-go-to-person of Magic Town. Can Angel, Faith and Fred get to her in time? This review contains spoilers.

There is quite a lot of things going on in this issue, that is for sure. I think with the last few issues A&F has been dancing around a bit, not quite getting anywhere, specially whilst Angel was over in the US visiting with Buffy. But now we are starting to have a clear story line here. Drusilla works for Archeus, who is wanting to reunite his family (Dru, Angel and Spike) in Magic Town. For this he needs the magic to let him rule the town. He hopes to get the magic on his side by befriending Nadira, making her an Magic Town ambassador of sorts. Angel and co reflect over the fact that it seemed like Nadira was quite happy to be taken by Drusilla. They aren’t wrong, it seems Nadira has a plan of her own. She does not want to be a magic ambassador for Archeus, but she offers to save him!? He isn’t very amused by this and asks her what she is on about. She explains that the magic in Magic Town is new and much like an angry scared toddler, that will be throwing it’s toys out of the pram, if creatures like Archeus come stomping in and tries to rule it. She says, she doesn’t care about him, but she cares about the town. He just laughs at her, which ticks her off. She explains she wanted to go about this differently, but deep down she is after all still a slayer. And with those words, she kills some of Archeus hench-vamps before Archeus beats her down. Drusilla and Archeus grumble a bit about their situation, mentioning the statue a few issues ago and the lack of getting it. Drusilla tries to calm him by saying they are ok, and if Nairia doesn’t want to help them, she can be bait instead.

Whilst all this is going on, Angel and the gang are working together with Inspector Brandt to find Nadira. They manage to find Archeus families feeding ground, a dingy place with lots of bodies hanging from the ceiling and a message on the wall “Angel, Daddy is coming to bring you home”.

Angel isn’t completely trusting himself with Archeus, and this could get exciting, will he turn sides? I also wonder if we would see anything of Darla and the Master. Yes they are dead, but are they really? And what about Connor? These are all from the sire-age of Archeus. Next few issues should be interesting!