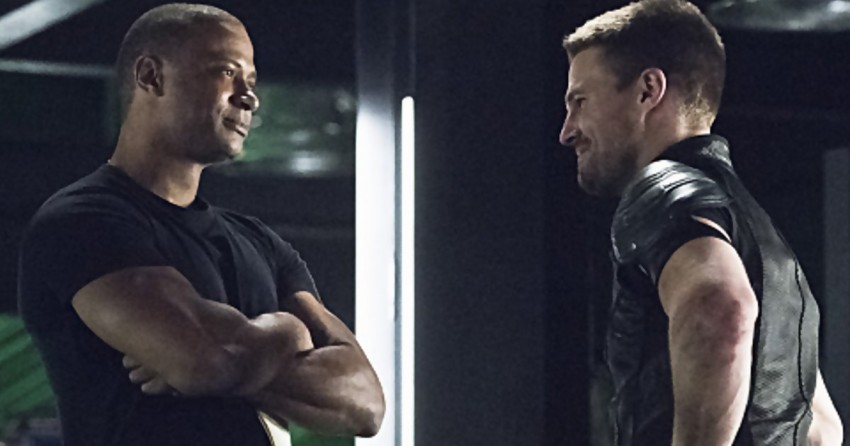 Diggle’s brother Andy is alive! But after eight years and a lot of secrets revealed, Diggle isn’t exactly pleased to see his brother in the flesh. Andy turns out to be one of Damien Darhk’s ghosts, a shock to everyone’s system. And because Diggle doesn’t forgive easily, he sees very little reason to even seek an explanation for all the bad in Andy’s past. Let’s dive right into…

In terms of action, the fight scenes in this episode were great. The choreography, the stunts, everything, even down to the lighting, was impressive and enjoyable. Team Arrow has turned into a well-oiled machine, efficient at pulling off elaborate plans (even when they aren’t successful). Part of the enjoyment of these fights is that things don’t always go according to plan. If they did, the fights wouldn’t thrill us with the potential of failing.

In terms of character, one of the biggest achievements of this episode was how each person managed to make one of his/her teammates better, a support system that Team Arrow brings both on and off the battlefield. This episode may have focused the most on the Diggle brothers, but it was definitely an ensemble effort. 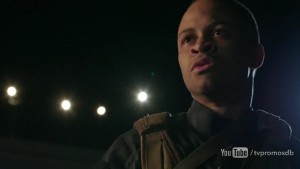 “I wish I was on Team Arrow. None of the ghosts get cool code names.” – Andy Diggle, probably. [Source: The CW Network]

Oliver and Diggle grew closer in this episode, which is always a good thing in my opinion. There have been plenty of brotherly moments between these two characters in past seasons, but this episode was especially meaningful because of the recent conflict between them. Diggle has finally given Oliver a second chance to be a good man, a good brother, and Oliver wants Digg to do the same for Andy, his actual brother. Otherwise, Oliver loses his hope that someone can come back to being good, no matter how much evil or darkness has invaded his/her life. That was the most profound part of the episode, and it was well done.

While we’re on the topic of Diggle, this episode was David Ramsey’s night to shine, and he didn’t disappoint. Watching him struggle not only to accept that Andy is alive but also working under Damien Darhk was heart-wrenching, and yet his character development was wonderful. As I said before, Diggle doesn’t forgive easily, nor does he believe in holding onto false hope for the sake of hope. He’s justifiably furious at Andy for allowing his family to suffer under the idea that he was dead, and furious that Andy would allow himself to become the horrible person described in that top-secret file. So let’s just say that, for the sake of this review, everything involving John Diggle was good.

Everything involving John Barrowman in this episode was also good, err, evil, err, I mean . . . well-intentioned no-goodness? Malcolm Merlyn made a pleasantly surprising return to offer Thea more help with her Pit sickness, encouraging her to feed the bloodlust by killing people who deserve death. While his intentions are sickly sweet, the new Ra’s al Ghul is still far from Father of the Year. 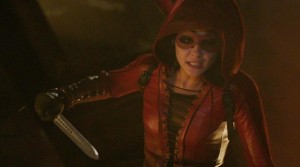 Speaking of Thea, her subplot this week took a fascinating turn: Damien Darhk can’t use his powers on her. Not only was she unaffected by his killer touch, but also her bloodlust faded afterwards. Before that, though, she was still struggling against the murderous impulse within her, and it unfortunately affected her date with Alex, the campaign adviser. As an added bonus, she beat the crap out of a creep who’d just made the disgusting comment, “You look like the kind of girl where ‘no’ means ‘yes’.”

The conflict between Oliver and Damien Darhk was strong this episode, as was Oliver’s campaign game. Oliver’s speeches continue to be good, and his final speech, while moving, had the extra benefit of being a big middle finger to Damien Darhk. And Darhk, true to form, stares right back at Oliver’s challenge, continuing to be a formidable villain. He was on form in this episode (much like every episode), from his intense interactions with Team Arrow to his merciless proceedings with his underlings. You can tell he loves being a villain, and in a different way than previous Big Bads. Instead of being driven by duty or a tragedy in his past, Darhk appears to simply get off on being powerful, godlike, and obeyed. Which makes him all the more intimidating and fascinating. 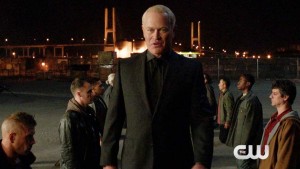 “My drugs bring all the boys to the yard.” – Damien Darhk, probably. [Source: The CW Network]

Despite her character setbacks in previous episodes, Laurel was surprisingly helpful this week. She gave Diggle some advice (from one person with a recently not-dead sibling to another) that was very meaningful and sweet. Plus, her role as the Black Canary is now cemented on the team, and she’s become such a benefit in their vigilantism.

Continuing the topic of powerful and helpful ladies, Felicity was once again doling out wisdom to her boys, Oliver and Ray. Ever the voice of reason, Felicity helped both of them realize the right course of action. First, she advised her current boyfriend to fight in the light, learn from his past mistakes, and say f*** you to Darhk. Second, she advised her ex-boyfriend to stop hiding in his deceased status. Ray decided to find his path, a new path (that will bring him right to Legends of Tomorrow).

Finally, the flashbacks. This week’s adventure on Lian Yu was more engaging than in previous episodes, and the complex politics between Oliver and the other drug/slave lords continues to be interesting. They’re also getting more dramatic, especially during that scene where Oliver is forced to carry out the whipping orders. For better or worse, we still don’t know where all of this is leading, but the one thing we can be sure of is that Reiter is getting more and more nefarious. “I’d like to dedicate this speech to my past self. Stay strong on that island, buddy.” – Oliver Queen, probably. [Source: The CW Network]

You know, there wasn’t much to complain about in this episode. It was a bit bothersome that John didn’t get the answers he wanted from Andy, but the team still has him locked up, so the assumption is that those unresolved answers will be addressed in a later episode. And one nitpicky thing I had was how, conveniently, the random ghost they happened to catch was Andy. Sure, it helped move the story along and came at the right time for the big reveal of “Hey, not dead!” But it still came across as too big of a coincidence.

I give this episode 9 out of 10. It was another fantastic episode, and while it may not have been the most shocking of the season, it did what Arrow needed at this point: it stopped building up Legends of Tomorrow and went back to the core of the show, the team being better together. It may seem cliché, but there really is no I in team, and having the support of those around him helped Diggle get through the earth-shattering truth of his brother being alive and not the man he thought he was. And although this episode didn’t resolve everything between the Diggle brothers, it provided a solid foundation to explore and conclude their issues in upcoming episodes. 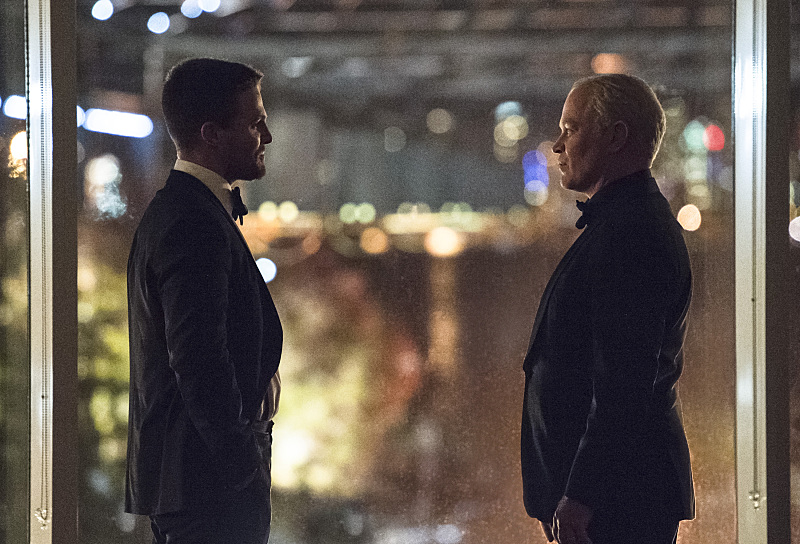 What did you think of the episode? Share your thoughts in the comments and enjoy some quotes from “Brotherhood.”

Ray to Felicity: “Thanks, I was wondering where my tooth went.”

Oliver to Thea: “Speedy, speedy. Thea, sorry. It’s a nickname. We have to go. Felicity called about about the thing. The dental problem.”
Thea: “Um, yes. Yeah, sorry. Our friend has this, uh, tooth issue.

Felicity to Oliver: “This has to be a better way than how you usually spend your evenings. Dressing in leather and tying people up.”
Random Lady: *Alarmed look*

Diggle to Oliver: “My brother needed me. The green one.”

Felicity to Oliver: “You didn’t decide to run for mayor to take down Darhk, you did it to give this city something the Green Arrow can’t give them. Hope. Inspiration. Don’t lose sight of that. Not even for John.”

Diggle: “Felicity, can you give us a minute?”
Felicity: “No, I think I should stay.”
Diggle: *Gives her a significant look*
Felicity: “I just, uh, I remembered I got that . . . thing in the whatever with the what’s it.”

Damien to Thea: “It’s Merida. Aren’t you out a little bit past your bedtime?” 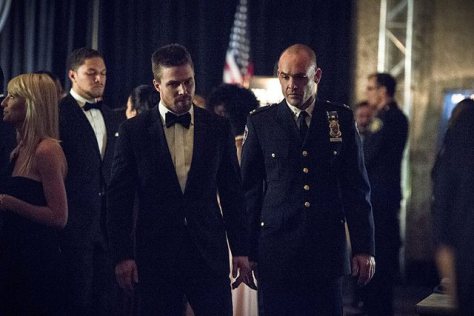 Lance: “Not bad. Not quite as powerful as the Green Arrow’s, but not bad.” Oliver: “Yeah? Maybe I should get him to endorse me.” [Source: The CW Network]

Felicity: “Leaving to fight Ra’s on a mountaintop. Going undercover with the League of Assassins. Dating the Huntress…”
Oliver: “What are you doing?”
Felicity: “Oh, I’m just listing all of the terrible ideas you’ve had over the past three years, of which throwing in with Damien Darhk has got to be the worst.”

Diggle: “Oliver, you don’t know. You have this inexplicable way of excusing everything just because it’s family.”
Oliver: “It’s not inexplicable, I’m asking you to–I’m asking you to hold out hope for Andy because I need that hope. I need to believe that no matter what happens in our lives, no matter how much darkness infects us, I need to believe that we can come back from that!”

Laurel: “There must be a million things going through your head right now. All I’m saying is make one of them an appreciation for the fact that your brother is actually alive.”
Diggle: “Why? So I can hold out some false hope that he might actually be decent? He doesn’t deserve that.”
Laurel: “No, he probably doesn’t, but you do.”