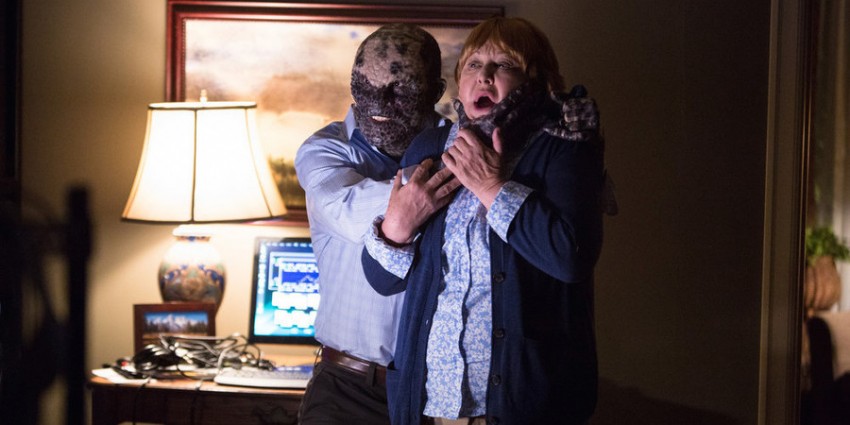 Grimm 502 Review: “Clear and Wesen Danger” Isn’t That Clear After All

“Cherish those who seek the truth, but beware those who find it.”

After welcoming a new baby into the world, Adalind and Nick attempt to figure things out while Nick takes some time off of work and Hank gets a new partner during Nick’s absence. Meanwhile, Rosalee and Monroe help to figure out the answer behind the latest Wesen mystery and help Nick prepare for the new addition to his new family.

A lot has happened since Juliette died and her body subsequently disappeared (along with Trubel) while Adalind went into labor and welcomed Nick’s son into the world. And Nick has barely had time to breathe and digest any of this before he’s called back to help with a new Wesen mystery. In “Clear and Wesen Danger” when an assistant is questioned after his boss is murdered, Hank quickly suspects the wimpy-looking, little man for the murder, so he  calls in Nick to confirm it. Due to Juliette’s death and Nick’s new son, Nick has some time off, so Hank has a new partner. That means Hank has to figure out all these Wesen mysteries behind his new partner’s back. It’s not the easiest situation to work around, but Hank doesn’t have much of a choice in this one. You think the captain could have at least found someone else who knew something about Wesen or somehow worked it out so Hank would be working with Wu, rather than put Hank with a new guy who was completely in the dark about it all. At least he had Wu to work with when Nick wasn’t available. One thing I’ll always be glad for is Wu’s knowledge of the grim world Nick and Hank deal with every day. It helps having an extra person when tracking down suspects.

As it turns out, Hank was right about the assistant. This new Wesen, a Quijada Vil, even ends up adding to the mystery behind Trubel’s disappearance and Agent Chavez’s death. During the investigation into the assistant, the same mark that was left at the place where Agent Chavez was murdered shows up after the Quijada Vil brutally murders some U.S. marshals. There’s no trailer to seek out for answers anymore thanks to Juliette, and Rosalee and Monroe are at a loss as well. Clearly, this new group has many resources and Wesen all over joining the movement…and now they have a lot more money thanks to the Quijada Vil and Drang-Zorn’s embezzling. These Wesen are a dedicated bunch, too, even willing to die for the cause all in the name of “Occultatum Libera” or to “Free the Hidden.” I wonder if these Wesen are working toward a common goal of outing their kind around the globe. No more hiding in the shadows, no more sneaking around, just free to live life as humans are wont to do…and I guess that means free to murder as is their nature for some. 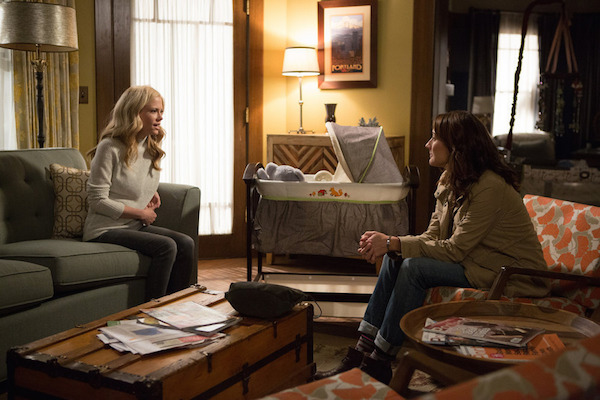 Meanwhile, Adalind is doing her best to turn over a new leaf with Nick and their newborn baby, Kelly. As much as I have enjoyed Adalind on the show, I am finding it difficult to accept her new position in Nick’s life. It is definitely a twist, but considering the crap she pulled in the past, it just doesn’t make it very easy to like or sympathize with her. With Juliette, whom I had always adored on the show, when she went off the deep end and fully embraced the bitch that comes with her new found Wesen nature, I still had some hope that she’d be back at Nick’s side. After her final actions, I wasn’t sure if she could ever find redemption and was actually relieved to see her go, but I had always loved and enjoyed the relationship she had with Nick prior to that. Placing Adalind in that position (or at least close to that position) just seems wrong to me…even if she is trying to be good and it was her Hexenbiest powers that made her the way she was before. As for Kelly, I’m curious about what he will turn out to be since he is the son of a Grimm and a Hexenbiest. What could that mean for him?

Lastly, adding to the mystery this season is a glimpse of a door shown at the end of “Clear and Wesen Danger.” While one man keeps watch, another emerges after we listen to some ka-pows and pops from behind it. Someone was being hit or fighting or something. If it was Trubel, I’m leaning toward torture, but if these are Chavez’s people and they had tried to bring Trubel in peaceably prior to Juliette’s death, than it could be training, right? RIGHT? Of course, that’s not usually how these things work. My other theory is that maybe it’s Juliette behind the door. Stay with me for a moment, here. They took her body and we haven’t seen her since. She was supposedly extremely powerful and who knows what this organization is capable of doing. Maybe they took her body to revive her or save her and bring her back to fight the Grimm or something else. I’m guessing that’s not the case and Juliette is really dead, but I just thought I’d throw that out there anyway. Only time will tell, I guess.