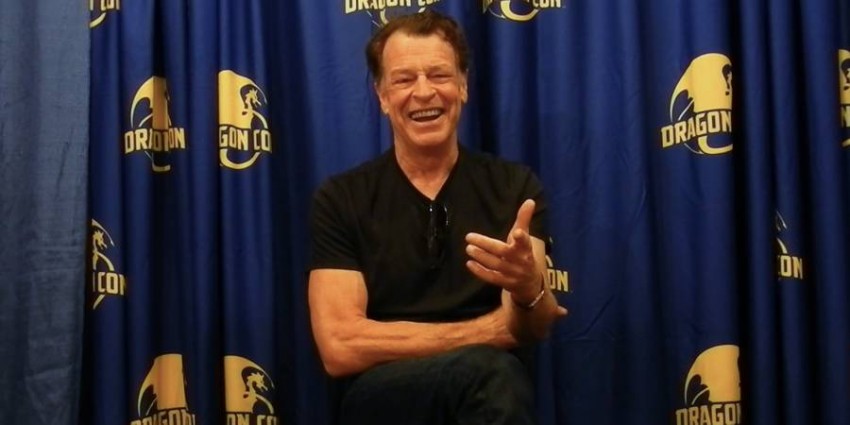 John Noble has played memorable characters in so many projects – Fringe, The Lord of the Rings, Sleepy Hollow, and now Elementary, to name just a few. He’s also done plenty of work away from the camera as a voice actor, most notably in video games like the recent Batman: Arkham Knight. But to be completely honest, I was there to interview the man who embodied Walter Bishop, one of the best television characters ever brought to screen.

When Fringe came along, it filled an X-Files-shaped hole in my heart with a weirdness and twisted sense of humor the likes of which I feared I’d never see on TV again. Far from an X-Files clone, however, Fringe took some of that show’s core elements, added several new ones of its own, and the result was a remarkably intriguing and thoroughly entertaining journey into science-fiction weirdness. With all his idiosyncrasies, and recreational drug use, Walter quickly became The Most Interesting Man on Television, but in the weirdest, most wonderful way. As the character developed, he also became the anchor, the core, of that show. Every character was key, but in a literal analogy John Noble’s Walter Bishop was the Master Key. “The one key to rule them all!” Hmm, has a nice, um, ring to it, don’t you think?

Before we get to the interview itself, let me begin with an explanation and an apology.

First, the explanation: This interview was conducted at Dragon Con at the ungodly hour of 9:00 am. Any convention-goer knows that that’s akin to scheduling something at 4 or 5 in the morning in the real world. I mean, at 9 in the morning some people are just getting to bed from the night before. Don’t even get me started on how it affected those of us from time zones that effectively made it even earlier. But Mr. Noble was a true professional, showing up happy and ready to answer all our questions.

Now, the apology: This goes out to the wonderful Mr. John Noble to whom I owe the biggest apology for being so tardy in getting this interview online. After his generosity and kindness at an hour when only the undead should be walking, the proper thing to do would’ve been for me to get this posted ASAP, but life happens and many things fell by the wayside. Sadly, this was one of them.

I would also like to apologize to Mr. Noble for being part of the reason he had to be awake, alert, and in front of cameras held by overly excited, nervous baboons such as myself asking inane questions about things he’s probably answered 1000 times already at nine-stinking-o-clock.  Of course, when he took that first sip of his coffee, I kinda had to hate him … just a little. (It was that damned early.)

Walter Bishop getting his “fix” while we watch in sleep-deprived despair. (Image by Tom Gardiner)

But no more delays! By writing and posting this I am seeking redemption – forgiveness for my transgressions. I don’t want one of my favorite actors who created one of my absolute favorite characters of all time to think I don’t appreciate and love his work. The fact is, I do, I’m just lazy and stupid.

This interview was conducted in a relatively small room with no audio system at all. While there were several other reporters present, I was alone in the front row, save for one other reporter. All the rest sat behind us (chickens!) and due to the acoustics in the room and lack of a sound system my camera couldn’t pick up their questions. So, for reasons of practicality (I swear!), please indulge my vanity when I present you with an interview edited down to just my questions and Mr. Noble’s answers to them. Even after all the editing, my interview still clocks in at just over 9 minutes.  That’s like 3 times the attention span of the average internet user.

Oh, and it’s quiet, as the title implies, but it was some of the most fun I’ve ever had, especially at such an early hour. It’s not every day you get to sit 5 feet away from Walter Bishop and ask him all the questions. For my purposes, we covered Fringe, Sleepy Hollow, and his latest role as Morland Holmes, Sherlock’s father, on CBS’ Elementary.

The one thing I didn’t ask that I wish I’d have thought of was, “How would you feel about reprising Walter Bishop on an episode of Doctor Who?” When I thought of this question in the shower about a month after the interview was conducted, I slammed my fist against the shower wall. How could I have been so stupid as to not think of this pairing before? Also, why do all the good ideas come to you when you’re in the shower? There’s nothing to write on in there!

Hopefully, I’ll get a chance to interview Mr. Noble again in the near future and ask this very question. I can just see the hijinks when Walter meets Peter Capaldi’s Doctor. The dialogue alone would be priceless.