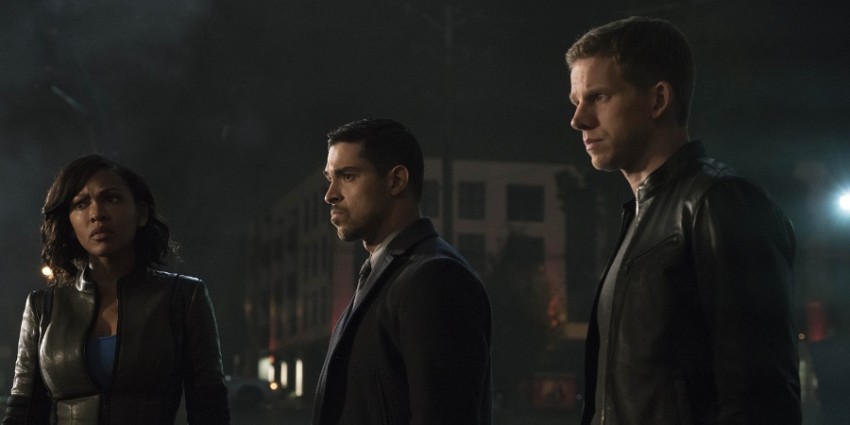 I’ve said throughout the review process, this series has a solid foundation to launch from and yet, too many misses and inconsistencies. There is so little time for a show to develop these days, it must come out of the gate with purpose and the “it” factor to keep an audience coming back for more. I’m incredibly frustrated. It is near the end of the season and there are still evident growing pains.

This offering only proves to increase the frustration level. I find myself not caring about the outcome of the main case to be solved or the continuing character driven storylines. The many elements don’t flow well together. Too many things are thrown into the mix for a satisfactory viewing experience. 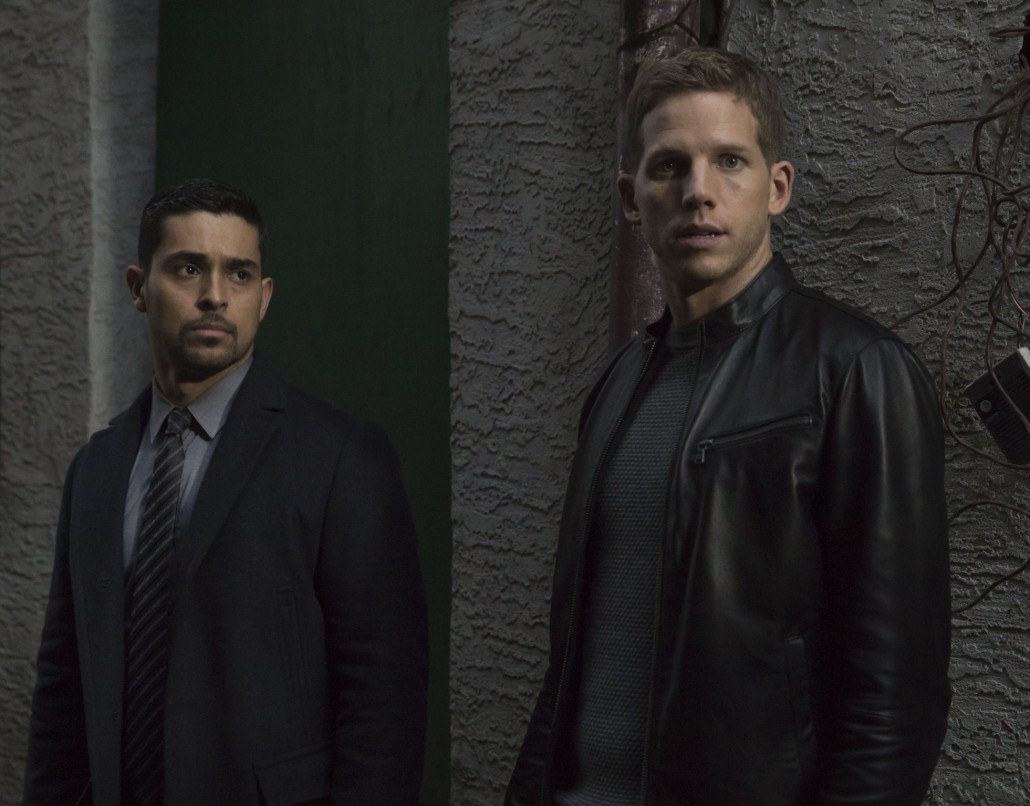 Lieutenant Blake shows an excessive eagerness toward understanding how Detective Vega and Dash are closing so many Hawk-Eye cases.  There is not an iota of subtlety in his technique. On top of Blake tagging along on their case, Dash starts to show off his Precog moves at the diner, as if only he and Vega are together. Astonishingly, Vega makes no effort to remind Dash they are in watched company. Only minutes in and I am thinking the writers have simply given up.  I am almost waiting for Vega to put on a tight tee shirt that says, “I’m with Precog.”  It is painfully obvious, tonight is the night Dash will be discovered.

When the delivery boy Felix is taken to the precinct for questioning, Vega is full throttle in his face because they find a gun and drugs among his delivery packages. First she pulls out Dash’s octopus sketch and asks the boy if he knows the tattoo. Then, when Blake shuts the interview down, she tells him with utmost assurance, the boy is going to shoot someone tonight.  She is effectively putting a large red flag up for Blake to follow. Hey we’re up to something. Of course Blake is suspicious and thinks the information is from her still nameless CI. It doesn’t take a genius to see where this is going.

It goes from bad to worse. Blake shows up at Arthur’s table after Dash and Vega leave. Blake put a tracker on the sketch. Now he believes Arthur is the confidential informant. The writers are making this difficult to watch. The smart writing is all but missing thus far.  I am sharing Arthur’s anger at this point.

The final blow to Dash’s identity takes place back at the diner. They return to find the suspect and are told the diner is closed. They are standing in an empty restaurant during normal business hours without thinking it is strange at all. That is, until Dash goes into full Precog mode in front of Blake.  He tells them the waitress is not a waitress, there is a robbery in progress, how many are involved, and who has weapons, before leading them into the kitchen where all hell breaks loose. The final assault on his hidden identity is saving Blake from being shot. Vega acts as if all this foreknowledge is normal. Blake has the shocked epiphany, that Dash is one of them.  This is a most anti-climactic way of exposing Dash for who he truly is.  I know the show is rumored to be on the cancellation block, but the writers didn’t expect that reality. This is disappointing and weak.

The last of the worst, is adding another storyline about a future terror attack into the episode by Blumfeld of the DIA. The story arc has been working toward his character somehow bringing Pre-Crime back. How tidy, to have a national threat right at the time Blake finds out Dash and Arthur are Precogs. Again, the team seems to have given up on the show. 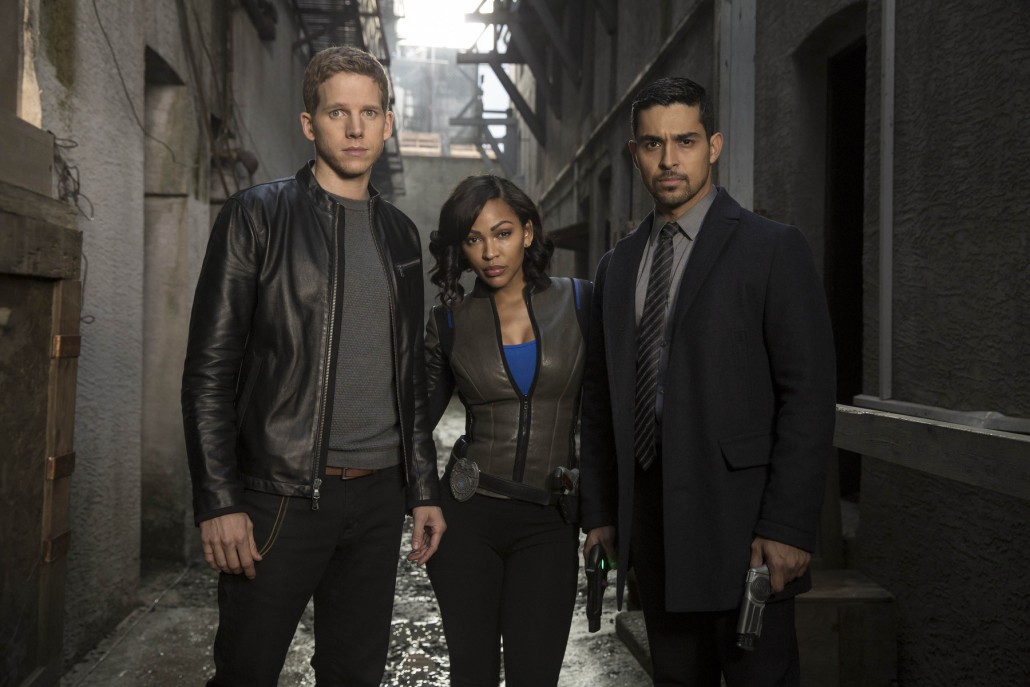 Gaining background on Blake that ties him to “The American Dream” theme and the defunct Pre-Crime program is enlightening. It explains why he is so driven, how he almost made the choice that would have had him locked up, instead of his abusive step-father seen in the Precogs vision. It is revealed that he is a loving and devoted son to his mother.  He has a heart for the delivery boy, he also was a “fourteen”. An immigrant without the same rights. Through Dash’s information, he is able to save this boy from murdering anyone and shut down a hijack crew.

My three favorite moments involve Dash. First, when he baits Blake to help them solve this one last case by saying, “Come on Lieutenant, before you turn me in, don’t you want to run with a Precog just once?” That is the spark I expect to see here. Second, during the tense scenes amongst the gang, Dash moves toward a window with a bad guy following him, and at the last second moves out the way so the returning drone flies into the bad guy’s face. Blood splatters all over Dash, including his face, and the game is on. The trio is able to take down the others. Wonderfully, Dash doesn’t clean his face off. He leaves it, warrior style. Lastly, without cleaning up, he goes to see Arthur to tell him Blake knows who he is, and likely Arthur too. Already angry, Arthur punches Dash in the face. That’s right, working it out like brothers often do.

Overall, even with the few exceptional moments, this is my least favorite episode of the season. Only two more episodes left. Only viewing will tell if there is hope for Minority Report or not.