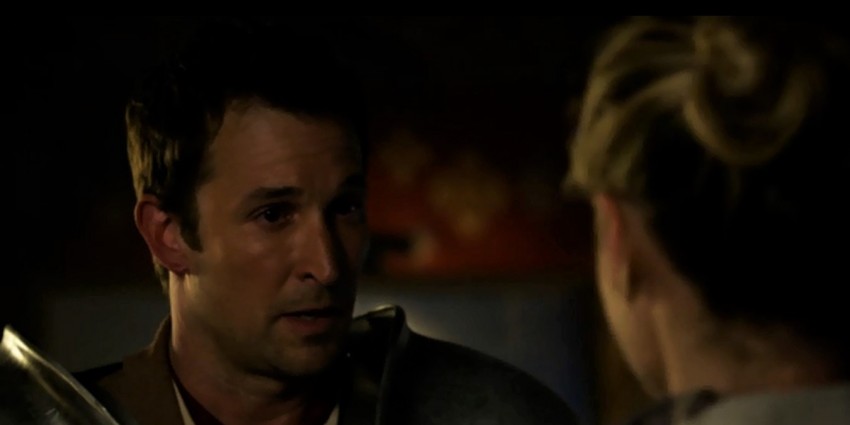 The Librarians Ep 2.05 – And The Hollow Men Review

The best of “And The Hollow Men” episode, is Ray, AKA the Spirit of the Library. As I suggested in an earlier review, I believe one character would be highlighted in each episode. That is the case here, the Spirit of the Library in human form. Like me, the Doctor Who fans screamed in delight, as this mirrors the episode in which the TARDIS takes human form. It is quite the adventure getting to the point in the episode that this twist is figured out. I’ll get back to the wonders of Ray in a bit. But first, there is much to offer up in the way of what makes this episode tick.

The recurring theme of team work is plain to see. Flynn is not by nature a team player, but he is trying to be. Eve needs him to be a team player, in all ways.  Everything in this episode is built upon this concept.

We see that Flynn and Eve are still out of sync.  They end up working on locating the same artifact, because they are not checking in with each other. They are not a solid couple or team right now. It’s not a fit. He’s a runner, while she’s a builder. This is a heartbreaking truth, and in the end, she doesn’t even kiss him goodbye. Much to Eve’s dismay, even Moriarty can see it. He uses the opportunity, when they team up to find Flynn and the staff, to deftly point it out to her. She knows the truth all along, but begins to accept it, after her conversation with Moriarty. Of course, Moriarty flirts with her and exploits the gap he sees between them. Perhaps, there will be an arch-villain Fictional and mortal Eve hook-up in the future. Never say never in fantasy television. 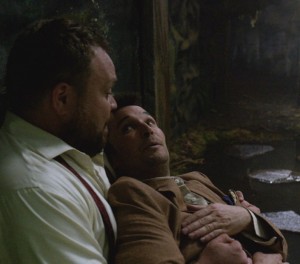 Flynn seems to begin to gravitate toward the concept of team, only after he figures out Ray is the Spirit of the Library. They must work together or the Library will die. The Librarian and Library go hand in hand. Almost gleefully Flynn helps Ray. He’s out of his mind excited to talk to the Library, to connect on a human level. Sadly Ray remembers nothing, hence the need for the Staff of Zathustra. The Library was damaged when it went into the void. Ultimately, like a buddy movie, they effortlessly work together.  They make it to a positive result and conclusion.

What about Moriarty and Eve? They team up after the portal back to the injured Library closes before Eve can get back through. She needs a guide to find the kidnapped Flynn and he needs a driver.  How Moriarty speaks to her needs is interesting. She’s as allured as we are by his charms and smarts. She is finding someone who understands her more than Flynn in this villain. He is still working for Prospero, but wants his freedom. She needs to trust he will not turn on her since he is under duress. The enemy of my enemy is my friend perhaps.

Jenkins, of course has the trio of Stone, Zeke, and Cassandra even in a futile manner, assist him to keep the Library alive. Even with it looking grim, they stick together no matter what. Well, Zeke thinks about leaving in true Zeke form, but stays put.

Now onto my favorite part, Ray. The actor, Drew Powell, playing him is amazing. He’s funny, charming, and bigger than life. It’s a spot on portrayal of the huge character, that is the Spirit of the Library. He needs, Flynn to tell him who he is. He has no memory. He seems crazed using the distorted voice, but there’s a desperate benevolence about him. When he waves his finger in his face, one of those exceptional moments of spark happens. It is utterly charming and hilarious at the same time. He is in pain, but feels better with Flynn around.  He keeps growing on me as a viewer. Their evolving relationship unfolds in a sweet and endearing way.  Ray acting similar to a kid in a candy store with the milk shakes and the way he expresses emotions and with physicality, is exactly what a young human child would do. The Library as human is very young. It’s just right. He is a joy to watch. His acting is over the top in a wonderfully comforting way.  When they find the staff and he gains his memories back, Flynn is deeply moved when Ray tells him he is his best friend. Cue the “aw” sound from everyone watching. This is where Flynn’s heart lies.

It’s bittersweet when Ray has to become energy again to restore the Library to health. They must say goodbye.  Flynn is teary eyed and sorrowful.  He doesn’t want to let go of Ray in the flesh, not unlike the Doctor, when he must allow the TARDIS to be restored. It isn’t lost on me, that Flynn doesn’t act this way when he says goodbye to Eve. The Library is his first love. His best friend too. 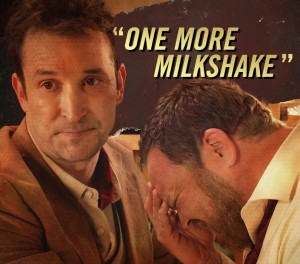 As a side note, a quirky small theme worth a mention for the wordsmith types, the use of adding a “–y” to add another element of uniformity. Globe-y, banter-y, and argue-y, are the ones I caught.  The other word play has characters reinforcing ideas by reciting similar things. For example, Eve and Flynn talk about traps. Ray and Moriarity also call Flynn a runner. It’s the small details that make this show special. The writer’s leave clues for us to ferret out.

It’s another satisfying romp, with enough warm fuzzy feelings to last the week, until next time.

Last, but not least, are the quotable quotes that are worth sharing.

“Do you have anything better than globe-y crystal thing?” Eve

A room should have the decency to stay in one place.” Jenkins

“We did not agree and that is much more a goal than a plan.” Eve

“Wow. This is usually a lot banter-y not argue-y. We’re way over here in argue-y.” Flynn

“Get it through your head, this is the team now, it’s not just you.” Eve

“Stop showing off that you know how to pronounce Zara…thustra.” Eve

“Prospero. Not Prospero. We need to find Flynn.” Eve

“Now is not the time for naming. Now, right now I catalogue, and you SIT!” Ray Glasney

“No.No.No.No. You’ll run. You’re a runner. You’re like the Gingerbread Man. But not this time. Mnh mnh.” Ray

“It’s an adventure. It’s going to be great, just you and me, Flynn.” Ray

“All I know is there’s wild magic loose in the world.” Ray

“Cassandra, please do not fangirl over the arch-villain.” Eve

“When it goes completely dark, the Library is dead.” Jenkins

“If you don’t trust my virtue, trust my self-interest.” Moriarty

“Am seeing someone who’s not fictional.” Eve

“I’m not really in the bad guy business.” Eve

“Keep it in your pants English. They went this way.” Eve 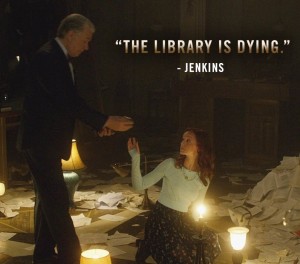