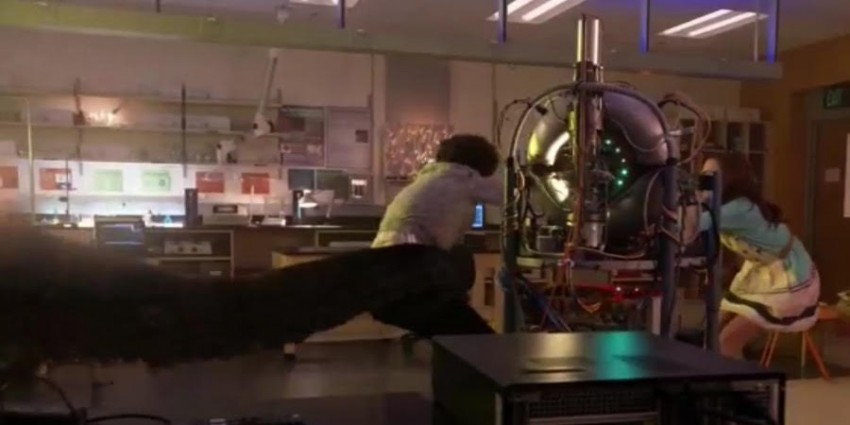 The Librarians – And the Cost of Education 0204 Review

Last season we were introduced to a cast of characters, who would take on what Flynn alone had done prior. We’re getting to know them better. We’re seeing deeper layers of dimension and growth. This is a wonderful occurrence in a show that each week has a reliable storyline of magical mystery to unravel. It is quirky, funny, and best of all, brainy. The series could simply lean on the magic to be wrangled, the villains to be beaten, without the underlying development, not unlike what The Librarian movies have done in the past. It’s a wise move to give more insight into each player as we watch, including the Library herself. I don’t know if the Library is a she, but I am going with it. What a hoot it is finding out the different personality characteristics, the emotional make-up, and the differing rooms the Library has to offer. It’s bountiful creative fodder for the writing team to pull from. Happily, it looks like the series is being set up for a multi-season run.

After watching the first four episodes of Season Two, that’s what I see happening. I venture with each upcoming week, one character will be emphasized to give us the important details and character knowledge. 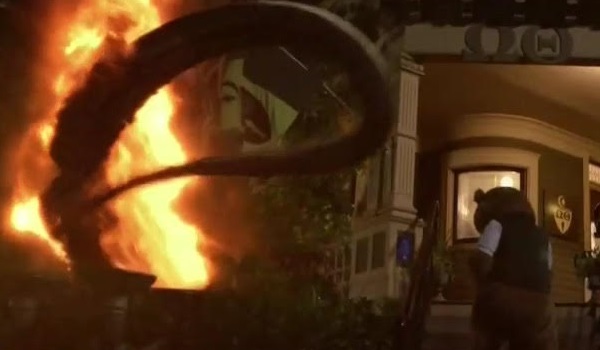 So far what we have learned beyond the wonders of magic?

The two episode season opener showed what makes Flynn and Eve tick. We were left with a sense of who they are together, solo, and as part of the team. He likes freedom and to fly without a plan. Eve likes order and requires a plan. Together they found the compromise for both to exist. Jenkins is far older than imagined. He apparently has a rich history. I look forward to finding the details of who he is and learning of his experiences.

The next week dealt with Stone and his father. It was a dark episode without a happy ending for them, but a satisfied ending for Stone. From the anger, disappointment, the reality that people are imperfect, and all one can do is work on oneself, he found his core strength. He claimed himself, personally and professionally. His name is honorable.

These threads bind together the exciting and fantastical weekly case to be solved, with an emotional connection for the viewing audience to return to. This series has more to offer beyond the realm magic.

The Library herself has the continuing storyline of her being damaged, hurting, and frail. Could holding all the magic in, hiding it, be part of the problem? I do wonder.

Onto this episode. In premise, it’s about a small liberal arts college built upon an occultist’s design, yet at the heart, it’s really about Cassandra finding her confidence, her voice, and her path.

Cassandra Cillian is placed in a position to question what’s right and what’s expected. She makes choices in this episode that expose magic, define her purpose, and fortify her strength. When she and Zeke meet Lucy, a young magic hunter, she must decide whether to hide magic or to allow this curious young woman into the circle of knowledge. Her attempts to dissuade Lucy don’t work, so she wisely brings her along. The role of The Librarian is changing and Cassandra is pushing the envelope. You see, this young woman is but one person coming across magic in the real world. It’s becoming problematic to treat each event as Eve puts it, “as swamp gas”.  This young woman unwittingly using magic, is a catalyst for an evolution of objective within the Library and for The Librarians.  A sub plot to keep our eyes upon.

Cassandra in her decision to do the right thing over the expected thing, brings her in contact with the women of the lake. These women are in between space and time. In a place where magic and science converge. They investigate. She is invited to join them. She declines, choosing to remain a librarian. Jenkins is concerned over her drawing the attention of the lake women. She reminds him whatever happens next, she chose The Library. Another shoe or many will likely come from this.

Cassandra has come into her own, for the first time. She is no longer meek or insecure. I expect her to go toe to toe with any person or problem that arises. She is meant for greatness.  It’s not always popular or common, for stand-alone strong female characters to be written. This is another reason why this show is remarkable. Women are not relegated to that of arm candy or the background.

So, what do I have to say about the magic storyline?

A tentacle monster that feeds on hubris, arrogance, and pride has been accidentally summoned by Lucy building her mini particle accelerator. How? The college was built as a summoning circle by its founder, famous occultist, Wexler.  The head cheerleader says the funniest repetitive line throughout the episode, “Just like every other college, 1 in 5 (mascots, teachers, students)…” disappear or leave in the middle of the night. This young woman’s blind belief of what’s normal, is amusing.

A three beat of disappearance is used. A mascot, a professor, and Lucy. After the professor was snatched in front of Eve and Stone, Jenkins figures out what the monster is.  The Hubristic, a large monster that exists in a different dimension. How clever to be summoned to a college campus where pep rallies and many other sorts of prideful behaviors exist. A veritable feasting ground for such a creature.

My favorite parts of this episode, in no particular order are:

Zeke making friends with the gargoyle, after breaking the rule of never looking at a gargoyle. He named him Stumpy. Then he cried when Stumpy sacrificed himself to the tentacle monster to save Zeke. An “aw” set of moments to be sure.

Stone fangirling over the professor until he meets him in person. He then argues with him over the existence of magic, refers to him as a windbag and a prick, before taking on the class after the professor gets nabbed by the monster. When he is teaching, he shines. He closes the class with this beauty of a saying, “Because after all, architecture is art, that we live in.”  I almost shed a tear.

The consensus that Zeke’s ego can keep the monster busy, while Cassandra enters the dimension to save Lucy, is plain funny. Zeke and Stone drive around campus while Zeke talks about himself. Stone has to bait him once in a while to keep the momentum. His ego keeps the monster busy chasing them all over campus just long enough for Cassandra to get Lucy back. I expect Zeke to gain some humility down the line, but this episode is not that day.

Zeke stealing the missing mascot’s invite to the special frat house followed by this banter, “I want to lecture you on the morality of stealing from a missing person, but I know you won’t listen…” Cassie “I’m not listening now.” Zeke Like the rest of the cast, excellent comedic timing that elevates the written script.

Lastly, the head cheerleader being so earnest about the statistics of human loss around the campus being normal everywhere.

Now it’s time for the quotable quotes. Please share any favorites that I missed.

“Has anyone found the occult section of the library?” Jenkins

“I hope he’s dead in a ditch.” Head Cheerleader

“We didn’t even have a weird wart outbreak this year. You know those warts that give you screaming nightmares.” Head Cheerleader “Also not a thing.” Eve

“I wonder if a small liberal arts school believing they can beat Michigan, is magical delusion or regular delusion.” Eve

“By weird history, you mean they throw parties without beer?’ Zeke

“No like you need an invite to get into the house, on paper.” Student

“There are magic hunters now?” Zeke

“Ooh everything is sticky now.” Cassandra

‘I got this. I’m a Librarian.” Cassandra

“So you’re denying the existence of Stonehenge?” Stone to Professor

“Dilatant. Isn’t this when you smack him with a glove?” Eve

“So we have a tentacle monster…” Jenkins

“No sorry, not easy peasy.” Jenkins

“Wow that is a whole lot of bad crammed into one small sentence.” Eve

“Why are you trying to stop me?” Lucy

“Because you ae doing magic and you don’t understand how dangerous it is.” Cassandra

“All those college kids thinking they can beat Michigan, it’ll be a feast.” Eve on the impending Pep Rally

“Yeah but I never had normal to begin with.” Cassandra to Lucy

“Whatever happens next, please remember that I chose to stay. For the first time I feel like I’m choosing my life instead of running after someone else’s choices. I like this better” Cassandra