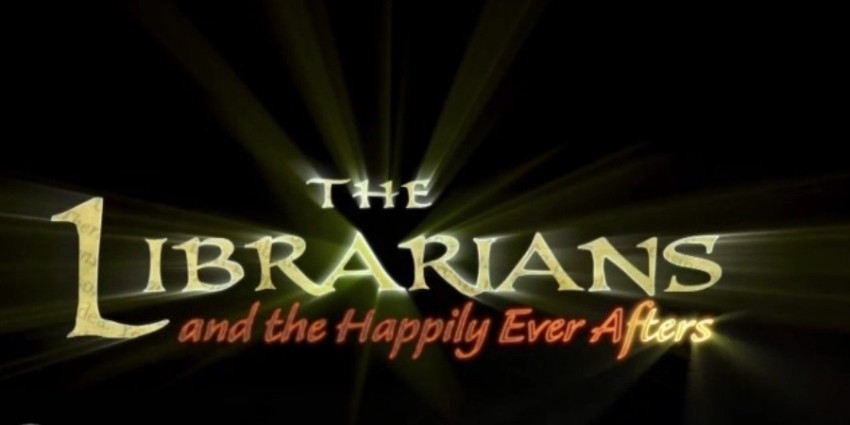 The Librarians Ep. 2.09 – And the Happily Ever Afters Review

“You think to slip enchantment’s weight, instead embrace your fondest fate.” Prospero

The Librarians and the Guardian are missing. Jenkins has never heard of them. Something is magically amiss in, “The Librarians And the Happily Ever Afters”. The unexpected twists and turns reveals Prospero weaving his story spell, to keep them all busy in the make believe world of their heart’s desires, while he makes dastardly plans for the future.

What’s unique in this episode is The Librarians themselves being used as batteries to provide the power to the magic. In order to break the spell, they have to reject their happily ever after and reclaim reality. The talisman each wears is the tool in which the spell continues to assert itself. The more they work to gain freedom from it, the stronger the spell becomes out of self-preservation. There are also layers to the story spell with James Moriarty being a part of it as a Fictional, and Flynn being under the spell whilst finding a way to end it. Figuring out how a Fictional could participate willingly in the story spell, is far above my nerdish pay grade.

Let’s talk about the retro awesomeness. Eve, Colonel Eve Baird, has Farrah Fawcett hair and Charlie’s Angels/TJ Hooker styling. Her outfit could not get more closely fitted. Women police officers were always good looking with custom uniforms during the ’70s/’80s television shows. She is at once perky, small town friendly, smart but not too smart, pretty, put together, all while fighting “crime” for the good of her small town. 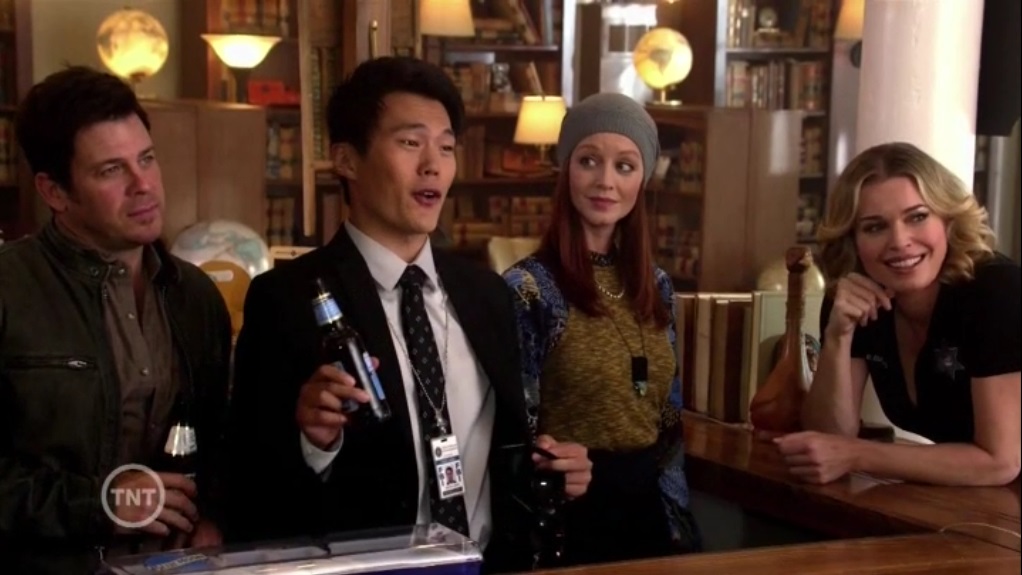 When Jones and Flynn are in a crime related pursuit, the upbeat music, the on foot chase, the excessive local criminal activity, is heavenly 1970s cop show homage. It almost ventures into pure campiness, yet stays great fun. Jones is like a kid in a cop drama candy store.

Eve, Jones, Stone, and Cassandra together own a bar called The Final Draft. This whole idea is a classic nod to Cheers. You remember, the place where everyone knows your name. When James Moriarty comes in, they all yell his name in unison.  They are all drinking a beer and hanging out. The unusual thing about this bar is the many books in it. Then it is easily explained, this is the headquarters they fight high level art crime from, as a team. Yes, of course, that is totally normal.  Flynn is so agitated and the others act as if it’s nothing.

Next, the occupations they all hold are what a little kid might desire and dream up. Stone teaches in eleven different departments at the local university, while saving worldwide heritage locations from tomb raiders. Jones is an FBI agent who arrests people for the local sheriff. Sit with that for a moment. Cassandra is Commander Cillian, astronaut, physicist, and local TV star. Oh, and she has ponies. Eve is the small town sheriff. Moriarty is the Mayor. He’s putting his evil genius to work for sure. To top that all off, he and Eve are boyfriend/girlfriend. This story spell is pulling from anything they could want to be.  Why not hold 1 or 10 jobs at once? That’s the imagination of children. Moriarty is the odd one here since he is a Fictional. He simply wants Eve and to pretend to be real. His story is sad and tragic. While they are fulfilling desires and escaping reality, he knows he’s not real to begin with and there’s no place for him. 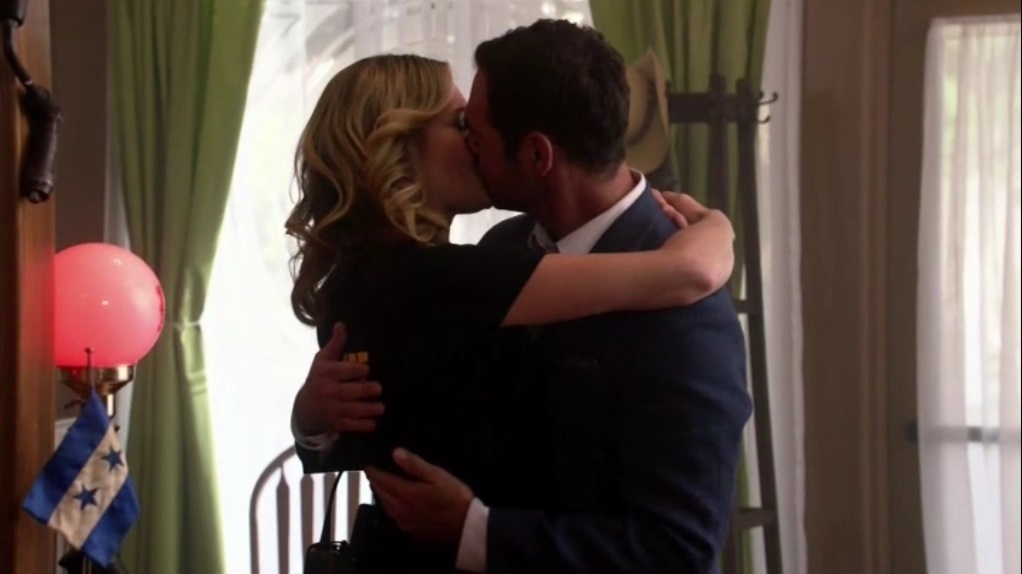 Noah Wyle, aka Flynn Carsen, is the absolute best part of this episode. He uses great expressiveness verbally and physically in nearly every scene. The assertive acting fits like the right puzzle piece to build from. He is dealing with his feelings for Eve and finds resolution from his need to be a solo Librarian, all the while working to fix the serious problem at hand. He’s insanely jealous of Eve and Moriarty. When they kiss in front of him, he loses it in a funny and sincere way. Remember, Flynn previously had left Eve to go find the missing artifacts on his own, and she refused to kiss him goodbye. Their relationship was left hanging by a thread. For him to see Moriarty as her boyfriend, is a confounding knife to his heart. He does figure it out. That issue gets addressed below. When it comes to how he views himself and where he fits, he finally gets the memo and becomes the team player he needs to be.  His profession of being a Librarian, as opposed to the Librarian, clinches the conscious character change. I’m glad to see that thread coming to a closure. I hope that means there will be more Flynn in future episodes.

I would be remiss in not mentioning the fantastical fairy, Ariel. She shows up as a beautiful, mysterious outsider with an Irish brogue. She’s there hidden in the spell so Prospero cannot find her. She’s angry over being trapped by him. Fearing for what he is planning in the world, she chooses the story spell location as a safe haven. Then she meets the lot of them and Flynn ropes her into helping him. Through her knowledge and reluctant aid, the spell is fully identified and a plan is hatched. She is fiery and feisty as one would expect a fairy folk to be. With her disappearing before the spell is completely broken, we will have to wait for the season finale, to find out what happens to her.

The last of the best things are the kisses Flynn and Eve share. Kissing has been an ongoing theme between this whole season. Will they kiss or not? Is the timing good? Are they a couple at all? Why are they together? These questions are mostly answered to my satisfaction. Flynn brings Eve back to reality by kissing her well. As Ariel puts it, that of true love’s kiss. It’s more real than any other kiss they have shared. Then at the end of the episode, Eve plants a determined kiss on Flynn to pull him out of the spell still affecting him. With that, his talisman, the last to be destroyed, is placed at the foot of the totem pole and he declares who he is. A kiss is never just a kiss, but these powerfully real kisses saved the team and stopped the happily ever after dream.

Every week it gets better and better. I look forward to the upcoming season finale. 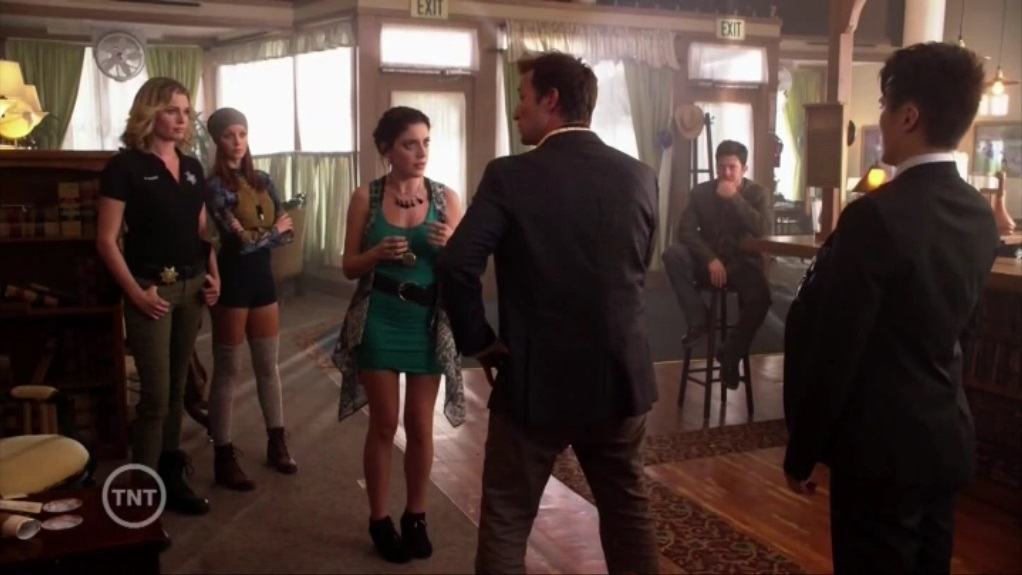 To wrap it all up, the quotable quotes uttered in this episode:

“I wanted to settle down, in a little town where everybody knows your name.” Eve

“I also have ponies.” Cassandra

“You’re all here together, in a bar, that has an unusual amount of books.” Flynn

“I’m a rule breaking maverick, but I get results.” Ezekiel

“I asked him out on a couple of dates. I wouldn’t call them magical, but I like a man with brains.” Eve

“And nobody has a problem with this? None of this?” Flynn

“Another moon hoax conspiracy nut. I bet you don’t even like ponies.” Cassandra

“It’s a hotspot for smuggling art into Canada through the Yukon Trail.” Zeke

“Let me get this straight. You are all here working together recovering artifacts from a building full of books and yet you have absolutely no idea who I am?” Flynn

“You say a Guardian I’ve never heard of, three impossible Librarians, and Moriarty are all suffering under massive spell to erase the memories of you?” Jenkins

“You are one of the most grounded, genuine, real people I’ve ever known. Also the accent is a big turn on.” Eve

“You do know that actual FBI work is patient, detailed record keeping, and long boring stakeouts?” Flynn
“You’ve been watching too many cop shows mate.” Zeke

“Magic is just a word to describe the things we don’t understand, right?” Cassandra
“We do have a whole department of weird files at the Agency.” Zeke
“With all the myths and monsters out there, it would be ethnographically impossible to think that all those stories were made up.” Stone

“The truth is Eve you and I are colleagues. Moriarty is an evil genius, sent here by a wizard, who’s got you all under a powerful spell, and I’m here to rescue you.” Flynn

“Yep. Cuff time.” Eve
“You fit the profile mate. You’re an unconvincing liar and you’re the only outsider on the island.” Zeke

“Technically she is just bending space around her, otherwise she’s no faster than you and me. Elfin stuff.” Flynn

“No one is more focused than a Fictional. If it’s one thing they know how to do is tell a good story.” Ariel

“Together we will find these strangers and put them in jail where they belong.” Eve

“He’s with her. She’s with him. WHY ARE THEY WITH EACH OTHER?” Flynn

“Very unhappy to be here.” Ariel

“These native spells they can feel when you’re breaking them. They take steps to bring you back in.” Ariel

“Real love is hard. It’s risky. Sometimes it breaks your heart, but you have to take that chance, because that’s what’s real.” Eve

“And this, I don’t think it’s real and I’m not even sure you are.” Eve 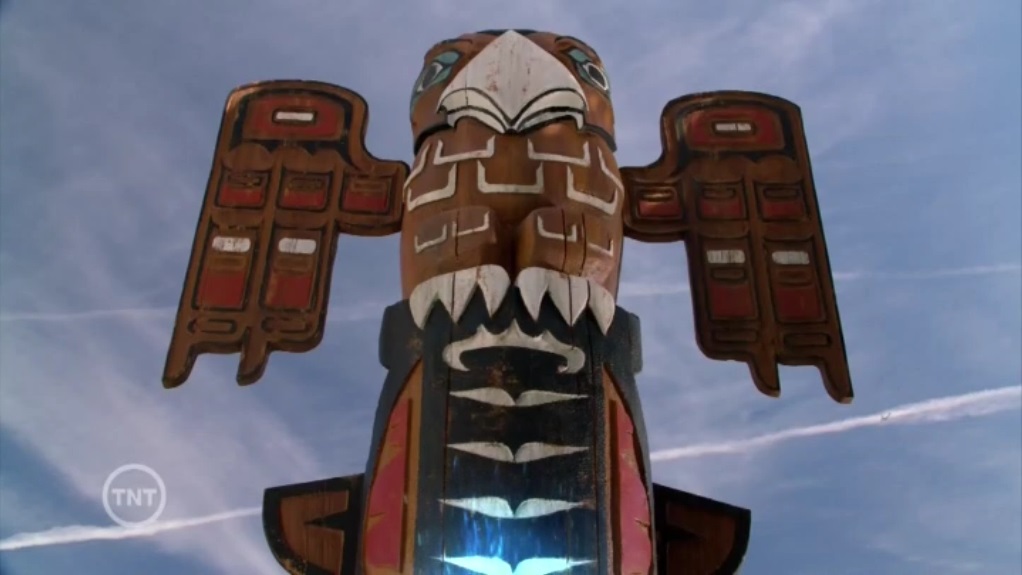 Remember to live tweet with the cast during the east and west coast airings, using #BecauseMagic and #TheLibrarians.