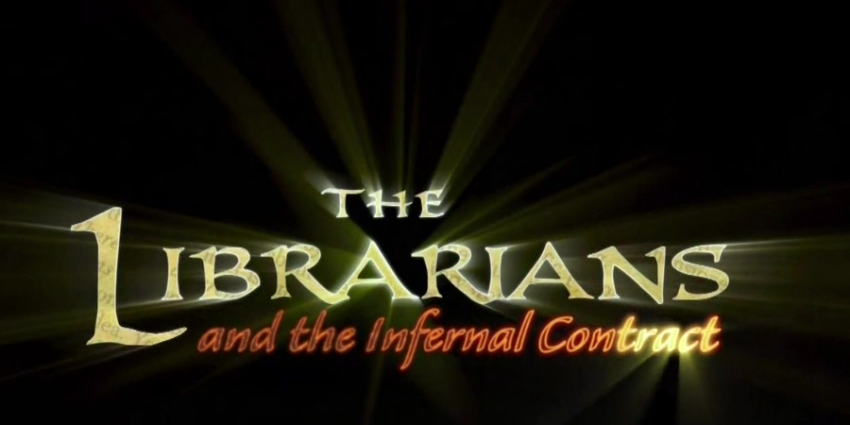 The Librarians Ep 2.06 – And The Infernal Contract Review

This episode of “The Librarians and The Infernal Contract”, has Eve taking a trip to see an old military friend who’s in trouble.  He’s running for office against a powerful old family, when his intern disappears. Unbeknownst to Eve, the Library clipping book sends the Librarians to the same small town to check out the case of a missing woman.  Of course, there’s more to her friend’s story.  The clipping book was right to send the trio, as a magic symbol is found where the young woman was last seen. It denotes the devil or rather a devil is at work. They are tracking down him and a centuries old contract.

Right out of the gate, I have to say, how wonderful it is to see Jonathan Frakes directing this episode, while at the same time, having John de Lancie playing the villain, Sesselman. For all the Star Trek: TNG fans, this is a major score. I may have squealed over this fact. If only, a little bit.

Eve’s friend, Sam, a mayoral candidate, is a bit too gung ho and overly sincere. His character is strong on the surface, yet is weak and thinly portrayed. His goodness lacks conviction. It’s no surprise that he gives in to Sesselman’s temptation to be a hero, and signs the contract.  His character is the low spot here. He is superfluous to the story and could have been written out, except to say, he is the lesson that anyone can succumb to temptation. He also falls short to what I believe would be an honorable friend of Eve’s.

With the previous episodes delving into individual characters, the opportunity is missed here to get to know Eve better through this long term relationship we are presented with.  For having history together, there doesn’t seem to have the expected spark of chemistry between them. The familiarity is forced. Again, it simply fell flat in this case. 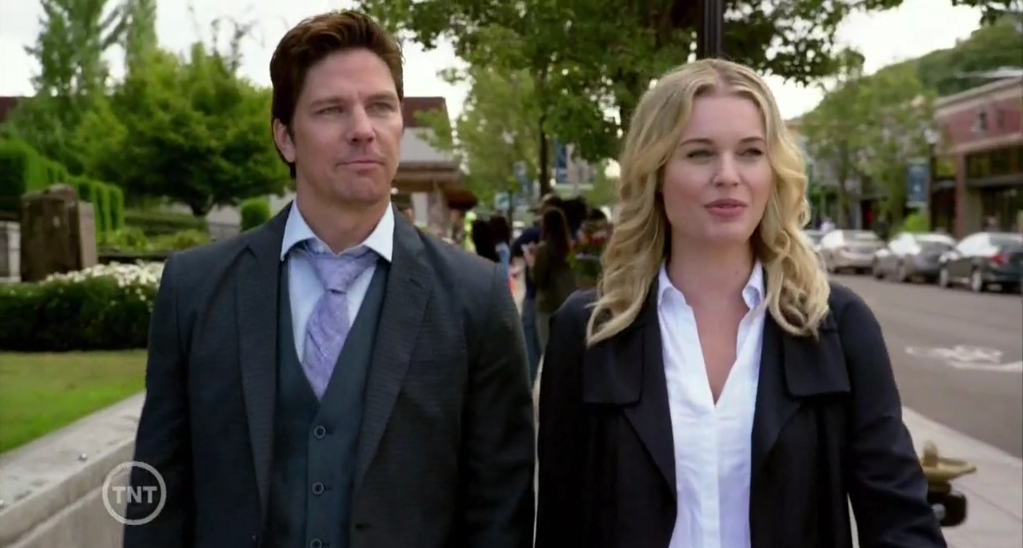 Thankfully, the rest of the episode hit the mark. John de Lancie is divine in his role as Sesselman. He knows how to capture a character and give it dimension. This devil, is likeable, clever, and charming. He preys on the wanting.  He deftly bedazzles and enthralls his victim. Sesselman is a wicked salesman, shilling his wares of temptation and promise. Do you think you could withstand his enticement? His interaction with Jenkins is gold.  Both immortal, both wordsmiths, and both difficult to shake up.

Jenkins is brilliant. He shines as well, leading the Librarian trio to the answers. The contract comes due every 44 years. The Keating Family signed a contact with the devil and the next contract is due now. He competently directs them to what they are up against.

I like the underlying theme, that it is dangerous to have access to magic in the world. Even tells her friend Sam how unsafe it is. That it’s like a nuclear weapon of sorts. Even Stone is leery of Zeke having a magical top to help him find the contract. “Wait you can find any valuable object with that thing?” The allure of it, is a temptation all the Librarians ae at risk for. This is why they have Eve to be their Guardian, as Jenkins pointed out in a prior episode. The road to hell is paved with good intentions, speaks loudly to this theme. Humans sometimes need protection in their humanness and are prone to stumbling. Those who understand it, know it well, are still at risk to fall for magic’s charms, no matter what the reason.

My favorite team up is Jenkins and Cassandra playing a May-December couple as part of the plan. Her bubbly high pitched voice when she says, “Whatever you say Big Daddy,” then giggles, is terrifically funny to watch.  Lindy Booth is proving week by week to be a versatile and comically strong actress. She is bringing out the layers of Cassandra. She has come a long way from the death fearing girl like self in the first season.  She and John Laroquette have an easy chemistry and play well off of each other. They appear to genuinely like each other.  She pulls “dumb gold digger off” without a hitch. Likewise, Jenkins pretends to be a snobby wealthy man, who likes arm candy. Though, it is refreshing when she comes back to normally brilliant self. 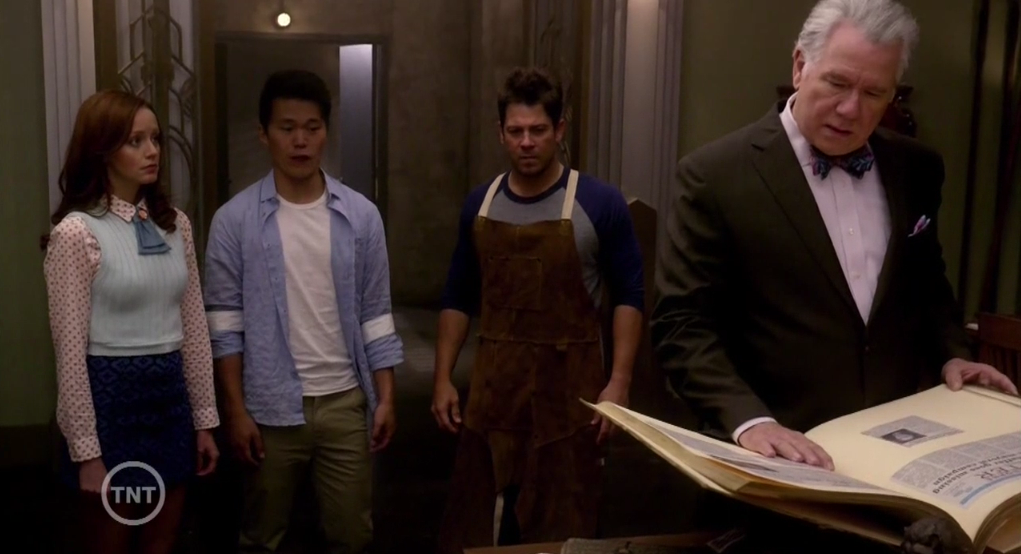 The use of the main plot carries through in some unexpected ways. The contract protects itself, so the trio finds themselves in unlucky situations, as Sesselman said would happen. Their misfortune plays out in a mildly slapstick manner. There’s over the top fighting, loads of running away, and physical comedy to be had.  Eve’s friend even punches her to get a hold of the contract. This is where it takes the expected turn for the worse.  Sam is too easy a target for the temptation. His continual questions about magic, made this too simple of a plot device. Eve should not be surprised. However, the use of natural gas not only nearly killing Stone, Cassandra, and Zeke, they’re humorously high in the process. Being trapped and near death puts another spin on the appeal of the contract.  Two of them are thinking about it, to save the three of them. No one is infallible. The contract, Sesselman feeds on the needs or desires of the would be signer.

Lastly, Eve saves the day very cleverly, after knocking Sam out with a punch in the face. That’s a good payback. It’s genius using Jenkins to go into the gas filled room to save the trio. He’s immortal remember and cannot be killed like they can. Sesselman’s reaction when she tricks him, thusly making him mortal and finding him in breach of contract, is wholly rewindable. A great save by team Librarians.

Though this is the weakest episode this season, it is still a good time, an A-.

Last, but not least, the quotes that made it witty, smart, and fun.

“Get ready for Chupacabra jerky.” Stone

“No, he’s making it. The Chupacabra is awesome.” Stone

“Uh. Ho. So glad you’re not the devil.” Cassandra

“You sound like a freaking theme park ride.” Sam

“The town of Hawthorne has something akin to a loose nuke.” Eve

“The glyph doesn’t mean the devil. It means a devil.” Jenkins

“Does it take human form or is it a weird ass monster?” Stone

“It will come dressed as anything you ever wished for.” Jenkins

“Colonel Baird sees the best in everybody. It’s a character flaw.” Zeke

“It’s druid. We got this.” Cassandra

“Power being the soul bound to the contract.” Jenkins

“You can use this stuff to steal.” Stone

“Ezekiel Jones doesn’t do easy; he does the impossible.” Zeke

“Whatever you say Big Daddy.” Cassandra

“I fought a tentacle monster. It’s a weird gig.” Eve

“Magic artifacts are like weapons of mass destruction, except every one’s different and the timer is always set at 45 seconds.” Eve

“Am I the only guy who sees that guy?” Stone

“Old man? You have no idea.” Jenkins

“Not my first rodeo, Sess.” Eve

“I wish you were a human being.” Eve

“What have you done to me?” Eve

“I don’t know. Exercise, eat right, look both ways before crossing the street, it’s all we have.” Eve