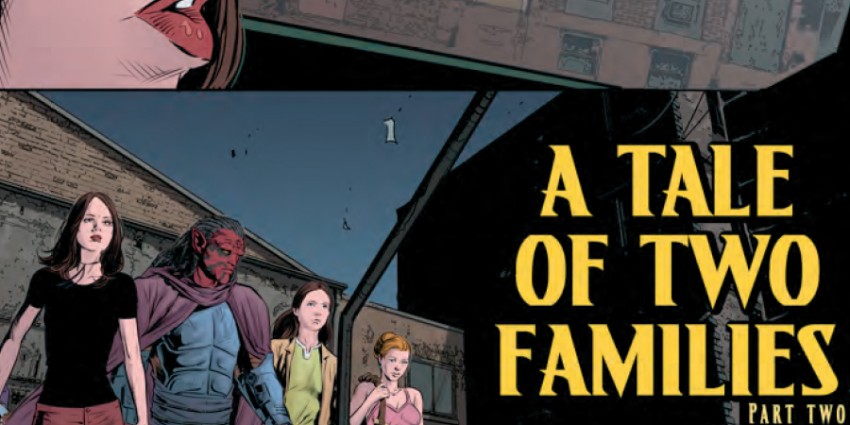 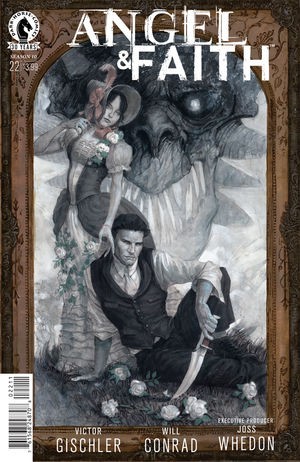 Angel has turned into Angelus…or has he? Faith is taking a royal beating from Drusilla’s goons…or is she? The newest issue of Angel and Faith is now out. This review contains spoiler

When we left Angel in the last issue, it seemed that Drusilla and Archeus had managed to turn him back into Angelus. There is much rejoicing from team Archeus, at least up til Angel tells them that Faith has got a big team consisting of an old one and a big old other dimension warrior and that Drusilla’s welcoming committee might not be enough. Archeus decides to send Drusilla to join her children and to himself talk Angelus into into convincing Naidra that she should help them with the magic town magic mojo that she seems to command. Angelus agrees but says that Nadira is more mates with the magic, it listens to her, rather than her being in charge of it. Archeus asks if they can perhaps convince her to call upon the magic and perhaps Archeus can get the magic to do his bidding. Anyhoo while the two of them chitchat, Drusilla is trying to take Faith down and it looks like she is about to succeed too!

Angelus has slipped into his Angel persona and is getting into the cell where Naidra is held. He is suggesting that maybe she could call upon the magic to help them out. Naidra says no, as this is want she figured Archeus wants, for them to call the magic so he can hijiackt it. Oh darn it thinks Archeus who has been lurking in the background. But before he has time to command Angelus to kill her, Angel who is indeed Angel punches Archeus and grabs the magic counciler friend and makes a run for it, but not before he has sent a text to someone.

Meanwhile Faith is on the ground being talked to by Drusilla. But when Drusilla is about to deal her final blow, or so she thinks, Faith receives Angels text, saying “I got her”. Faith then gets up pummels Drusilla, and Team Angel runs back home again.

Afterwards they contemplate that even though this was a win, it wasn’t really taking Archeus down…

This issue was enjoyable, if a bit predictable. My favourite part was when Archeus told Angel that the reason he nearly got beaten by the Scoobies in San Francisco was because they were working together as a family and this was what he wanted to build. Oh yes a bit soppy and of course old pointy face just wants his family so he can rule magic town and probably the world. But hey, it was nice because the scoobies have had their issues but they are strong together.
The issue ends with that statue again and it being delivered outside with people wondering what the heck is this?