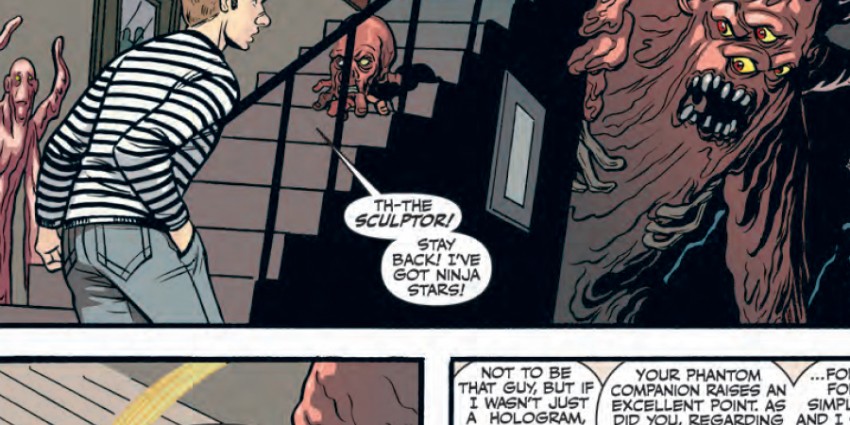 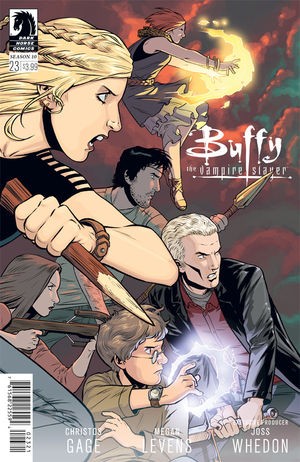 Can Andrew make a new body for Jonathan without selling out Buffy to the Sculptor. And how is Buffy getting on with working with the army? This review contains spoilers.

You know what, with all going on, I had totally forgotten about the book of Vampyr, that makes everything you write in it come true. Well in this issue it is brought up again as the magical council, the scoobies and the army is fighting no other beasty than Chutulu himself. They are struggling sending him back to his own world, and after the fight, the magical council suggests that actually couldn’t the write in some extra powers to its members while they are fighting all these sneaky monsters that keep on falling through portals to earth. Buffy is initially against it, but eventually gives in and takes the whole weird and wonderful gang home to her flat, where Dawn and her schoolmates is trying to study. Needless to say her friends get a bit weirded out. But said and done the magic counsils get some extra power’s that will help them fight the good fight. A Fairy also takes pity on Giles and offers him to come and stay in their world, they don’t care about appearances there and won’t treat him like a child. Buffy is a bit miffed about him leaving. She is also a bit miffed about Willow working with the army. Spike suggests some “sack time” and they head off to bed. The day after the decide to take the day off, but not being able to decide what to do, Buffy goes for a jog.

Meanwhile at Andrews place, non corporal Jonathan is complaining that he doesn’t have a body. Andrew is trying to explain that creating a new one isn’t exactly easy. As he says this, the Sculptor comes slithering in, telling them that actually it can be dead easy, in case Andrew does him a favor. This can of course never end well. A new body for Buffy’s Scythe, is what he wants. He will even throw in a fake one for Andrew to trade in. He tells him, that if he at any point Andrew would confess to Buffy what he had done, Jonathan’s body would be left to rot. After some encouragement from Jonathan, Andrew agrees, and heads to Buffy’s place as she goes out for that jog, and sneaks in to get it. He mumbles forgive me as he stands in front of the scythe in Buffy’s closet. Next we see him he is greeted by a far taller and handsomer Jonathan together with the Sculptor. As he hands the scythe over Buffy and co launch in and starts beating on the Sculptor. As Jonathan understands that this is it for his shiny new body, he rewards Andrew what a punch in the nose. To which Andrew says “this nose won’t go down well on grindr”. Jonathan run away.

Buffy manages to kill the Sculptor and the gang gathers around Andrew telling him he had done the right thing letting Buffy know. He is sad about Jonathan, but says he had to stop living in a fantasy world and start living in the real world.

This issue of Buffy got me thinking that I had forgotten about a lot of things, non corporal Jonathan, the Vampyr book that writes the truth and Ghost Anya, that isn’t even Anya. It feels like we need to get in on some explanation about the latter. Who is the ghost that hangs around with Xander, pretending to be his dead fiancee? And what about Giles running off to live with the Fae? Surely that can never end well? I guess we just gotta wait and see eh?