Outlander: Golden Globes, SoCal’s Great Day, and Oops, What Did He Say?

Exciting and disappointing at the same time… This past Sunday’s Golden Globes awards were, in many ways, a high point of the many accolades Outlander has received – and one of the low points as well. Nominated for three Golden Globes – Caitriona Balfe as lead actress in a TV drama, Tobias Menzies as supporting actor, and the show itself as Best Drama – we came away with no wins. But “it’s an honor just to be nominated,” we have to tell ourselves, and forever more, we can say “Golden Globes-nominated show…”

Below, I’ve got a first-hand account of the great day that the Southern California Outlander fan contingent had!

I don’t know if this is a slip of the tongue, but in this Access Hollywood video at about 2:45, Sam said that they’ll head back to begin filming Season 3! We have no official confirmation YET that Starz has picked the show up – but how could they not? With the huge list of awards – BAFTAs, 2 People’s Choice Awards, the GG nomination, and SO many more, plus the enormous, vocal, passionate fan base, there’s no way we’re not getting a Season 3. In my experience as a TV reviewer, I’ve seen showrunners and crew when they feel unsure about whether they’re about to be renewed, and I’ve seen them when they have every confidence – believe me, they behave very differently. And from what we’re hearing, if we read between the lines, they’re preparing for a third season. So watch this video and take it in that context.

I can’t get enough of these E! Online Glambot tweets of both Sam and Caitriona! They both looked stunning, and Sam was named one of the 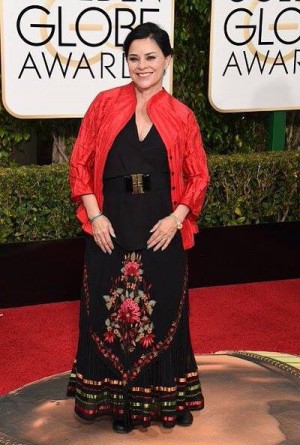 best-dressed men at the GGs by GQ Magazine. Caitriona made some of the best-dressed lists as well – as rightly she should! And Tobias was very handsome. And let’s not forget Ron Moore, Maril Davis, and of course, DIANA! Her dress looked amazing. (Diana’s birthday was yesterday, and today she went in for some minor foot surgery – what a weekend!)

The fans from the Outlander SoCal Edition Group had a great day at the Golden Globes! The photos below were taken from the fan bleachers by Maeline Younger (used with permission). 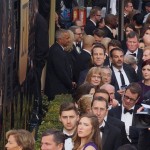 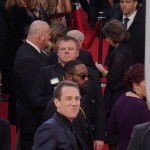 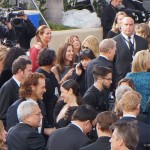 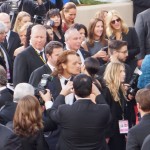 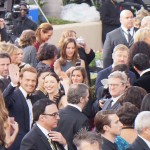 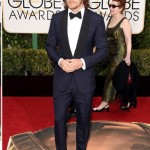 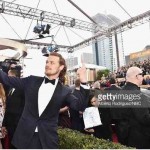 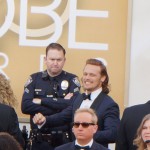 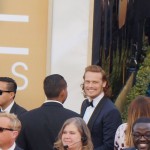 Elise Wolfe-Donato, one of the participants, gave me this first-hand account:

The original plan was to have Outlander fans stationed at a strategic Beverly Hills intersection and cheer the GG-bound limousines of Ron, Diana, et al., as they headed to the Beverly Hilton. However, late last week, one of the heads of Outlander SoCal Edition – our intrepid Leona Barad (who has “industry connections”) – arranged for Outlander fans to sit in the red carpet bleachers.

At 9:30 a.m. on Sunday, 40 tartan-clad Outlander fans (along with a wide variety of GG workers, hotel employees, and other privileged spectators) descended upon a designated parking garage to await shuttles. The Outlander group spent the next 90 minutes in line, chatting with old friends, meeting new friends, and making wild speculations about what the day would bring.

At 11:00 a.m., the Outlander fans slowly worked their way through a security checkpoint, boarded buses, arrived at the Beverly Hilton, and followed unsmiling escorts to the designated bleachers. We (along with our three big signs) occupied almost half of the bleachers.

10:58AM: After settling in our seats and thawing out in unexpected intermittent sunshine, we had a chance to drink in our impressive surroundings: big gold signs, gold bedecked booths for media outlets (e.g., NBC, E!), the massive red carpet, a supersized jib, numerous headphone-adorned workers, and, occasionally, gorgeous young women in formal gowns. Then, reality struck: we were here, and perhaps we could make a major public statement in support of all things Outlander.

While waiting for the red carpet session to begin, we practiced chanting “OUT-LAN-DER” and “TU-LACH ARD.” Leona Barad developed a signal for alerting us that an Outlander VIP had arrived and that we should commence chanting. We made some initial social media posts with hashtags #KiltedGlobes and #OutlanderForTheWin. We sipped ice cold Fiji water provided by GG. We snacked on Anne Epstein’s homemade cookies; in a nod to Season 2, she laced them with St. Germane liqueur.

As 2:00 approached, we saw more red carpet activity, mostly involving people garbed in formal attire. We began scrutinizing each passerby. Someone recognized Sony publicist Robyn Harney; we called out to her. Heather Insley literally shouted out to Matt Lauer. Some of us watched Twitter and Facebook, in an effort to determine to learn the latest news.

The red carpet event officially commenced. Celebrity arrivals began slowly. (These people all look so beautiful, it’s hard to believe they’re real.) We recognized only a few of the people emerging from the limousines. We called out to celebrities we knew, and they graciously waved back. Some made a humorous point of taking pictures of us in the exact manner that we took pictures of them. Such good sports!

Like hawks, we carefully watched each limo door open. “Is it Ron?” “Someone said Diana is wearing a pink (?) jacket!” (It was bright red.)

Some of us monitored Twitter with the hope of learning when the Outlander VIPs might arrive. “Sam tweeted he’s fighting a fever! Maybe he’ll be late.” 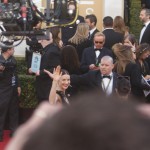 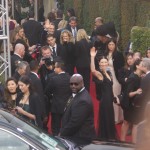 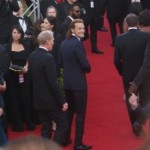 At about 2:20 p.m.: “Hey, Maril says she’s on her way, with Ron and Diana!” Moments later: “They’re here!” They looked wonderful. I missed Leona’s signal, but we began chanting. Loud. Deafening. Ron pointed at us. We went nuts! We kept chanting. Ron smiled. (“He must think we’re idiots!”) Diana smirked. (“She knows we’re idiots.”) We quieted down as Ron, Diana, and Maril wound their way through the red carpet path. But, they soon worked their back toward us, and we chanted again. (“Are they thinking, ‘Enough already?'”)

As time progressed, the limousines began arriving by the dozens. It was hard to see each arrival, because many occurred simultaneously. At one point, I realized my beloved Eddie Redmayne was holding forth with reporters. (“When did he get here? How did he get here?”)

Occasionally, an A-lister (e.g., Rob Lowe) approached the bleachers. We fans responded with glee. So down-to-earth.

We periodically cheered non-Outlander celebrities. We were SOOOO loud. (“Are they going to kick us out?”)

“Hey, some news outlet is reporting that there’s a super-vocal Outlander contingent at the Globes!” “We were on TV! My sister just texted me a screenshot!”

At 3:00-ish: “Caitriona tweeted she’s en route!” We began watching the limos with intensified vigor. I was getting whiplash from snapping my neck back and forth, trying to keep an eye on all the arrivals.

3:15-ish: I looked down at my backpack. trying to get my phone charger. “He’s here!” The thunderous chanting began. I looked up. I missed Sam emerging from his limo. But, I saw Cait emerge from hers. Tobias arrived in a third vehicle. None of them approached the bleachers. But they knew we were there. They pointed and waved. They repeatedly looked over at us. They were all smiles. They looked amazing.

The chanting faded as they began to move through the red carpet maze. As Sam again headed toward the bleachers, we chanted again. There’s no way Sam could possibly ignore us. It would have been embarrassing for him to NOT acknowledge his fans’ ongoing, ear-splitting, quintessentially enthusiastic chanting. He smiled. He mugged. He waved. He gave his signature thumbs-up sign. He took a selfie, with us in the background. He moved on, to the interview area. (“He’s wishing we’d stop, already. He must think we’re nuts.”) 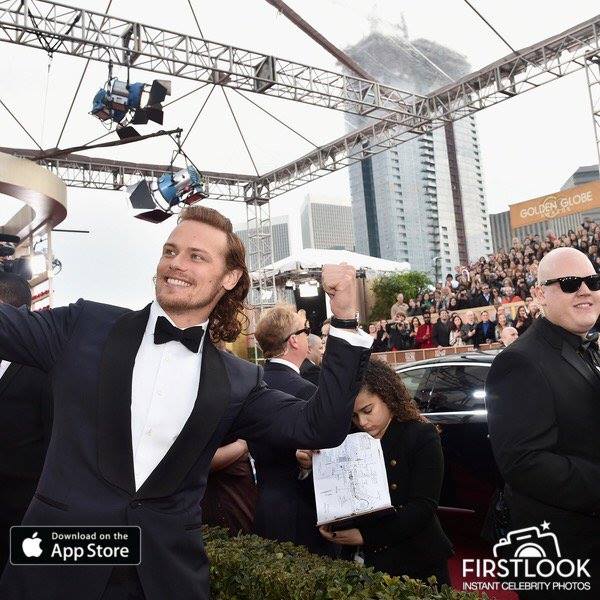 The red carpet interview area was a sea of densely-packed people. It was hard to keep a bead on someone in that mass of humanity. For a short time, we could see Sam and Tobias together, or Sam and Cait together. We then lost track of them.

For us, the highlight of the afternoon had come and gone. But, we had another hour of bleacher time to go. We continued to enjoy the never-ending stream of celebrity arrivals. Highlights included the Monroe-esque LadyGaga, who made an overt effort to appreciate our cheers, and Gerard Butler, who reveled in our “HOT SCOT” chant.

As 5:00 neared, the arrivals dwindled. We all checked news reports and social media banter. “Hey! This reporter says we were the most vocal fan group in the history of the Globes!” I can’t vouch for the veracity of that assertion, but I can say this: I heard no other fan groups at this red carpet event. None. So, if nothing else, we fans managed to distinguish Outlander by its fans’ ability and willingness to get into this event, and show unabashed “consumer” support for this unique “product.” There must be 50 ways to provoke interest in a TV show; surely, SoCal Edition’s GG antics is one of those ways.

5:00 p.m.: The red carpet event officially concluded. The celebs swiftly disappeared into the hotel. The unsmiling GG personnel rushed us out of the bleachers and toward the shuttles. We weren’t even permitted to get selfies with the big GG sign in the background.

As we stood in the shuttle line, GG staff worked at breakneck speed in dismantling the red carpet area. A fascinating spectacle.

Upon returning to the parking garage, about 25 SoCal Edition fans went to the Century City BJ’s for dinner and to watch the award show. I couldn’t join them. I had to head home, to help my daughter with her science fair project.

Later that evening, I saw the disappointing social media posts: Outlander was “0 for 3.” But, as said by so many others, it was a victory to be considered and to be nominated. And, the experience was fabulous: being next to the red carpet at a high profile, televised, A-list industry event … hangin’ with the warm, friendly Outlander homies … seeing Sam, Cait, Tobias, Ron, Diana, and Maril “in the flesh” … doing something significant and palpable to promote “our” show … wow! I’m looking forward to doing it again next year!

Note to file: for as fantastic as our Outlander peeps look in photos, they’re even better looking in person. How do they do that?!

Thanks, Elisa, and all you fantastic SoCal gals! Now on to the next awards —