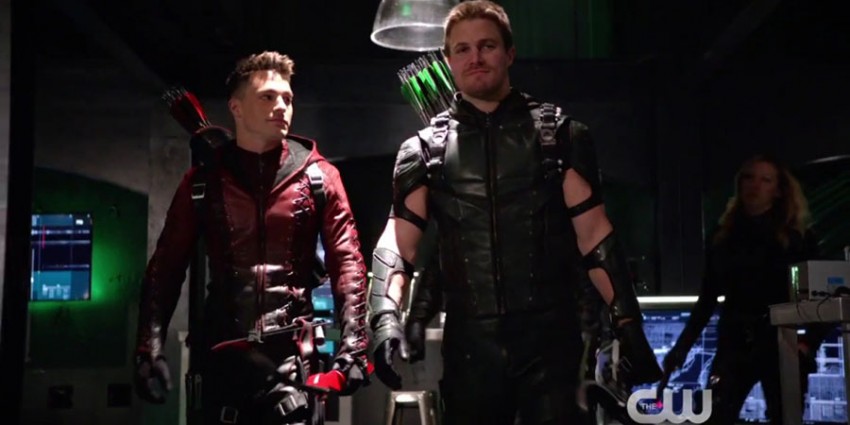 Arrow 412 Review – Many Choices and Familiar Faces in “Unchained”

Guess who’s back! This week’s Arrow episode featured the appearance of a lot of familiar faces, plus a brand new one. However, the new one is a villainous hacker who calls himself “The Calculator.” His plan is not just to bring down the Internet (although that would be apocalyptic in itself), but to bring down all of Star City. Between the new cyberthreat, Thea’s declining health, and the return of Roy, Nyssa, Tatsu, and even Shado, we have plenty to discuss. So let’s fire up the modem and connect to . . .

This episode revolved around one big idea: choice. Choices define who a person is and that came into play many times throughout “Unchained.” From Thea to Roy to Felicity to even Oliver, a lot of Team Arrow had to face important choices and deal with the repercussions of their decisions—for better or worse. The episode did a great job showcasing these choices and how they affected not only the individual, but also the team. 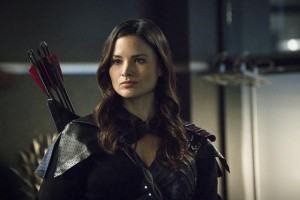 We’ll start with Nyssa, since she was the first person we saw get into some action. First of all, the knife in that pepper was awesome, as was every fight Nyssa engaged in throughout this episode. Her choices were pretty straightforward: I’m breaking free, I’m getting The Lotus, I’m orchestrating Merlyn’s death. The repercussions of her choices haven’t really play out yet, but regardless, I think every choice of hers is a reflection of her badass and determined self. You go, Nyssa!

Next up is Roy, who returns Star City after his self-imposed exile because he’s being blackmailed. Thanks to quick thinking by Felicity, the team manages to get him to safety under the guise of yet another fake death (soon he’ll have enough for a free sub!). Seeing him back in his red suit and in the thick of things with Team Arrow again was very fun to watch. But his scenes with Thea were the most memorable, and they helped bring bittersweet romance between them to a more satisfying end. 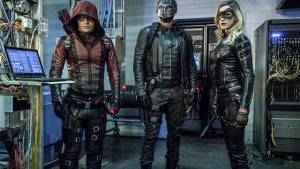 Roy had two big choices: One, to risk his life in that explosion and two, to let Thea go. As sad as it is, he ends up choosing to listen to Thea and go off to live his life—a normal life, even—without her. Part of Roy being in love with Thea means respecting her wants. And what Thea wants is to die for her values of not being a killer anymore. It’s noble and heartbreaking, and that certainly makes for good television.

As for Felicity, we got to see new character development in her as a wheelchair-bound badass. Part of that development came from Curtis, who was back in this episode to share some quality scenes with his boss (and briefly with Roy). Felicity and Curtis have a wonderful working relationship that got to shine this week. He reminded Felicity that she is a force of nature and that she shouldn’t let a wheelchair hold her back. So, she too had to make a choice, and she chose to do her big presentation, despite her circumstance. 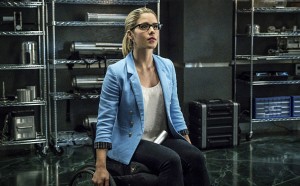 And then of course we have Oliver, Mr. Guilt Arrow himself (love the new nickname). His choice was twofold, and part of it hasn’t been resolved. It had everything to do with Thea and her “reverse bloodlust.” Because she refuses to kill anyone—her choice—the Pit is taking its payment from her own body, slowly killing her. Oliver, of course, wants to save her, but also wants to respect his sister’s decision. But at the end, when he’s faced with the chance to get The Lotus, he must make another choice. Which leads me to . . .

Malcolm Merlyn! He was in this episode as well, looking great as usual, and also faced the choice of letting Thea die. But it seems he doesn’t know about The Lotus, or that would have been his go-to plan. The scenes with Malcolm, Oliver, were heart-wrenching, and Malcolm playing the actually supportive father made his past misdeeds almost forgettable. 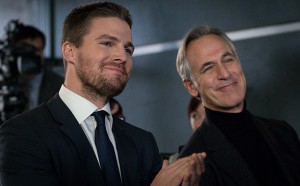 Oh, Oliver, if you only knew who he is… [Source: The CW Network]

With all these choices to talk about, I nearly forgot about our villain! The Calculator and Felicity went head-to-head via hacking and had a few pretty memorable moments—namely, Felicity being sassy toward a cyber-criminal who also happens to be her dad. Oh, yeah, that was revealed too. Seeing him sitting in on her big presentation was quite the shock, but a great way to get him back into Felicity’s public life. He’s a formidable villain in that he operates behind a screen, making him difficult to find and difficult to stop. But Felicity and the team manage to stop him (though not for good if his sudden appearance at Palmer Tech is any indication). He’ll no doubt try to persuade Felicity to his side , but time will tell if he finds out she’s Overwatch.

I should also briefly mention Damien Darhk’s wife, if for no other reason than to speculate on her choice to run as Oliver’s competition for mayor. What could she be thinking? Take control of the city and use her power to eliminate the Green Arrow? Or something much more complicated and shady than that? Most likely it has something to do with Darhk’s own plan for Star City, and it will no doubt cause many problems for Oliver and Co as episodes progress.

And last, but not least (this time), we saw more flashbacks. After a shocking torture scene, Past-Oliver gets a blast from his past when Shado suddenly appears. But she’s not real, just a figment of Oliver’s mind. Hmm, where have we seen that before? She acts as a guiding force for him, and it was really fun to have her back (if only as a hallucination). 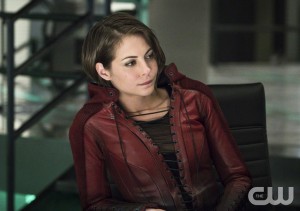 Surprise twist! This picture of Thea is from last week’s episode. [Source: The CW Network]

The MacGuffin! Err, The Lotus. It’s pretty typical in Arrow to have some borderline magical item that will fix the characters’ problems. This time was no exception when Nyssa showed up to tell Oliver that she has exactly what will save his sister . . . but at a price. Although this is not a new tactic, it is causing me to reach a point of exhaustion about it. A magic flower to cure the magic bloodlust caused by a magic hot tub? Yeah, the suspension of disbelief is getting tough to hold onto. Plus, this is all really repetitive from last’s year “save Thea” plotline.

Along a similar vein, the repetition of Oliver’s blame game was also tiresome. Although that is a part of his characterization, you’d think after years of his team telling him to stop blaming himself for everything, Oliver would get the message. But no, it’s still not sinking in, so we get to watch current day and past plotlines about it. 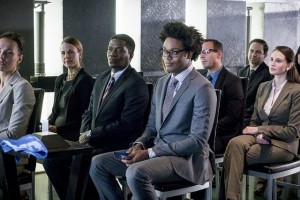 Curtis was back and in style! [Source: The CW Network]

I give this episode 9 out of 10. It was a great episode overall, but those repetitive qualities undercut the overall enjoyment of the episode. Nonetheless, I really enjoyed the introduction of The Calculator/Felicity’s Dad, as well as all of the returning characters that keep popping in and out of the show. Seriously, there are so many characters that make a shocking return after being gone and/or dead. It’s another one of those Arrow go-to techniques. But it’s mostly been fun, so I can’t complain (too much).

What about you? Have a thought about this episode or Arrow’s show tactics? Comment down below, and be sure to enjoy these quotes from “Unchained.”

Felicity: “Who’s shocking return can we look forward to next?”

Thea: “You know what you could do for me? Go live an amazing life. Get married, have a couple kids, get a minivan. Just go be normal. There’s nothing in this world that would make me happier than that.”
Roy: “You know, if I could do all of this over again, I would do every single one of those things with you.”
Thea: “Me too.”
Roy: “I love you, Thea Queen.”
Thea: “I love you, Roy Harper.”

Curtis: “There are two Felicitys, Felicity. The one in that board room whose wheelchair makes her doubt herself. And this Felicity. Brilliant force of nature. This company needs the second Felicity.” 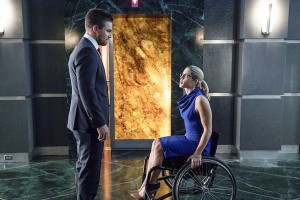 The trust between them is powerful. When Felicity says, “Shoot!” Oliver says, “Yes, ma’am!” [Source: The CW Network]

Felicity: “My pride that you understood what I was saying is slightly undercut by your lack of faith in me.”
Oliver: “I have nothing but faith in you . . . just do it.”
Felicity: “Already did.”

The Calculator to Felicity: “I almost feel bad about beating you. I rarely get to meet someone with your talents.”

Felicity: “How it is that you [Oliver] always manage to blame yourself for everything?”
Diggle: “That’s his superpower. ‘Guilt’ Arrow.”

Felicity to The Calculator: “Boom! I believe the technical term is ‘I pwned you!’”

Nyssa: “I have come for The Lotus.”
Tatsu: “It is my responsibility to keep it safe.”
Nyssa: “I know.”
Tatsu: “Unfortunate.”

Nyssa: “My father once told me of an elixir known as The Lotus, capable of countering the effects of the Lazarus Pit. A secret weapon developed by the League’s enemies.
Oliver: “Do you have it?”
Nyssa: “I do. And I will freely give it to you on one condition. I want you to kill Malcolm Merlyn.”