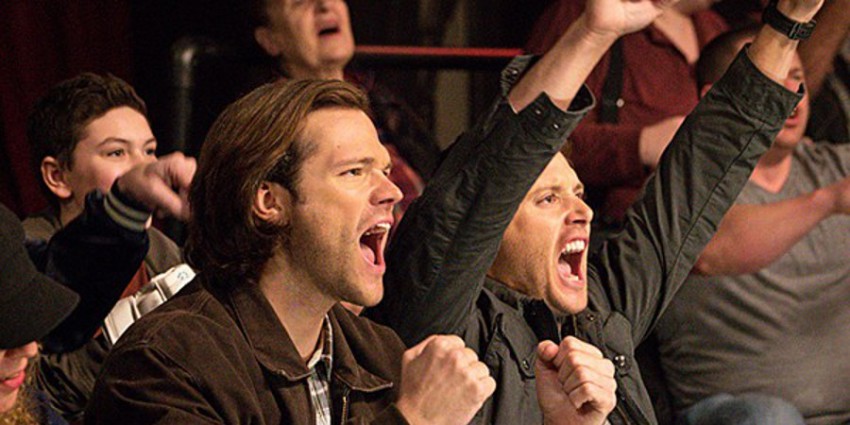 Supernatural: 1115 Review “Beyond The Mat”

By: Diane Selburg
review Supernatural on The CW The CW

Leave it to Dean to be super excited about seeing his favorite wrestlers in person in this episode entitled Beyond The Mat, and it was a brilliant fan-boy moment. I wonder how I would react seeing some of my favorite actors or musicians. Honestly, I don’t know if I can accurately answer that question, however, in person I would probably get tongue-tied.

I love Supernatural, the show holds a special place in my heart, and I could never say that it fails to entertain. However, with that being said, there are times that we get, what I like to call a “filler” episode. A filler episode is one in which we see a highly entertaining, insanely funny episode that seems out-of-place with the rest of the season. It exists simply just to fill the void until we get to the really juice episodes. Beyond The Mat was the classic definition of a filler episode, with only the minimum thrown around about the very real problems of Lucifer and Amara.

How many times can we see some dumb on his luck smuck sell his soul, for a dream job, award etc; and still find it entertaining? The answer is slim to none, in fact it’s an absolute bore and I couldn’t be bothered to pay much attention. It seems as if hell has went to hell in a hand-basket, what with Casifer on a mission to find more “hands of God” and Crowley in the doghouse, no one is keeping a watchful eye on what the soul characters on earth are doing.

I never thought that I would ever feel sorry for Crowley ever but the past two weeks have done a number on my psyche. Crowley may be a demon, and one whose arse you would like to kick, but he is no dog. No man, woman, or fictional demon should be treated like a dog, licking crap off the floor. No, just no! I was glad he got away, and now he needs to hightail it to Dean and Sam ASAP!

Speaking of Sam and Dean, Dean was not the only Winchester to have a fan-boy moment, because Sam was eyeing that wrestling promoter. I bet you dollars to donuts that he did have her poster on the walls of whatever hotel room they called home that week! I was laughing throughout the parts where they were having their fan-boy moments. It is stuff like this in a “filler” episode that makes the show great, it is still highly entertaining and it gives the boys a semi-break from “saving people and hunting things”. Jared and Jensen are always great in every episode, but they always shine in these kinds of episodes.

I had a bit of a fan-girl moment myself, when I saw “The Miz” so much that one of my first tweets was just that! There was a time when I used to watch The Real World on MTV, and Mike I believe gave himself that wrestling name on the show, and for some reason it stuck with me. His character or real life persona (one that he wanted us to see perhaps) was such that you either loved him, or hated him, or you didn’t know whether to love or hate him. It was just the slightest bit of a fan-girl moment, and it was due to nostalgia from when The Real World was good! I am glad his dream of becoming a wrestler came true!

My favorite scene in this episode was when Dean climbed into the wrestling arena, and was having a blast pretending that he was in a wrestling match! It’s no secret that we all have something that we wish we could do, and we would act the same way. I would have to think on what I would like to do before I settle on any one thing. I find most “filler” episodes that occur on this show to be highly entertaining, and it gives the fans as well a bit of a break from all the serious stuff that a hunter’s life brings to the table.

What do you think of this “filler” episodes? Yay or Nay? Did you love or hate it?