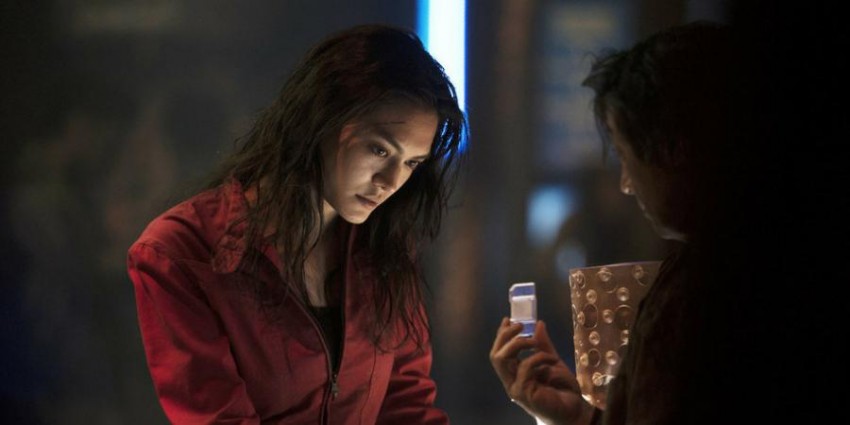 The Expanse has definitely been one of the best new shows I have watched in quite a long time. I cannot believe that I just finished watching the season finale, and I was on the edge of my seat for two hours! It was one hell of a finale, and  I am really going to miss the hell out of this show. It was fun tweeting with the fans, writers, cast, and crew! I digress, as per usual, so now on to my thoughts about the season finale.

We finally learned what happened to Julie Mao, in a series of flashbacks that were done really well. I thought the flashback scenes served as a recap, by showing what Miller had pieced together with what happened seven weeks earlier. It was clear to this viewer that this was a very well thought out plan, and it was executed to perfection from the jump. We have the bogus distress call that was made by the crew of Anubis, knowing that the Canterbury would take the bait, and come to the aid of the Scopuli, They knew that the OPA members would be trying to intercept the Anubis, because they knew that some kind of weapon was on board. I bet we have our little canary, Kenzo to thank for that, because he is quite the little freelance spy.

Florence Faivre rocked all her scenes out, and I could feel the sadness through my television screen. It was more than sadness, it was despair, confusion, anger, grief, and so much agony. You could hear so many emotions in her voice during the flashback scenes, and it made for some very powerful moments.Dawes was someone she respected, and trusted beyond all doubt, and he left her there to rot (literally). She thought sure that he would either be waiting for her at Eros station, or that he would soon show up. Dawes, you turned out to be a real piece of work. 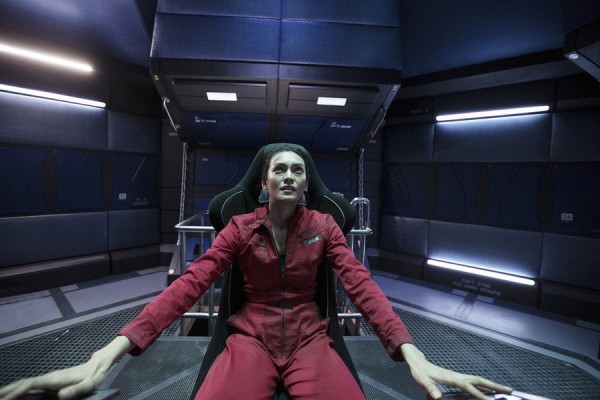 I have not read the book series as I am sure you know by now, and I am surprised I wasn’t more upset by her death, but it was to be expected. She had been majorly exposed to the blue spark of death (or protomolecule if you prefer) quite a bit, but it was still a hard pill to swallow. We were just hoping that she was alive and well. I almost felt bad for her father when he learned that she had died as a result of their little experiment, almost. I never once thought that he was the mastermind behind all that went on over the course of seven weeks. I thought everyone from Johnson to the Mormons even, but never once did her own father cross my mind. Dresden and Jules-Pierre Mao are the lowest scum of the earth, or better yet, the ass-crack of the solar system.

I was able to obtain a viable sample of the protomolecule. The injections have been prepared. We are ready for lock down. The radiation units are in place. We can still do what needs to be done. We may not get another chance. We’ve come so far since that incredible revelation on Phoebe. -Dresden

How creepy was Dresden, with his talk of how she will make her father proud, and save a lot of people speech? He just infected a bunch of people who lived on Eros with this protomolecule, and then gave them radiation. As a non-book reader, I could only think that the protomolecule reacted to power, and chemicals in order to grow at a rapid rate. The poor people of Eros were just being used as lab rats, and it was not until the very last second that I realized we were dealing with something bigger, but more on that later. I loved how everything had finally come full circle,from what we saw in the very beginning of the series to the finale. It was all very smooth, and it was tied up with a neat little bow.

Avasarala is one tough cookie, and one could say that she is as cold-hearted as they come, she really had some nerves of steel to go visit Degraaf’s home, after betraying his confidence the way that she did. She has proven that she will do whatever it takes to learn the truth about any situation she runs into. She will continue to play the role she has been given, but no one should underestimate her abilities to get at the truth, nor forget how smart she is. I am really looking forward to more from her in season two. 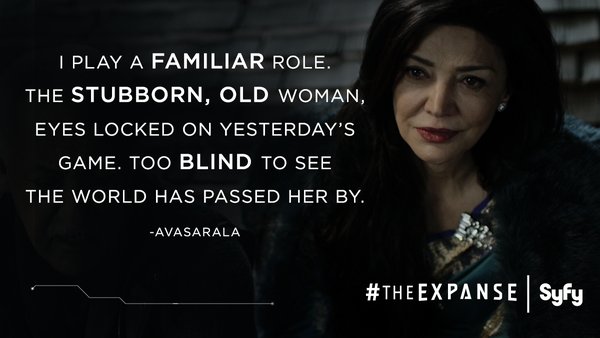 I will have to take back anything negative I said against Fred Johnson in my previous posts,because it became quite clear that he was not behind all that has happened. Of course, with his history of being the Butcher of Anderson station, he would be the first one folks would blame, but he had proof on his side. Despite broadcasting that the ships where built by Earth, he is still getting the blame. Chad Coleman was brilliant while giving his speech, and it is so nice to see him on my TV screen once again.

It was hard to look at this season finale as two episodes, because they blended so well together. It was nice to find out that my thoughts of Naomi either being a current or former member of the OPA was spot on, or could there be more to the story than that?  If she wasn’t a member, then there must be another reason that she knew all about the tunnels that the OPA used at different stations around the solar system. Did anyone notice that no one really questioned her about it either? I like that both Alex, and Amos still trusted her, without having any doubts whatsoever!

I think my favorite scenes were the ones with Miller and Holden, and sometimes I wish I had been on hand to smack them both at times. As I said, in my last review, I was looking forward to the meeting between these two characters, and I was not disappointed at all. Thomas Jane, and Steven Strait play off each other well, and they were both brilliant in this finale. Holden and Miller are really only looking for one thing, the truth, and sometimes that truth will only lead to more questions. In this case, it lead to pain as well, because Holden just had to know what was behind those doors, and it led to them both receiving a high dose of radiation. I remember thinking “No, don’t open the door, this is just going to end badly for you”!

I I loved the little run in Holden had with Kenzo, and thought it was pretty funny that he acted as if they were pals or something. Really, Kenzo how did you think Holden was going to react to you? You were lucky that he didn’t shoot to kill on sight, but I guess you could say that karma got you in the end. After a major shoot out, and a mad dash to the finish line that is the docks where the Roci is parked,Miller and Holden take a breather, and have a bit of a chat.

I hope that Miller and Holden will be really good friends after all this, and he will become a crew member of the Roci.I love that our good guys were able to get a lock on the bad scientists, and they appeared to be going after them. It is a long wait until 2017 so I think now would be a good time for me to pick up the books in the series, and have a nice binge read. Until then I am left with the image of Kenzo receiving that good old karma I spoke of earlier, though I am not sure he deserved that to happen. It looked to me as if he had been cloned or replicated somehow, and that was so much more than a bio-weapon. Now I am wondering if Julie is not truly dead!

Yes, I must get the books, because I just have to know now! What did you think of the season finale of The Expanse?  Are you planning on reading the book series now too? Sound off below!