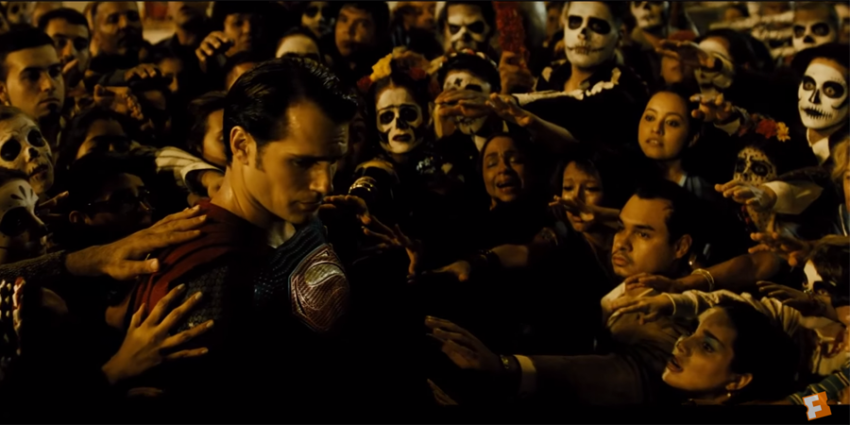 Batman vs Superman: Dawn of Justice – Review – Don’t Believe Everything you Read

One of the rules I try to follow when I’m going to watch a movie for review here is, I avoid other reviews of it, simply because they can skew your opinion of a movie before you see it. As I’ve said before, ultimately you have to watch the movie yourself and make up your own mind.

Unfortunately, that wasn’t really possible with Batman v Superman: Dawn of Justice. I float around on the same Internets as you do, Reader, and so I couldn’t not see that everyone and their Twitter feed seems to agree that BvS is the worst comic book movie since Halle Berry stunk up the joint in Catwoman.

Well, I went to see the movie for myself today, and either I’m an idiot, or everyone and their Twitter feed is wrong. I’m probably an idiot. But this won’t be the first time I’ve stood apart from the masses, and it likely won’t be the last. Batman v Superman: Dawn of Justice is not nearly as bad as you’ve been led to believe.

I say this primarily because I’m a die-hard fan of Zack Snyder’s work; I have been ever since his 2004 remake of George Romero’s Dawn of the Dead. Yes, I even liked Sucker Punch, and I wear the label of Irredeemable Weirdo proudly. But there is method to my madness: under all the summer movie flash and noise that a Zack Snyder movie typically brings, there is a message, or more specifically, a finger pointing to an elephant in the room that we really need to discuss. In the case of BvS, that elephant is a question: “What does ‘god’ — that is, the concept of a higher power or a force greater than yourself — mean to you?”

The story opens as Man of Steel‘s climactic slugfest between Superman and General Zod rages in the sky above Gotham City. Predictably this clash of titans is reducing the city to rubble, which brings with it the inevitable human cost. Bruce Wayne (Ben Affleck, who should own the rights to play this character like Hugh Jackman owns Wolverine) witnesses this cost first hand, as the Wayne Enterprises building is brought down in the chaos, injuring and killing many Wayne Enterprises employees. And so Bruce Wayne’s mind is made up on the question of whether the world might be worse off with Superman in it. 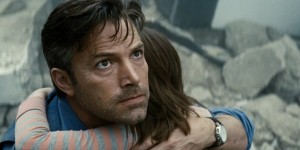 “Pretty sure I hate that guy now.”

Two years pass. Others have come to a similar conclusion as Gotham’s resident billionaire playboy, among them various Washington power brokers, and Lex Luthor (Jesse Eisenberg, reprising his stock Smartest-Guy-in-the-Room character, of which I still haven’t grown weary). Luthor has been devoting his vast scientific resources as head of LexCorp to developing a deterrent to be used in the event that Superman decides to start punching far below his weight. But others see Superman as a savior, even a god, and so the theme of the movie, what does ‘god’ mean to you, is brought into play.

There’s really nothing more I can say about the movie itself that hasn’t been said elsewhere. Wonder Woman is in it, and like Watchmen‘s Silk Spectre before her, Snyder uses the character to remind us once again that a strong woman can be so without being angry and hostile. 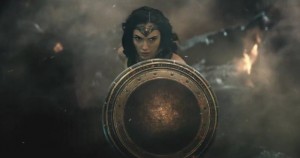 She’s too busy being a badass.

Doomsday is in it, and this is the one place I’m forced to agree with other reviews I’ve read: he does start off looking like a cave troll from Lord of the Rings. But fear not, purists, the bony growths put in an appearance in short order. And yes, the Caped Crusader and the Man of Steel do, in fact, throw down, but it doesn’t happen for over an hour, so you’ll be very bored if that’s all you’re waiting to see. The resolution of that particular conflict isn’t as stupid as I was led to believe, though; it actually makes a kind basic sense, and taken together with other facts that come to light at the same time, it’s right that the fight should end on that note.

As with Zack Snyder’s other work, the message he’s trying to convey is the thing, so I’ll break from the pack and talk about that. What does ‘god’ mean to you? Do you even acknowledge the concept? To the people of Metropolis and Gotham, Superman is a god, for better or worse. Some think he should be (or should have been) their safety net, always there to catch them, making sure nothing bad ever happens to them. Some see him as an unchecked force, to be harnessed and bent to the will of humanity. And to others he is simply a manifestation of the fact that there are things in life that we cannot control, and they chafe at such a constant, tangible reminder of this unpleasant truth. 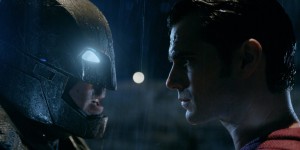 The side that Snyder seems to be coming down on with this story is that god (again, be that Jehovah, Allah, Zenu or just the Higher Power of Alcoholics Anonymous fame), is none of these things. Instead, god is that symbol that speaks to the best in us, and challenges us to be greater than we are. Humans are autonomous beings, with all the glorious, terrible freedom to craft our own destinies that implies. God, then, should be the thing we use to remind ourselves that we can be more than brute animals.

It’s unfortunate that so many people who will go to see this movie over this opening weekend and in the weeks to come will miss this message, but Zack Snyder has never been heavy-handed when it comes to pointing out what he’s trying to say in a given project, and chooses instead to leave it as a discovery for the audience to make on their own. This is why I respect his work, not only because he’s a phenomenal filmmaker in general. The current attitude of the average movie-goer is to only watch a movie out of the corner of one eye because we’re too busy texting on our cellphones about how terrible the movie we’re watching is, and aren’t we so much smarter than all these other sheeple for noticing that? Snyder’s is the perfect response to this. Yes, a Zack Snyder movie brings the big, screamy “THIS IS SPARTAAAAAA!” noise and popcorn-flick spectacle, but then he uses it to distract those casual cynics in the audience while he sneaks in a message that should really be discussed more broadly than it is, if only we still had conversations of this kind instead of trying to shut each other up. It also doesn’t hurt that he doesn’t get so hung up on his message that it distracts him from making his latest project, which judging by the quality of the work he puts out, is something he really loves to do.

So if you’re on the fence about seeing this movie, take a chance. But for the sake of all that is best in humanity, turn your cellphone off and pay attention. There’s more going on up on that screen than you think.

Batman v Superman: Dawn of Justice is rated PG-13 for intense sequences of violence and action throughout, and some sensuality.