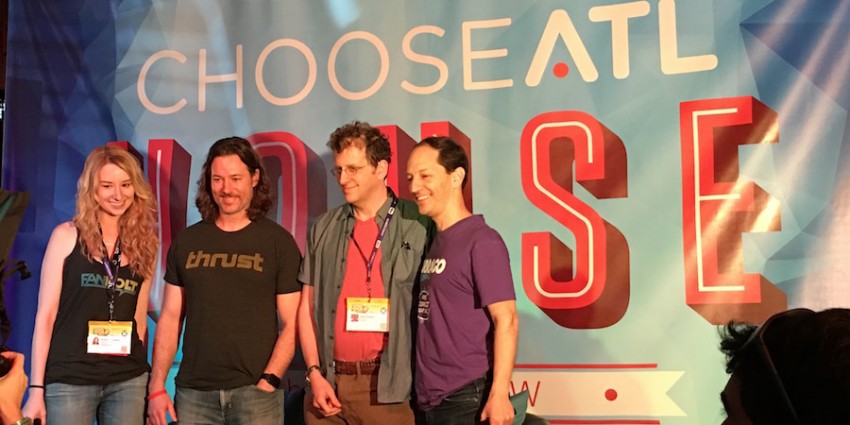 Atlanta has a long history of film and tv filming and has been host to some of the biggest hits on movie and television in the past 10 years including movies like The Hunger Games and TV shows like The Walking Dead. ChooseATL brought the ‘ChooseATL House’ to South By South West (SxSW) featuring the best of the entertainment industry that Atlanta has to offer with a huge line up of talent throughout the weekend. We highlight two of those events below with “The Rise of Comic Book/Geek Culture” panel featuring fellow blogger, Atlanta native and geek girl expert Emma Loggins of FanBolt and interviews with The Walking Dead producers. 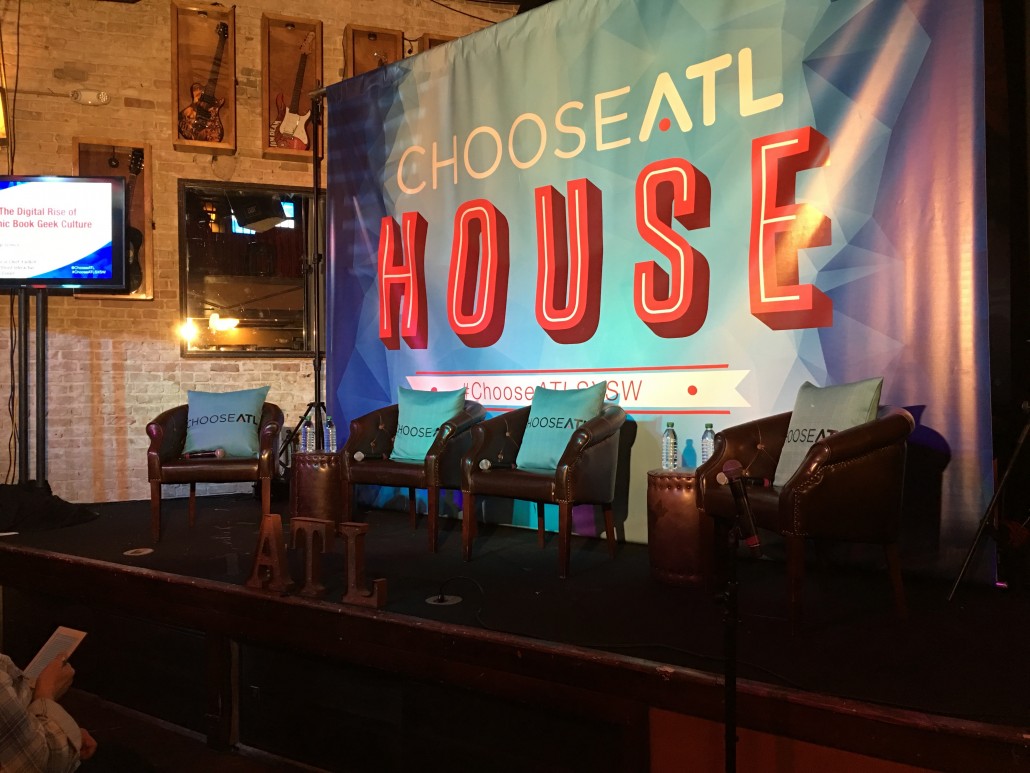 The Rise of Comic Book/Geek Culture

ChooseATL House featured a panel of Geek Culture experts to discuss the rise of Comic Book and Geek culture and what it means for each in their specific areas. Panel featured Emma Loggins, founder and editor of the entertainment site FanBolt, Emmy-winning writer and sci-fi comedy author, Rob Kutner, Jesse Lindsley, Found and CEO of Thrust Interactive and moderator Martin Fleischmann CEO of Farrago Comics.

Each panelist discussed the impact that the rise of Comic Book and Geek culture has had on each of their industries from Digital Comic Sales, Gaming Apps, Comedy/Writing and Geek Culture as a whole. The industry is finding out rather quickly that unexpected underdog and lesser known super heroes (like Guardians Of The Galaxy) can actually work. That is leading to an influx of lesser known or rather lesser represented comic book heroes to step into the lime light. 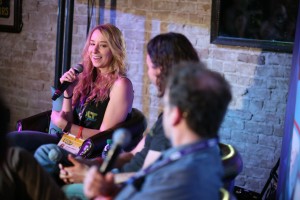 Fleischmann outlined the industry as a whole noting it broke down into several categories going from the smallest (those who actually buy the physical comics) to those who watch comic-based films but don’t buy comics. Jesse and Emma both commented on how social media has impacted the rise of geek culture commenting that convention attendance has skyrocketed with new conventions popping up every year. Social media has allowed those who were less vocal about their love for everything geeky until hey knew just how many others were as geeky as they were and now more are attending events to get together and “geek out”.

Here are a selection of the Q and A where panelists talk about the passion of comic fans versus those who just watch the movies/shows they are based on and Geek cultures love/hate relationship with The Big Bang Theory.

Shooting Film in the Digital Age – The Walking Dead

ChooseATL hosts a panel on Shooting Film in the Digital Age on its rooftop in Austin on March 13, 2016. Moderator: Michael Brown, Tom Luse (EP) and Michael Satrazemis (DP) from “The Walking Dead”. During the discussion Satrazemis explained how it was Tom Luse who pushed for The Walking Dead to go to 16mm film rather than digital. There were several reasons for that and each had a pro and con. 16mm provided a richer end product and greatly reduced post-production editing to bring back that richness that you would normally need with digital. In a sense Michael said, digital shows everything and it requires a lot of touch up post-production to smooth out any noticeable imperfections in makeup. Film does not need all that touch up.

Michael Brown who works in film processing added that the use of 16mm film meant that they had very long days of processing thousands of feet of film for single episodes. Satrazemis stressed that the con of all the film that needed processing was out weighted by the low cost and ease of use/movement of 16mm equipment and being able to shoot many different cameras at once not worrying about a monitor in the tech village. 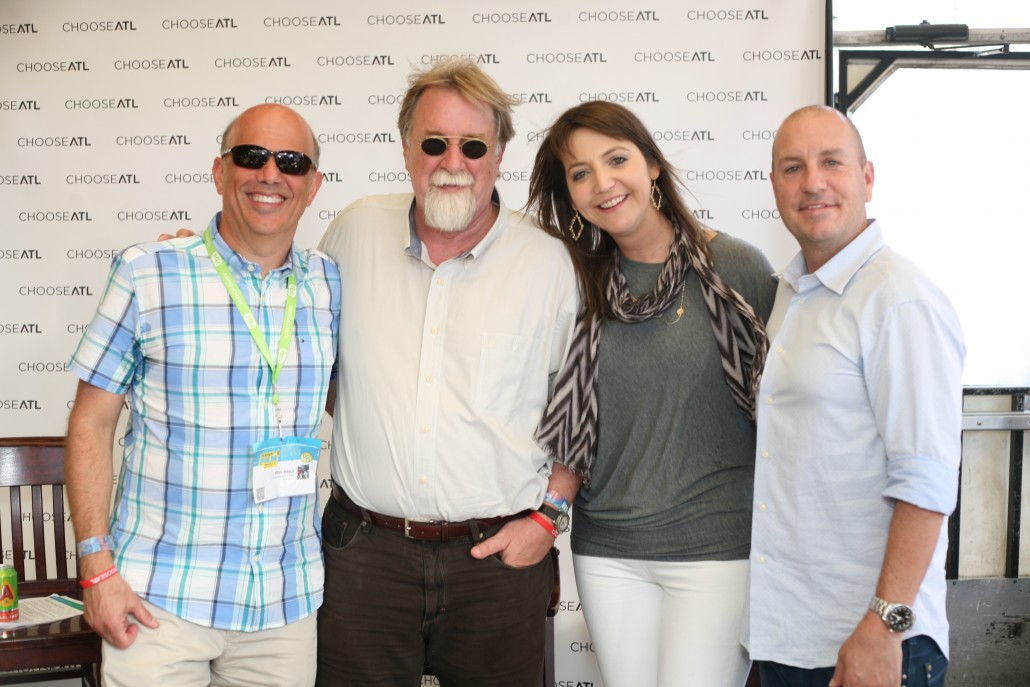 While we didn’t get any spoilers for the new season of The Walking Dead, recent news broke that most of the lead cast including Andrew Lincoln and Melissa McBride have both been quoted as saying it is ‘very dark’ and ‘they were speechless after reading the script’. So stay tuned.

Learn more about the ChooseATL movement and what Atlanta has to over over at ChooseATL.com

Today, Atlantans are experiencing an exceptional quality of life and unlimited opportunity. It’s a vibrancy that only happens when culture and industry collide. ChooseATL will bring this phenomenon to life in the Austin Speakeasy during SXSW 2016 on March 13-14.

Dubbed the “ChooseATL House,” the two-day experience will include groundbreaking industry announcements, SXSW panels and memorable parties featuring talent from a crossover of genres. Discover the hustle and hospitality of our people, and the culture of our booming region as Atlanta makes its mark in Austin.

The South is at the forefront of a technological boom. In fact, Forbes ranks New Orleans as America’s #1 New Brainpower City and it’s also the #3 city winning the battle for high-tech jobs. Atlanta is also renowned as one of the Top 10 cities for tech startups, and in 2014 venture capital investment in Georgia was the highest that it had been in decades.

In just two years, AR|PR has created more than a dozen jobs, increased our tech client roster by 700% and opened a second office in the emerging tech hub of New Orleans. After a whirlwind two years, AR|PR was named national 2014 Small Agency of Year by a panel of journalists. Then in 2015, Anna Ruth was named Business Person of the Year by the Metro Atlanta Chamber.

AR|PR has a proven record of executing strategic social media and marketing campaigns and securing media coverage in some of the nation’s biggest outlets, such as CNN, Fast Company, Forbes, Mashable, TechCrunch, TODAY Show and The Wall Street Journal. In addition, our clients have received awards and recognition ranging from “startup to watch” to “best app” to “innovation winner” from some of the most respected tech organizations like the Consumer Electronics Show, Tech Cocktail and The Next Web. Over the past two years, our clients have announced nearly $200M in funds raised and exits. In case you were wondering, all these results are what #makenews really means.