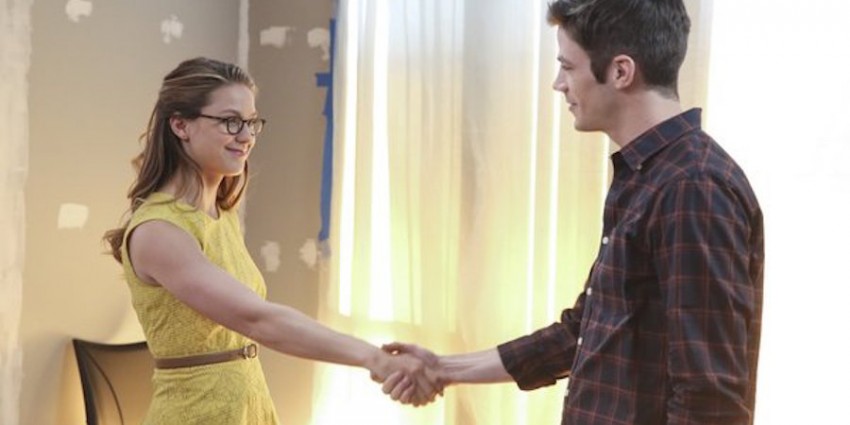 If one superhero isn’t enough for you, then I hope you watched this week’s episode of ‘Supergirl’ titled “Worlds Finest.” In a crazy twist of the space time continuum, The Flash, who has his own show on the CW, appeared in National City and ended up being an incredible help to our favorite Kryptonian. And after some rather serious and somber episodes, the mood finally broke and our characters were able to smile, laugh, and generally have a good time. When they weren’t catching bad guys, of course.

Flash: “You don’t seem that bothered by the fact that you’re on fire.”

My favorite part of this episode was the dialogue between The Flash (aka Barry Allen) and Supergirl. The writers did an incredible job of making it funny and fresh and witty. From the moment they meet and Barry accidentally sets Kara on fire, to their last battle with Siobhan and Livewire, they had a connection that transcended their individual shows. Maybe it was just great writing, or great acting, or great chemistry, but whatever it was, it made the viewer feel like sweet bubbles of happiness were being broadcast out of the television.

Supergirl: “Who are you?”

Supergirl: “The who now?”

When Barry ‘saves’ Kara from her fall, and I use the term save loosely, I was shocked by the reaction, or lack of reaction by her coworkers. Winn and James both know that she’s really Supergirl, but everyone else seemed non plussed that Cat’s assistant fell 40 stories, was rescued by an unknown person, she went home and changed her clothes, and waltzes back into the office all sweet and barely winded. I mean, come on! I’d need anti-anxiety medication and a good shrink if that happened to a colleague. Well, okay, certain colleagues.

But just as I was starting to question the sanity of the characters, Barry and Kara have another witty exchange and I was back in love with them all. Winn and James’ reactions to Barry were hilarious in their polarity. Winn fangirled like a pro and their discussion of the theoretical multiverse had me in nerd heaven. James was quietly teeming in the corner like a toddler kicked out of play group. He seemed threatened not only by the addition of a new nerd to their posse, but also concerned that Kara might turn her affections away from him.

Winn: “Jealousy, thy name is Olsen.”

Winn and Lucy both recognized that James felt threatened by Barry and this is where the writing got a little ‘romance novelish’ for me (which I like, you should see my book collection). It just seemed odd that the ex-girlfriend would suddenly be telling James to pursue his love of Kara and that Winn, the guy-that-has-been-in-love-with-her-for-ever does the same thing. Maybe they, understanding unrequited love, are tired of him not acting on Kara’s encouragement. After all, it seems that the universe (aka the writer’s room) is conspiring to put James and Kara together. 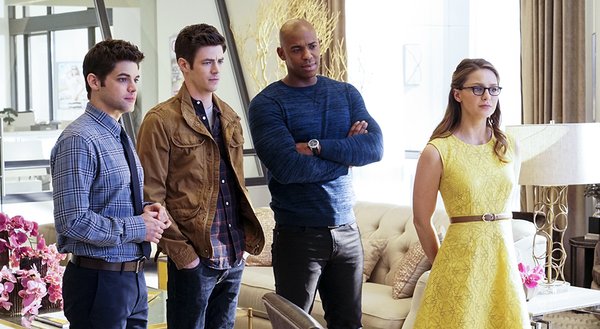 Cat Grant: “All four of you standing there doing nothing. You look like the attractive yet non-threatening racially diverse cast of a CW show.”

I laughed out loud at this line. Cat references the CW network which is where “The Flash” airs and I thought it was just a nice way to bridge the two shows. For me, Cat Grant won the night for best character. She was tough and forthright discussing Kara’s love life with her, scared and honest when asking Livewire to spare her life, and then so funny telling Kara that she knew who Barry was all along.

Her most amusing moment was in her office when she shot down Barry’s suggestion that she call the unknown superhero “The Flash.” That to her it sounded more like a guy “jumping out of an alley in a trench coat” was perfect. If we know one thing about Cat, it’s that she can deliver a put down with aplomb. I can’t say that her name, “The Blur,” sounded better to me, but maybe it’s just a work in progress.  Really, with each passing episode I love her character more and more but we all know there’s a reason that she doesn’t exist in Barry’s universe: any more than one Cat Grant and the cosmos would surely implode. 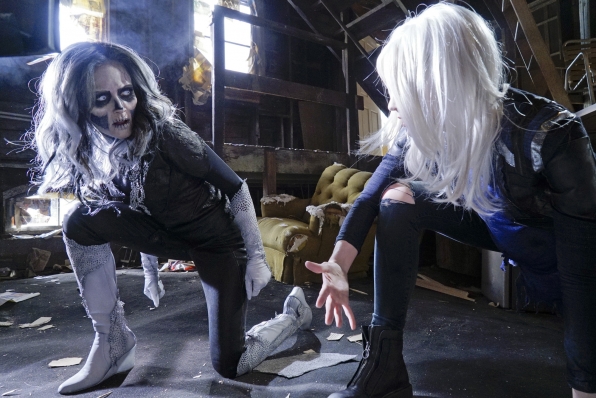 Silver Banshee and Livewire team up. Photo by CBS.

With all the good humor going on, though, let’s not forget the enormous threat that Siobhan, now Silver Banshee, and Livewire presented. Siobhan finally transformed into her more evil alternate self and we got a pretty cool backstory to go with it. While not identical to the comic book plot, I thought the writers did well keeping in the same theme as they explained why Siobhan was able to shriek so loudly. I liked the idea that the curse had followed the women through the decades and that they either had to kill the object of their anger, or lose their soul and get locked into the Banshee form forever. Rock, meet hard place.

Aunt Sinead was quite the mysterious and dark humored personality.  When she all but admitted to killing her husband, Uncle William, it was done with no more emotion than one might discuss getting a flat tire. An inconvenience, but nothing to lose sleep over. Siobhan’s reaction was even more telling. Unfazed by auntie dearest’s story, she decided to kill Kara by teaming up with Livewire.

Siobhan: “Figured we could team up.”

Yes, Livewire, exactly like an evil Taylor Swift squad. For a woman with so much anger, she’s a character with a great sense of humor. I loved the evil girl power theme the two of them shared throughout the episode. One broke the other out of DEO jail, one helped the other dress like a villainous badass. Between super sonic screams and electrical shock, they were better prepared for a fight than the heroes of the show. If they weren’t so focused on killing their arch enemies, could have spent more than one episode causing trouble and wreaking havoc. Since neither died, maybe we’ll get to see them team up again. 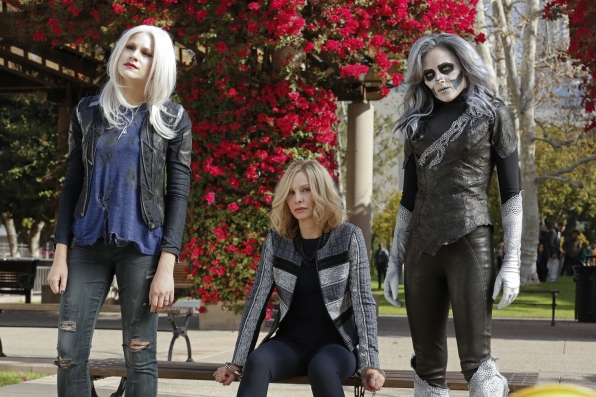 Flash: “Hey Sparky. Shrieky. Hi. What do you say we step away from the nice lady? Settle this like women. [pause] What? There’s more of you guys here than me.”

Winn did his best during the course of the show to convince Siobhan that she needed to give up her thirst for vengeance but his pleas fell on deaf ears. I liked seeing how much heart Winn has; his character is empathetic to those around him and he certainly tries to do the right thing. Still, when your girlfriend starts hanging out with another woman all the time, they dress alike, and she paints her face like a skeleton/zombie, maybe you should take a hint.

As for the end of “Worlds Finest,” I can’t say it’s my favorite. As compelling as the dialogue between characters was, the way Livewire and Siobhan were defeated felt under developed. Washing Livewire out -again- was just sad. It’s electricity! There are non-conductive materials, Faraday cages and all kinds of cooler things they might have tried to short circuit Livewire, but I can see that my nerd bone is showing.

Fireman: “Supergirl. It was our turn to help you.”

Supergirl did get her moment to shine and thereby reasserted her good name with the crowd in the park.  The fact that it was the human population that both moved in to protect her and stopped our villains was a unique twist. That characters of the show are usually so isolated from one another that it was startling to see a group of them working together. Bringing in the handsome firefighters to save the day was also a nice touch. We’ve not had humans empowered to save themselves for the duration of this first season and that element was an unexpected surprise.

All in all, I think this was a crazy cool episode. Bringing in Barry Allen/The Flash gave our heroine a reason to smile and let loose. We got not one angry villain but two and a  heck of a kiss between Kara and James. The show ended on a high note when Non reappeared and unleashed Myriad, or at least a part of his secret plan. What does he plan to do with all these people under mind control? Is subjugation is ultimate goal or is there something far more nefarious on the horizon? And then there’s Hank and Alex who are still in the wind. Either way, I’ll be watching the next episode and I hope you will be too.