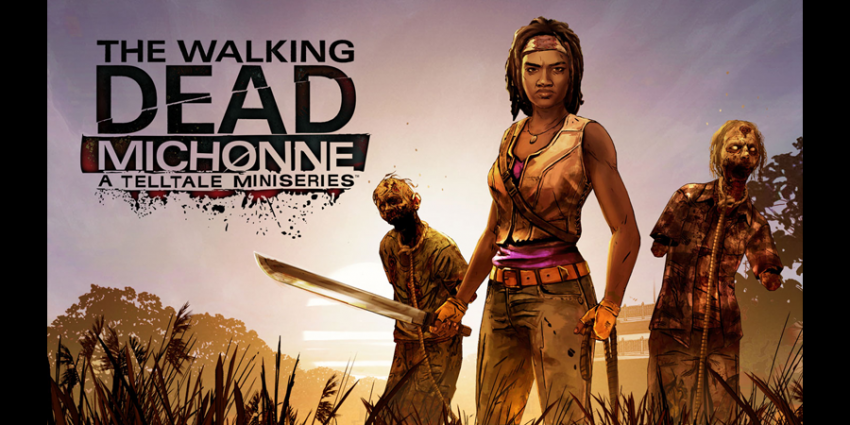 The Walking Dead: Michonne – Episode 2: Give No Shelter – Review

Has it been a month already? Telltale Games has released the second episode of The Walking Dead: Michonne, part two of the three-part miniseries covering that period in the comics when Michonne was mysteriously absent from Rick Grimes’ band of intrepid post-apocalyptic survivalists.

Not sure how necessary the warning was with my review of episode one, but this time I mean it: spoilers follow.

The plot of episode two is logical, but extremely simple: get the fudge out of Monroe, find safety, mourn Greg at some point. Oh, and have more Crazy Times along the way as Michonne goes for another spin on the broken carnival ride that is her psyche. Following the death of Greg, Michonne and Samantha enact their plan to escape the floating village of Monroe. Of course their escape doesn’t go unnoticed, and so they flee through the woods with pursuers hot on their heels. They reach safety, only to be met with a guard giving the same “No way, I’m not letting you in! You could be one o’ them!” speech we’ve all heard ad nauseum. But the guard does let them in, and so the episode goes traipsing merrily along to the cliffhanger. See you next month, kiddies, and don’t forget to check out The Walking Dead comics, novels, TV shows, mobile games, ice cream, mouthwash, nylons …. The story is just that predictable, and notable only because it features one of the lamest red shirt deaths I’ve seen in a while. Seriously, the character’s last words might as well have been “I’ll be right back.”

But I will say this about the story, overall: my fears are true. They are retconning Michonne’s backstory. Now credit where it’s due: when Robert Kirkman retcons, he doesn’t mess around, as the new version is vastly different from the old one. What it isn’t is interesting: those two little girls Michonne sees when she goes off the rails are, in fact, her daughters, of which she had none in her original origin. Michonne was (yawn) a single mother before the outbreak. Sorry, but it seems to be getting to the point where the number of female character types in fiction in general can be counted on one hand; I thought this was supposed to be a bold new age for women!

On the plus side, though, the story pacing benefits from having gotten past all the setup and exposition of the first chapter. It took me about an hour to get through this episode, but it felt much quicker. I ran into some technical issues towards the end, a problem that keeps popping up from where I can barely hear what a character is saying, but I can hear the music and sound effects just fine. I’m glad we can turn the music down in the settings at least, but I wish voices had their own volume control.

If you haven’t gotten caught up on Michonne’s latest exploits yet, this series has yet to give me any reason why you shouldn’t save your fifteen bucks. Walking Dead fans will probably be satisfied, but I’m starting to think it’s probably time for Telltale to step their game up more than they have with these projects. It feels like they’re just coasting, now, and that’s a shame.

The Walking Dead: Michonne, Episode Two: Give No Shelter is rated M for Mature, for Intense Violence, Blood and Gore, Sexual Themes, and Strong Language.