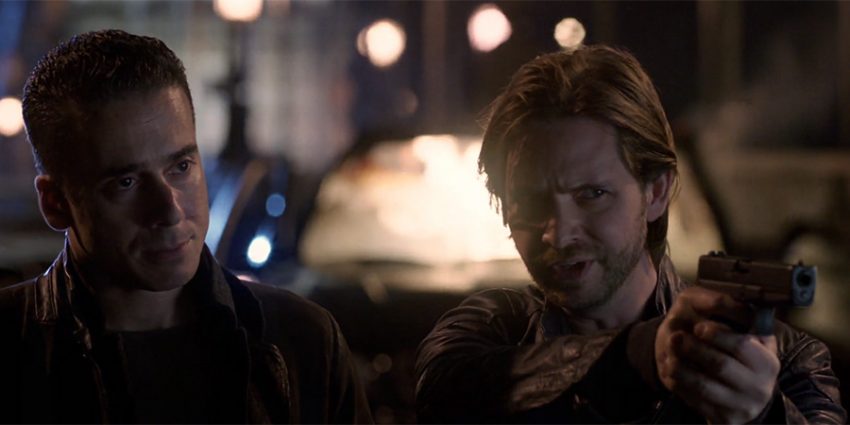 The first episode of 12 Monkeys’ second season picks up in 2016, allowing some time to have passed since we last checked in with the time traveling circus. Some cliffhanger questions get answered right away in this episode, so I’ll address those first. Cole and Ramse have formed an alliance and although they are not working toward the common purpose of rescuing humanity from the plague, they are watching out for each other. Also, Cole’s gambit of sending a gutshot Cassie ahead in time to have Jones patch her up appears to have worked. As cliffhangers go, these two supposedly life-threatening injuries are cured and treated offstage, barely mentioned, and treated as annoyances on the order of poison ivy rather than something potentially lethal.

The season kicks off with an ambush planned by Cole and Ramse to take out Olivia, but things go haywire when the all-knowing Witness sends along reinforcements. Cole knows he can’t fully trust Ramse and he admits as much when he says they should go their separate ways. I can’t figure out what Ramse is doing. On the surface, loyalty to Cole as the guy that did not leave him to die from Cassie’s gunshot wound would be a pretty good motivator, but it doesn’t work for me. Ramse spent almost forty years betraying Cole and the work Cole was sent back to do to ensure the place his son would have in the future. Most people having put forty years into something are not quick to change their opinion, which leaves me wondering if Ramse is biding his time for an opportunity to betray Cole or if he can actually be trusted. There was a moment when he could have kept the location of the plague’s deployment a secret. Instead, he not only told Cole he needed to go to Manhattan, but stayed on Team Cole as well. Ramse’s motivation and wondering when Ramse’s next betrayal will happen look to be a continuing theme for my 12 Monkeys viewing this season. Cole, on the other hand, is very much business as usual, appearing to have adjusted to his new time-traveless lot in life in stride.

Cassie, upon whose talents as virologist rests the entire fate of humanity, pulled through her injury. She’s alive and well in the future, but captive along with Jones in the time travel installation by the combined forces of Deacon and The Twelve (whom Jones also called the Messengers). Deacon and Jones, veterans of the harsh future, both give her words of wisdom that serve to shape Cassie’s future. Jones, whom Cassie has met in her past and has recently saved Cassie from not-quite-certain death, is surprisingly sympathetic to Cassie. Instead of the cool, aloof Jones of season 1, we hear her offer, “Grieving over who we were only gets in the way of who we need to become,” as a source of inspiration. Cassie has no way to know this, but this is a soft side of Jones she has never revealed to us. Deacon, however, is there to toughen Cassie up. The words he uses as the guiding doctrine of the West 7 are all he has to offer Cassie during their alliance sealing jailbreak: “Let him live, you create an enemy.”  From the get-go, Cassie is being told to let go of who she was and what she must do to survive the future. Fast-forward to the end of the episode and it looks like she has taken all of their advice to heart. 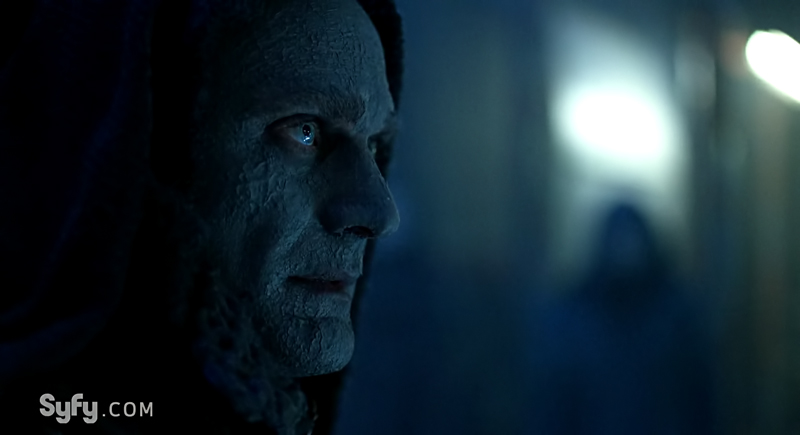 The leader Monkey looks pretty sure of himself. Image by SyFy.

Jones says they are called, “The Messengers,” and Cassie knows them as, “The Twelve.” With Deacon’s help at the end of last season, they broke into the time travel installation and took it over. In this episode we get to see six of The Twelve set off on various missions of unknown purpose using the time machine. We also get a glimpse of a quasi-religious looking ceremony involving the scraping off of their crusty exteriors to reveal normal looking, even surprisingly young people. My assumption is these acolytes are being sent into the past to seed the 12 Monkey message into history, perhaps even causing their own creation (very timey-wimey, wibbly-wobbly there). Questions abound and nothing is answered. Where did they go? Jones was locked out and doesn’t know. What was their mission? Badness, probably. What’s with the crusty exterior? During the ceremony, you get a sense of rebirth or rite of passage for the individual, but maybe there’s something else. By the end of the episode, six went on time travel missions and it looked like the rest were killed in way or another (Jones get extra style points in this category).

The modern day 12 Monkeys crew (Olivia and the black sweater gang) invoke the name of the Witness to justify any action that they take or is undertaken around them. “The Witness says this,” and, “The Witness does NOT say that,” is all we hear out of that bunch. Olivia acts on Witness orders to find and kill Ramse, saying he has fulfilled his purpose, but then calls her own shot to push Jennifer to finish the virus already. Later, on the rooftop with Cole and Jennifer, a Monkey tries to reason with Cole by saying the Witness foresaw Ramse dying in the Raritan Valley Lab and Cole had really messed things up by saving his life. At this point, the Witness has to be somebody we already know, but having come back from the future. My current bet… Let’s go nuts and say Cassie. 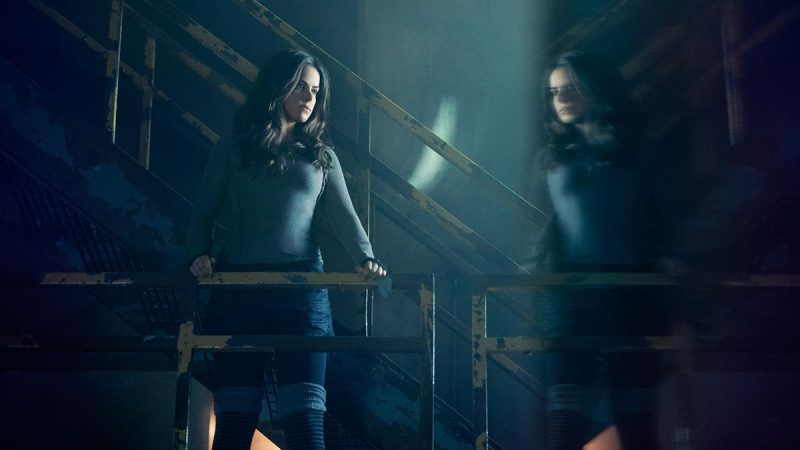 I love the song “White Rabbit” used here, for Jennifer’s re-introduction. This is the Emiliana Torrini version you might have heard in the movie Sucker Punch, rather than the classic Jefferson Starship version. The song, plus Jennifer’s behavior, gives me a suggestion of Jennifer having sought some medicinal assistance to make it through her day. She has a self-given mission this episode and she’s legitimately sad she can’t complete it. She wants to find a reason to allow the human race to live. She’ll take any glimmer of mankind’s worthiness to continue existing, either  by randomly sampling the populace or by accepting Cole’s Chinatown intervention. As a member of humanity, I have to offer some criticism of the idea of using some horny boob from a speed-dating session as a sample. He doesn’t represent us! Don’t judge us all by a grown man with that haircut, Jennifer!

Fate vs Re-writing the Future

This is the big deal this season and maybe the entire show. Jones sends Cole back in time to prevent the plague believing it will simply erase the future they live in and re-write it with something much better. Cole and Cassie buy in to this plan whole heartedly. The Twelve, however, take more of a “whatever is supposed to happen, will happen,” approach. This apparently includes using time travel to make things happen. There’s a moment when The Twelve are prepared to kill Cassie to coerce Jones’ participation and they are momentarily proven correct as fate (or something) steps in and grants their time travel machine technician access to the previously locked time travel machine. This would make me crazy, if I were Jones (or Cassie or Cole…), as I would constantly be wondering if I were acting of my own free-will or if I were simply playing a part in a pre-ordained script. Be on the lookout for this problem to catch up with at least one of our principal characters before the end of the series.

Although the episode didn’t really cash in on the cliffhangers we were left with last season, there’s more than enough here to make you want to keep watching. Especially now that we have an armed an loaded Dr. Cassie Railly to deal with…