Book Review: The Legend of Tephra

The Legend of Tephra by Carolin J.V. Milner is one of those lovely little gems that finds you and then takes you on a fantastic journey away from yourself for a while, something that all the best books do.  This is the first book for the author who did both the writing and all the artwork for the novel – something that you don’t see all that often.

The novel itself is meant for middle-schoolers and was written with them primarily in mind, but reading knows no age limit or boundary.  I found this to be a very lovely read.  It begins with a prophecy, as loads of good fantasy does.  The prophecy talks about the end of a certain way of life, of discord and bloodshed, which is standard stuff for the genre, but dramatically sends shockwaves through the sleepy little village of Drumlin.  Life in Drumlin is peaceful and has been for ages, made up of several clans and the customs and traditions that bind them all together.  Discord and bloodshed is unheard of there. 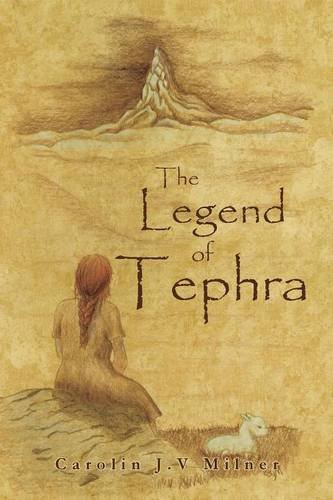 Cover Art for The Legend of Tephra, done by Carolin Milner herself

Tephra, a young shepherdess from one of the clans there, someone who is considered to be a favorite of the Drumlin god, The Always, is right on the cusp of adulthood. She dances in the village ceremonies and sings to her flock, to her family, and wherever she is.   The Drumlin culture can be very rigid for someone who is as independent as she is and we see moments here and there, of her pushing the edges of her societal conventions in small ways.

Where it all starts to change is when she is supposed to undergo a special kind of purification ritual before she is mated off to Graben, who is the young champion of the village’s festivals, and an upstanding member of Drumlin’s richest clan, the Earth-Tillers.   The rituals involve being left alone in a cave with food and bedding with a strict set of prayers and meditation to undergo before the next dawn brings the mating rituals and the beginning of her new life with Graben.

Except that her prayers are interrupted by the distressed noises of what she believes to be a lamb and her big heart and shepherdess training won’t permit her to be still and ignore it.  So she leaves the cave and climbs up to rescue it  – it’s not a lamb, but a baby kid goat belonging to members of the people on the other side of the mountain who are the “forbidden people.”

Her choice to save the lamb and what happens after that kick off a chain of events that challenge the way of life and customs of the Drumlins.  Old fears and older superstitions begin to tear at the bedrock of Drumlin society, and it seems like the prophecy will come true.

Tephra herself learns some valuable lessons about herself and about the customs of her people and how not everything that she learned as a child was actually true.  That the forbidden people are not as she feared they would be, they’re not evil, just different, and how it’s possible for the two societies to meet on common ground.

This book took a while for me to get into it but it was very good, it’s written in such a way that better lends itself to being read aloud than anything else.  So I do encourage you to pick this up and read out loud because the experience there is much more enriching.    The prophecy wasn’t fully resolved, but Mrs. Milner has stated that there is a sequel in the works that should answer some of the questions you’re still left with at the end of the novel.  The worldbuilding here is magnificent, it’s well fleshed out and very detailed. As someone who has spent a long period of time living outside of their passport country, I resonated a lot with the culture shock that Tephra goes through, both with the forbidden people and then later on as she rejoins her village.

So this definitely was worth a read and I’m looking forward to seeing what comes next from this author.