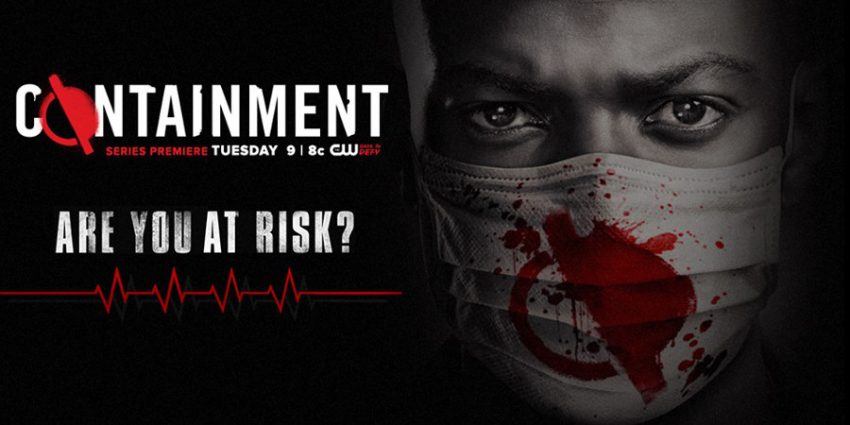 I don’t know why this first episode of Containment did not have an actual title, other than “Pilot”, so I decided to make one of my own. I thought “Four to six feet” would be a great title since we heard it a lot throughout the episode. I don’t know about anybody else, but after watching the bloody ick factor happen several times, I think I would be hiding in a bomb shelter somewhere, all by my little lonesome. At least, until I found a way to screen potential bunker mates.

I think it would be similar to the questions Rick Grimes and company have for those who want to join their group in The Walking Dead. The first question would be “Have you been around anyone infected”? Two: “Has anyone sneezed on you in the past 10 minutes”? and Three “Have you been around someone who coughed up blood”? If the answer is no, then they could be my bunk-mate!

I am not a morbid person, but I like these kind of apocalyptic type shows, because I like to see good people ban together to save the lives of their fellow human beings. I know that is not always the case, as we witnessed what was happening by day 13 of the outbreak in Containment. They were rioting in the streets, and willing to kill whoever got in their way. I would like to think that this would not happen, but I know that some rioting, and looting would be taking place during a time like this.

Image Courtesy of the CW

I have only known Julie Plec’s work through The Vampire Diaries, and The Originals, and I love that she is doing something different. I love how the show began with the aftermath of the outbreak, and then rewound to the very beginning to show us viewers what happened. I have always been a fan of that kind of story-telling, as long as it does not get confusing. I can’t say if that is always how this story will be told, but I would not mind it, provided that it serves the story being told well.

The stand out characters for me right now are Victor (George Young), Alex (David Gyasi), Jake (Chris Wood), and Katie (Kristen Gutoskie). I am sure that will change as more s**t that hits the fan happens, and it really was only supposed to be a 48 hour hold. I took the hold to me that by the time 48 hours is up, they would know how many got infected, or if it took any longer maybe. Since it was only supposed to be a 48 hour Containment,something huge must have happened in that time, because 13 days had gone by!

Only 48 hours. What could go wrong? Thanks for watching series premiere of #Containment. pic.twitter.com/AkzFozNRCB

As the season goes on, and I get more into the lives of each individual character and their feelings, I will be talking more about that aspect of the show, and how the Containment effects them. I just wanted to give my overall first impression of the show, and I have to say I loved it. It is super scary to think this is something that can actually happen, and while I would not wish it on my worst enemy, I like to see how the world can come together, and fight against something bad that is happening. We know that there is that fight or flight mode in all of us, but what do you do when the going gets tough?

My first impression of Containment: Scary Good! What did you think of the pilot episode? Will you be tuning in every week to see what happens next?