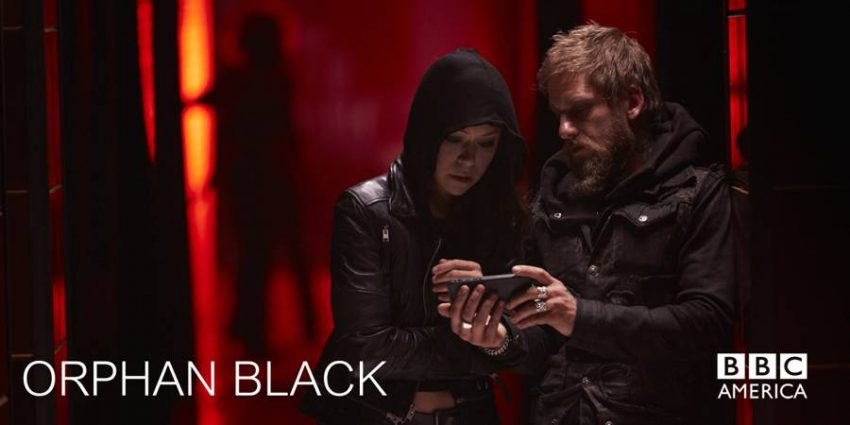 I may have found last week’s premiere a bit lacking, but that was easily made up for in the second episode of Orphan Black’s fourth season.  Now that all the setup for previously unseen past events has been taken care of, we’re left to enjoy the wild ride ahead.  Episode 402 wasted no time, picking up right where we left off last week with the impending arrival of Neolutionist thugs at Sarah’s isolated Icelandic doorstep.

While it looked like Sarah, Kira, Mrs. S, and Kendall would be overrun in minutes, they somehow managed to make a clean getaway.  All we really saw was S setting the cabin on fire and next thing you know they’re back in the States with Kendall grousing about hiding in the cargo hold of a plane and the back of a truck.  She’s curmudgeonly, but amusingly so.  I could see Sarah being much like her in her twilight years, if she lives that long.

The truck in question drops the ladies off at a comic book store where one of S’s friends take Kira and Kendall to safety.  Sarah and S go inside and are escorted to the basement where Cosima and Scott have set up a makeshift lab.  The lab was put together from “acquired” Dyad equipment and a generous contribution from the Hendrix Drug Cartel. 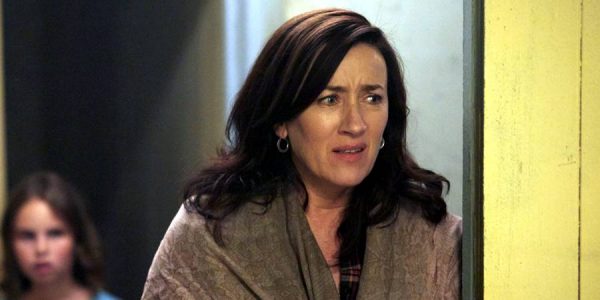 “The fun’s just getting started and you want to sideline us?!” (Image courtesy BBC America)

Cosima and Scott have been working on a treatment using Kendall’s original DNA.  During one of the tests, Scott notices an elevated white blood cell count and expresses his concern to Kendall in private.  She confides in him that she has leukemia and doesn’t want anyone to know because she doesn’t want the pity.  This revelation puts a second time clock on the research.  Great, more pressure!  Just what a dying scientist needs to focus.

Since MK bolted, leaving them without a source of information, Sarah and Art go to Beth’s flat, which is sitting unused.  They find the hidden camera Beth set up to spy on Paul and begin watching the recordings.  This served as a good vehicle to flash between the past and present without being confusing.

In one of the first flashbacks, Duko is at Beth’s place being all ominous and threatening and vague and weaselly and stuff.  I don’t like him.  I bet his mother doesn’t, either.  But the really interesting stuff comes a little later.

Beth dons a blonde wig, grabs a gun, picks up what looks like a hotel keycard, and leaves.  When she returns, there’s blood on her hands and she looks really agitated.  When MK pops out of the shadows in her apartment, Beth freaks the hell out.  I would, too.  MK’s pretty freaked, herself.  I would be, too.  Let’s all just take a moment and freak out with our girls, shall we?

MK wants to know what’s going on, but Beth locks herself in the bathroom and cuts up the keycard into the toilet.  When she finally emerges, she’s really upset and tells MK that they just can’t fight any more because she, Beth, screwed up.  Wearing a very familiar outfit we saw a few years ago, Beth hugs MK and says, “Watch the others for me.”  This was the night she stepped into the path of a big, old train. 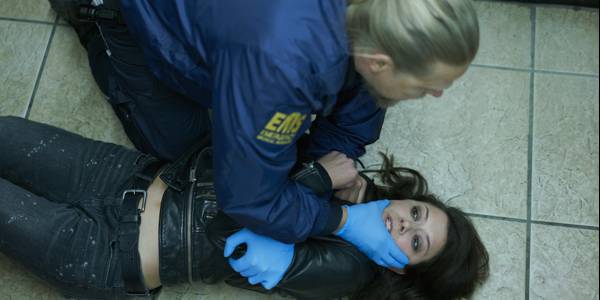 Still on the hunt, Beth gets Felix to go to the Neolutionist bar with her to try and find the pregnant girl.  A guy there, Dizzy, mistakes Sarah for MK and shows her a video of an attempted worm extraction that goes wrong.  Tendrils erupt from the worm and kill the subject.  Not cool, man.  After stealing Dizzy’s phone,  Sarah ends up in a Laundromat attempting to meet MK when the two killer paramedics come in.  It’s clear they’re about to do the total cheekectomy on Sarah, but the dude feels her cheek, says something in what I think is German, and the two leave.

Sarah goes home and has S look at her cheek with a flashlight and sure enough there’s a worm inside of her, too.  Dizzy mentioned that MK was the one who tipped him off, so the skittish clone apparently knows even more than we previously thought.  But does she know how to safely remove the worm without it killing Sarah?

I think we’ve gotten a clarification of the overall timeline in Orphan Black based on something Felix said to Sarah in the Neo bar.  She had a still of the pregnant Neo woman taken from Beth’s hidden camera footage and Felix noted that it was 6 months old.  So this would mean that current events are taking place about 6 months after Beth killed herself. 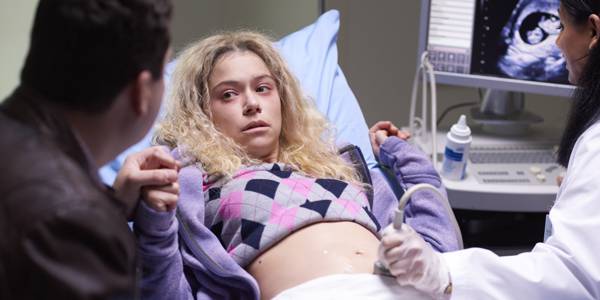 Oh, and we finally get some great Donnie/Helena action!  The two pretend to be a couple for Helena’s ultrasound and this elicits some hilarious dialogue from the pair.  From sexual positions while pregnant to feeling, “a little tired and many farts,” Helena and Donnie are always fun to watch.  And Helena’s having identical twins!  A clone is having children who are basically clones of each other.

Well, not everyone is overjoyed at the news.  Back at the house, Alison is clearly jealous of Helena’s ability to have children.  Fortunately, this results in one of the funniest exchanges of the episode:

These three were what the first episode needed a little more of.  Overall, it was a very satisfying and fun hour.  We still don’t know who tipped off the Neolutionists to Sarah’s very remote location and we don’t yet have confirmation of Delphine’s condition.  I’m really hoping we get the answers to both of these mysteries before the season is out.

And stay tuned for After the Black following each episode!