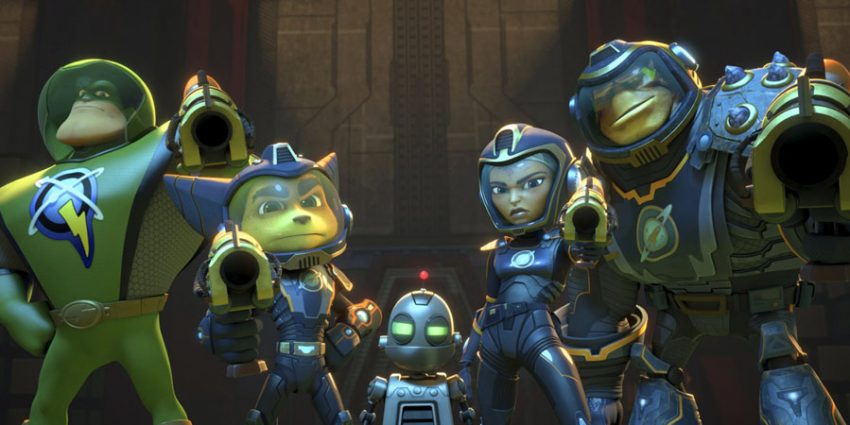 Ratchet and Clank – Review – A Solid Compromise, but We’ve Moved On

I find it a little hard to believe that it’s been fourteen years since the first Ratchet and Clank game appeared as part of the Playstation 2 lineup, but 2002 it was, and the math don’t lie. It’s strange that it took so long to make a movie out of a series that felt so much like playing a movie from its very beginnings. We almost got a Ratchet and Clank movie in 2005 — a live-action Ratchet and Clank movie. Just writing that gives me Super Mario Brothers flashbacks; sometimes waiting is a good thing.

The benefits of a fully CGI movie, by comparison, are readily apparent. First, all the characters look the way longtime fans expect them to, but more importantly, it allows the people who’ve been providing the voices of these characters to do so again. The film scores in this important area: Ratchet, Clank, and intergalactic poser Captain Qwark are voiced by the original voice actors, and every character is true to form, the good Captain especially. The plot is lifted from that first game: Supreme Executive Chairman Drek (Paul Giamatti) is going around the galaxy blowing up planets with the aid of the twisted Doctor Nefarious. Blowing up planets – even uninhabited ones – is something polite society frowns on, and so Captain Qwark and the Galactic Rangers are called on to confront this menace.

Some of the game’s most memorable scenes are included in the movie, including Clank’s origin. Some liberties are taken, too. If you’re a fan of the R&C series, as I am, you’ll likely notice that Doctor Nefarious doesn’t look like himself. Dont’ worry, that’ll change, although I don’t think an explanation of that particular part of R&C lore was entirely necessary. The story’s delivery isn’t quite up to the standards to which we’ve become accustomed in recent years; it isn’t a patch on The Lego Movie, for example. Instead the story feels like someone banged out a quick, generic space adventure for kids with a bog-standard “believe in yourself” message and a trite yet pithy moral — “you don’t have to do big things to be a hero, just the right things” — and then a better writer came in later and tried to save it. The result is writing that vacillates between smartly self-aware and the kind of corny cartoon dialogue that sounds really cool to a six-year-old. Fortunately, the latter doesn’t overwhelm the former.

The movie’s biggest weakness, for me, is that it just came out too late. As I said before, since Ratchet and Clank debuted the bar for animated movies has been raised many times over, not just in terms of technology, but in terms of writing. This Ratchet and Clank movie feels like a relic from ten years ago, and that doesn’t make it bad as such, but it does make it below average. Ratchet and Clank is a movie tie-in released in 2016 for a game released in 2002, and it doesn’t suck. It’s just no longer up to par, like if the great stop-motion animator Ray Harryhausen tried to make a new movie in his old style in our advanced special effects age. It just doesn’t fit here, so I salute the effort, but if this movie doesn’t get a sequel, I’ll shed no tears.

Ratchet and Clank is rated PG for action and some rude humor.