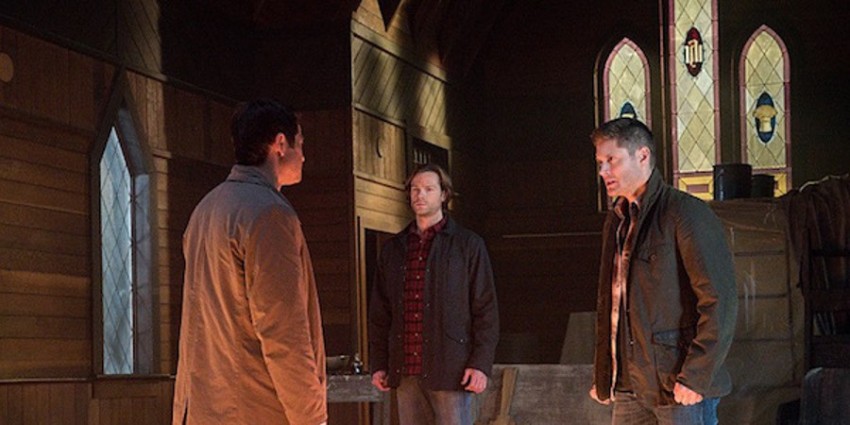 Supernatural: 1118 Review Who Knew There Was A “Hell’s Angel”?

By: Diane Selburg
Supernatural on The CW The CW

This episode, entitled Hell’s Angel seemed to be centered around God, and it left me to wonder if he will finally be making an appearance. I think I have been waiting on God to show up since the days of the apocalypse, but outside of Chuck writing the Supernatural story of Sam and Dean, we have not really seen or heard from him. We don’t really know if Chuck was actually God or not, it just seemed that way.

I have always liked the idea of God remaining a mystery on the show, because isn’t HE a mystery of sorts? HE is always there, you can’t see him, but you can feel him. Well, maybe not always, for the characters on the show,anyway. Dean has been questioning HIS existence for quite some now, and you really can’t blame him at all. The brothers Winchesters have been through a lot, and have met and faced death (Grim Reaper) many times, and still no word from God himself. They have met Lucifer, Michael, Raphael, and Gabriel, all of God’s Archangels, but they still have not laid eyes on God. At least, not that we know of, anyway.

I just wonder why, if all that the boys, and the rest of the world have seen, didn’t bring God back to Heaven or town, then why would Amara seemingly killing one of God’s (used to be) favorite archangels bring him back now?  God loves everyone, but yet could only come back for an angel who did nothing but question him? I guess it is the question of the day, but Amara certainly believes that it will bring her brother back, and she would not mind getting rid of old Lucy in the process. My only objection to that is loosing Castiel in the process, that would totally break my heart!

What will it take for the Winchesters to get Castiel back? See the latest #Supernatural: https://t.co/sAx1JWLX8xhttps://t.co/OdizEtmhgl

I always liked a well written good vs.evil story, and of course I always root for the good side. I would love if God did show up to put an end to his sister’s reign of terror, but I will miss the mystery of it all. Will he or won’t he show up? Is it too early for him to show up, or will it even be him that shows up? Will he just send Chuck in as a means to stall things, or will it be someone else?

I did not think for a minute that Lucifer would be the only one to be able to take Amara down, because before he had the help of God. I bet that God just wanted Lucy to think he needed help, and that he is the only one who can take her down. Of course, you have to wonder to yourself why God would make it possible for his sister to be able to come back, and cause more havoc?

The Darkness will not be ignored! #Supernatural is new NOW. pic.twitter.com/nQ6W6mgrDP

I didn’t really care for the fact that we had to see Rowena again, but she can provide some comic relief when the need arises. She switches her loyalties so fast, your head swims, and you know she cannot be trusted at all. I am ready for them to save Castiel already, but I am still wondering how they are going to get him to eject Lucy. He will still be a problem, because they need to lock him back into the cage. I may need to go back to some later episodes, because I bet I missed the reason why Sam and Dean’s brother was not in the cage as well. If Lucy could not get out, then neither could Michael. I am quite sure I missed it, because I don’t remember Micheal’s escape being mentioned. I digress, I will just research it.

After 11 seasons, it is hard to remember every little detail, even if you are a major fan. A super fan, however, probably can recite an episode, line for line, and scene by scene. I love that after 11 years, I can still managed to be shocked and surprised by this show. I am glad that after a few weeks of “filler episodes that the show got back to the story arc of this season. Now, if someone can just smite Amara for good, so our boys can get some down time, it would be appreciated!

What did you think of Hell’s Angel? Will God show up to save Lucifer, and by extension.Castiel? Sound off below!