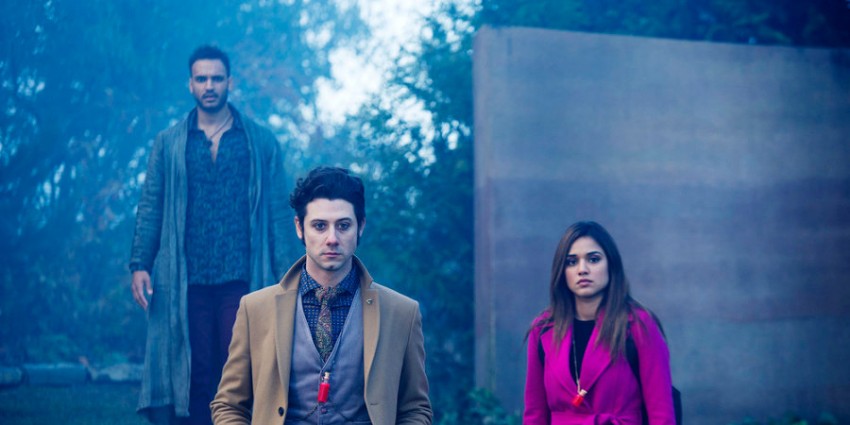 The Magicians: 112 Review “The One With “Thirty-Nine Graves”

The world building of The Magicians is just so, well, magical to be honest. I love how the story just keeps building upon itself, and at a fast pace too. It is not done at so fast a pace that the viewer cannot keep up though, unless they look away from their television screen one too many times. I think that only happens when live tweeting though! I loved everything about this episode, except for the fallout of the threesome though. This episode, Thirty-Nine Graves gave me quite a surprise,and one that I did not see coming, but probably should have!

I know that I rarely talk about Julia in my reviews, but she really has grown on me. At first, I thought she was just some spoiled, entitled woman , who threw a temper tantrum when she didn’t get what she wanted, but as I said, she has grown on me. She went through a lot of things, and jeopardized a lot of important things, just to learn a few magical spells. I thought to myself, for someone who no longer believed in all things magical, she sure got pissed off when Brakebills did not readily accept her as a student.

She truly was like an alcoholic, or drug addict looking for their next fix, so it’s no wonder that her family thought she belonged in rehab.When she first met Richard, and realized that he knew magic as well, I thought this is not going to turn out good. I did not know what Richard was after, or what his end game was, so I was very leery of him. We found out what that end game was, but I still want to know just where it is that he wanted to go. In the end, I think he was good for her, and she certainly became important to him. I figured a hook up between them was inevitable, but I am thinking now what? Where did he even go?  Will they see each other again? Now, this brings me to Our Lady Underground. 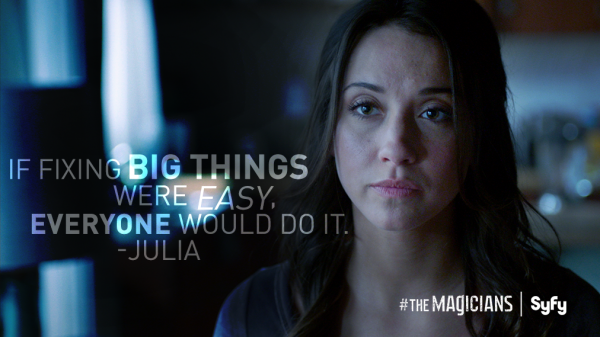 As of right now, this particular storyline has me baffled, I really don’t know how to take it. Quentin wanted to use magic to stop his father from dying of cancer, and was told that magic cannot fix everything. I recall saying in my review that “all magic comes with a price” and someone else always ends up paying that heavy price. However, this goddess did cure one of the hedge witches of breast cancer, sent Richard to God knows where-ever it was he wanted to go, and sent Kady on a mission.

I know she’s a Goddess, but would she do those things without wanting something in return? You can call me cynical if you want, and say maybe she just wanted to see a little faith, but I think there is more going on here than meets the eye.  I loved that Julia and Quentin made their back to each other, it was nice to see them together again, but Julia is the one who has learned more about herself, and benefited from the separation more than Quentin has.

I know that the three of them were all jacked up from having bottled up their emotions, and were drinking afterwards, but I was not a fan of it at all. Everyone makes mistakes, and does stupid things from time to time, but they were all being very immature about it all. None of them wanted to sit down and have a mature conversation about what happened, it felt like high school all over again. I did not get why Quentin wanted to put all the blame on Margo and Eliot, when he was just as much to blame.  I wanted to pull an Eliot, and say “Oh nut up” Quentin and take some responsibility for your own actions. Penny was the only sensible one in the bunch, trying to get them to stay focused on the task at hand.

I know Alice was hurt by the actions of her friends and boyfriend, but to sleep with Penny? I thought it was a low blow, and it is never a good thing to have rebound sex when you are feeling those kinds of emotions. It’s been a while since I was a bartender, but I don’t think Triple Sec alone will get a person drunk enough to lose your inhibitions like that, and have sex with someone that fast after having your heart-broken. I think a person would have to drink the whole bottle. Tequila or whiskey yes, Triple Sec no! Of course, I have never drank it by itself, but I digress. I think she would have had revenge sex with Penny with or without the Triple Sec. Penny didn’t mind, it’s not like he is besties with Quentin!

You could not pay me enough to be trapped in that dreary place, unless of course I could be the librarian, then we have a deal, I’m so in! I don’t know if what is broken inside Eliot can ever be fixed, but I sure hope so. Eliot has been on a downward spiral ever since he had to kill Mike, and he seems to be self-medicating with drugs and alcohol. It is just not looking good for him.  I really just want someone or something to heal him quickly. He just doesn’t seem to care about anything really, not even whether he lives or dies. I knew he would be the first one to eat the psychedelic carrots!

THIRTY-NINE GRAVES THAT LED TO FILLORY

What surprised me was the time loop that Dean Fogg told us about when Quentin went to question him about Fillory, and everything that has happened. It seems that Eliza, aka, Jane Chatwin, created a time loop in order to find a way to defeat the Beast. It just so happens that each time (39 in fact), Quentin has died and now with Jane being dead, the time loop has ended. I found it interesting for Dean Fogg to say what was different about this time? It seems that the answer was Julia, who should have been at Brakebills.I I wonder if Julia attended Brakebills the 38 times before? It might be something that we will never know.

I loved that this is how the Julia/Quentin reunion happened, because it showed some growth on Quentin’s part, now matter how small. I also love that they figured out how to get to Fillory together, and that they will be going together, just as they always dreamed. I know I am an adult, and no longer a kid, but when Julia and Quentin walked through the phone booth into Fillory, I had the same feeling of wonderment and joy that I did when Lucy went through the wardrobe into Narnia. I know I am not the only one either.

Did you get that same feeling? What did you think of this episode? Be sure to watch this space for my review of the season finale, and my overall thoughts of the season as a whole in a separate post next week!