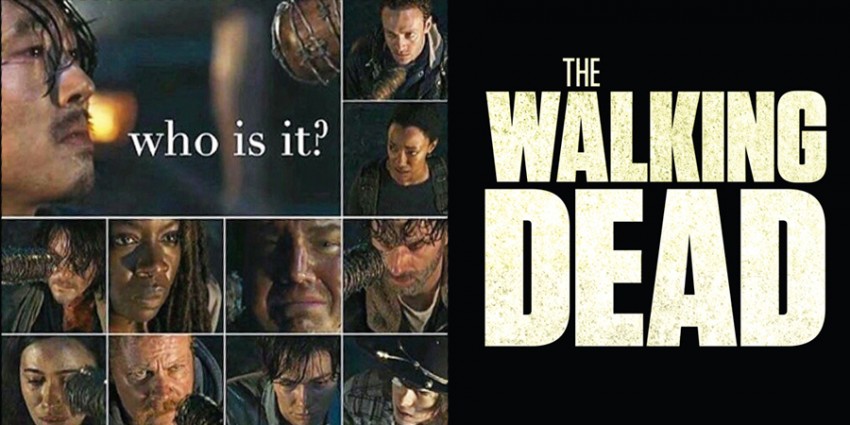 Well walker friends, we find ourselves at a precipice here. Are you still holding on, or are you teetering at the edge? Maybe you just jumped, or fell off the ledge. Sunday night’s season 6 finale of The Walking Dead, Last Day on Earth, was indeed a cliff hanger! And it sucks!

I was all in. I was swept away by all of the hype, as I’m sure many of you were. The introduction of the baddest bad, Negan, came through with all the fanfare of a dull thud. Although, Jeffrey Dean Morgan, pulled the character right out of the pages of the comic, scarier than all hell, without the foul language. He has now immortalized Negan, for all to see. And yet somehow, we are left wanting.

The entire episode built up to the last 11 minute fever pitch, of watching Negan come to life. And come to life he did. I sat dumbstruck and in awe, as I saw our once confident group, be reduced to sniffling, scared shitless, cowering blobs. The looks on their faces, were that of utter terror, as was mine. How about you? 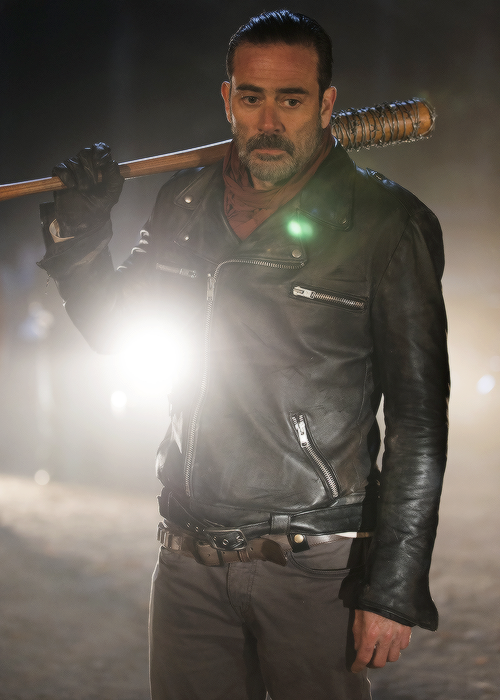 The episode started out slowly. We knew that the group had to get Maggie to the doctor at Hilltop. That much was a given. We saw that Alexandria was left in somewhat good hands. Baby Judith was left to the care of Father Gabriel, who has redeemed himself and is now as bad ass as anyone. Enid wanted to go along. She wanted to be by Maggie’s side and help her, but Carl put the skids to that, locking her in a closet, to keep her safe. Aaron was at first denied for going on the trip, but talked Rick into it, after telling him he would have to be punched and tied up again, to stop him. Spencer asked Rick, if the Saviors did come to Alexandria, were they to make a deal. Rick responded in kind that,”tell them to wait for me, I have a deal for them”! So started the trip to save Maggie.

All started fairly well until the first roadblock. Of course, the Saviors are on to them. They seem to have eyes all around. They are actively herding them in a certain direction. But more on that in a minute. 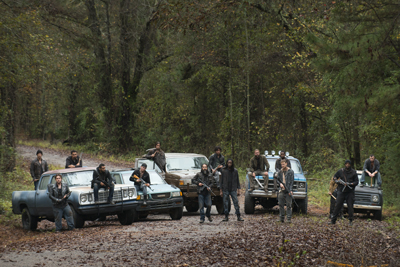 We have several scenes with Morgan and Carol. Morgan comes to find the horse that the armored man was looking for in the 615 episode. He gently talks to it, and gets up and rides. He is searching for Carol. he knows she must be injured. When he comes upon her, curled up in a ball on a porch, he sees that she has indeed suffered a bad injury. He gets her into the house and takes car of her wound. Morgan knows that she needs medical help. He informs her that he and Rick, came out searching for her. He tells her that Daryl took of on the bike and that Glenn, Michonne and Rosita also went out. He thinks they should all be back in Alexandria waiting, now. They banter back and forth. Carol explains that, if you love and care about people, you have to be prepared to fight and kill for them. I think that Morgan realizes his philosophy is what got Carol to this point. She is broken, and doesn’t want to do it anymore. She is so downtrodden here. She doesn’t want to go back to Alexandria. 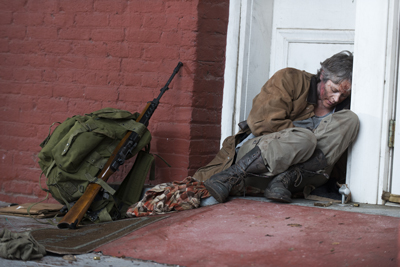 Morgan hears something and investigates outside. He find a walker, strung up from a TV tower, it is attracting other walkers. He climbs up and stabs it’s head, and cuts it down. When he returns to the house, he finds that Carol has taken off. He gets on the horse and goes searching once more. 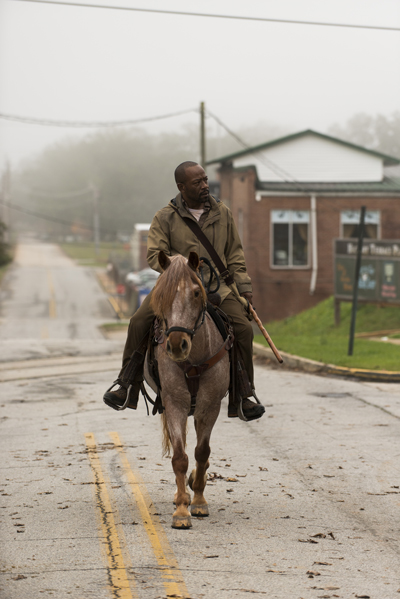 Carol almost get bitten by a walker, but manages to put it down. The surviving Savior has tracked her down. He decides he is dying, and wants to see her suffer also. He shoots her in the arm. It is clear that she doesn’t care about living anymore. He shoots her in the leg. Then she taunts him to finish it. When he decides that he will, Morgan steps up, and with the gun Rick gave him, unloads all the rounds into the Savior! 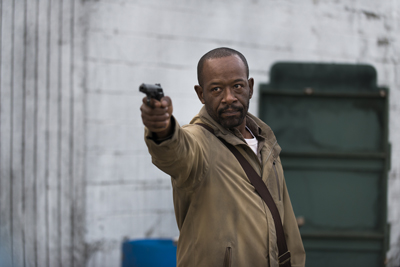 After the shooting, Morgan and Carol are approached by two, armor clad men. One of them is the guy Rick and Morgan came across in episode 615. The man says, ‘I see you found my horse, and Morgan replies that he also found his friend, meaning Carol. Morgan says she needs help, and the man agrees and says, ‘lets get her some’ and they shake hands. These people are from The Kingdom. We will be finding out about them in season 7. They are peaceful and will be great allies. 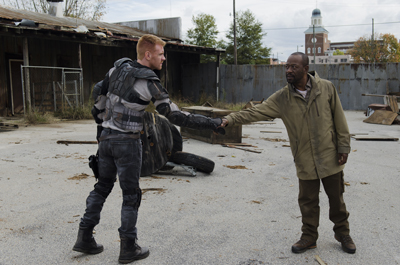 Now lets get back to Rick and the gang. Every time they try a new route to Hilltop, they are met with an ever growing bunch of Saviors! Maggie is getting worse and Rick is getting worried. At one point, Rick banters with a creep from the Saviors about their’ last day on earth’. The creep, says Rick better be nice and kind to all the people in the RV, as it could be anyone’s last day. At one ambush spot, The Saviors are beating and dragging around a man. Obviously, he is being punished for something. This disturbs our group. Another ambush is made of chained together walkers. The group finds that some of the walkers are wearing clothing belonging to Michonne and Daryl.  At another ambush stop, the Saviors hang the man from a bridge and have the road blocked by felled trees. They shoot at our group, but not to kill, just to herd. 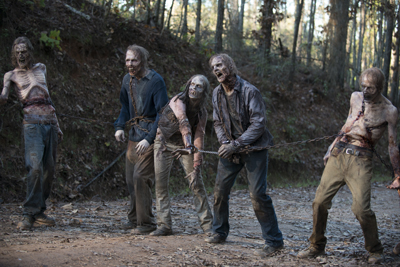 Rick and the group escape, but have run out of options. Eugene, gives the bullet recipe to Rick, and says a teary and heartfelt goodbye to Abe, and takes the RV, by himself down the road. He thinks that he will be a decoy, and the others can get away. The others, take Maggie on a stretcher and go through the woods to try and get to Hilltop. 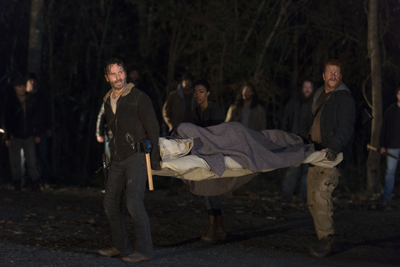 The last 11 minutes, go to hell in a hand basket, and take us with it! First the creepy ass whistling starts. It gets louder and louder. Our group is running now, with no place to go. Then bright lights are on, and we find our group surrounded by many, many Saviors. They are trapped! They are approached by Trevor, the creepy main Savior that Rick bantered with. They are, as Abe said, ‘up shit creek with their mouths open’! Their RV is there. Eugene has been captured as well. All of their weapons are confiscated. Negan is announced and comes out of the RV.  They are all made to kneel on the ground. Then Daryl, Glenn, Michonne and Rosita are brought out of the holding van. The group is screwed and I think they know it! The looks on all of their faces, in the next several minutes, is telling. Especially Rick!. Negan goes on with his speech, as calm as can be. Glenn loses his shit when he sees Maggie, but is brought down quickly. After his speech and the eenie, meenie, miney, mo part, he stops at one of our group and begins bashing in their head. The sound was hideous. The POV was from the victim, whomever that is. 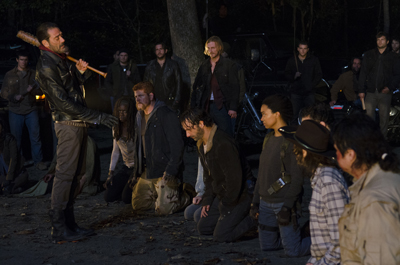 Now let me get to my opinion. I hate cliffhangers! After watching The Walking Dead since the start, I am PISSED about the finale. I am not alone here. At least 70% of fans are, disgusted, disheartened, degraded, depressed or simply delirious over the ending! Glenn dies in the comic, we all know that. But after the fake death/dumpster thing, I am sure it’s not him. AMC would be cutting their own fan base throat, if it is Glenn. We do know that is ISN’T Rick or Carl. Negans speech proves that. That leaves Eugene, Abe, Rosita, Michonne, Aaron, Daryl, Glenn, and Maggie. We know that Gimple and Kirkman, gave the lamest ass excuses about the finale. We know that NONE of the cast, knows who it is! Which leads me to believe that the writers themselves, are not sure who they want to kill! Since filming for season 7 doesn’t start till next month, we won’t even get any spoilers, until a certain person doesn’t show up for filming. AMC has really bit the big one here, in my opinion. To lead us up to this deadly character killing episode, and not give us an answer, is a slap in the face to die hard fans! The only thing good about the episode was JDM’s outstanding performance of Negan! I knew all along, he would be the perfect fit. I am going to LOVE to HATE him!

The acting in this episode was epic! Carol, Morgan and especially Rick. I have never seen, in 6 seasons, the pure look of terror on Andrew Lincoln’s face. The cast had me believing in this morbid, terroristic, last 11 minutes! I applaud you all!

Rant over. I am calm now. We have 6/7 months of waiting. The first episode of season 7 will give us the answer. Stay calm. Live your lives. I have an idea of who they killed. I won’t tell. Please give me some feedback here. #WhoIsIt ? 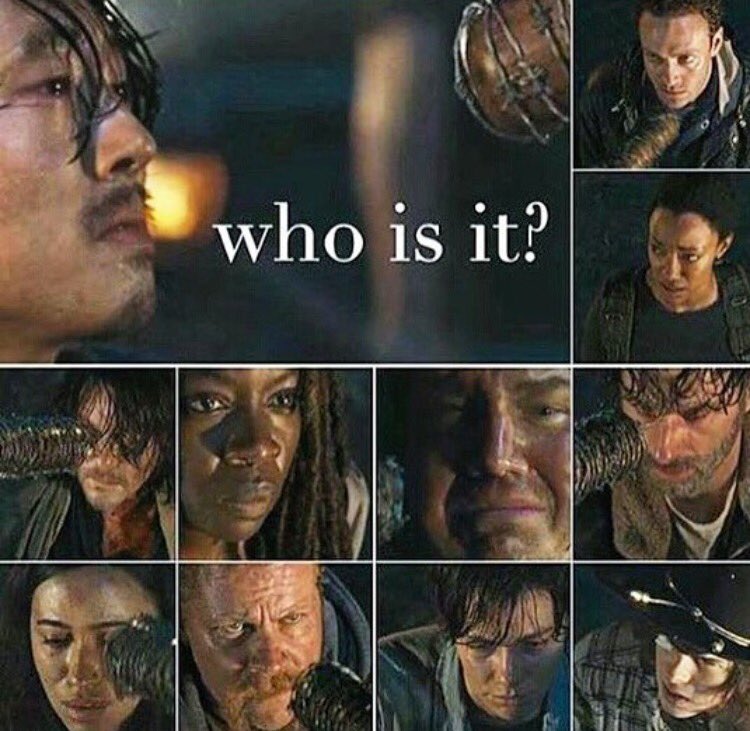