Disclaimer: I use Messenger and Monkey pretty interchangeably.

This week on 12 Monkeys, we get to see Cole and Cassie reunited as our familiar time traveling duo venture One Hundred Years (see what they did there?) into 2044’s past, to 1944. They’re hot on the heels of a pair of Messengers sent there to harass Thomas Crawford, someone figuring into the 12 Monkeys scheme in an as yet unidentified way. Things end on a pretty precarious note, but why start this review with the end of the episode? Let’s take a look inside…

Primary (or the Condition of Being Special)

Last week, the 12 Monkeys episode namers tossed me a softball and I totally whiffed. The name of the episode was Primary. I tuned into other keywords, like metamorphosis and purpose, and totally missed the significance of “Primary”. Jennifer was identified as Primary by Olivia, giving a name to the condition that makes her singularly important, but outwardly very crazy. Yes, her purpose was derived being Primary, but after watching this week’s episode, we see “Primary” is something that is going to stick with us and become central to the show’s mythology. This episode, we met another Primary individual: Thomas Crawford, Jr. If ever there was a character born to die, it was Tommy. Before he super-willingly gives himself up to his fate, he tries to explain to Cassie a little bit about being Primary. What do we know? Not a lot, except Tommy can also see through time (like Jennifer can seem to do). It’s a bummer he sounds much more practiced at it, given how pro-paradox he turns out to be. The business about keeping the, “lines straight, the circles circling,” as well as helping “it” think, all sound like Primaries are part of a greater, group-consciousness (guided by the Witness?), for whom time restricts only their physical bodies, but not their minds and senses. I’d like to see the “Primary” idea congeal into something more tangible by the end of the season. 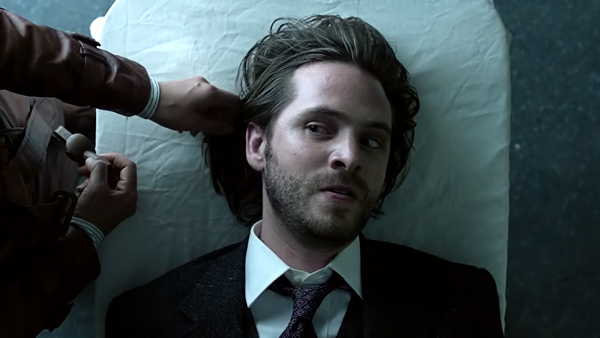 12 Monkeys 203 Review: Cole (Aaron Stanford) doesn’t like the looks of that Messenger’s ball-gag. Image by SyFy.

We don’t get a lot of why the Messengers / Army of the 12 Monkeys do what they do, but we do get to see what they wanted to do with the time machine this week. Given how reliable the information they have to work from is though, I have to wonder if the Army of the 12 Monkeys is working, and has always been working, in the same way as Jones and her compatriots (and boyfriend). If the Witness is the 12 Monkeys’ boss, and they were sent to kill the unfortunate Dr. Thomas Crawford by mistake, I bet the Witness exists in the future (at least 2044) and working from the same incomplete databases as Jones’ team. Both groups had the same bad intel leading them to Thomas Crawford, Sr., when Tommy Jr. was the Goines-ingly correct choice. What happens when they find Tommy? Just some totally normal time-travel stuff… Like being impaled by your own dug-up-in-the-future bone (carved into a knife) and exploding in a paradox. Happens all the time. These missions look like kamikaze, single-purpose trips to do specific, effed-up stuff, now that we have a taste of one.

Side-note: We’ve seen a few paradoxes and know no one survives being in close proximity to one, so my count of time-traveling Monkeys is down to four.

As a relatively new reviewer, I’m sure it’s in terrifically bad journalistic taste to point out something I had previously committed to virtual ink has turned out to be true, but what can I say? I have to point out in my article previewing this season, I thought Cassie bore Cole strong animosity about Aaron’s death. In this episode, she revealed that, yes, she is very bitter about how that went down and thinks Cole owes her a LOT for that. She still can’t let herself trust Cole, but he may not be as dead to her as she’d like him to be. If she was as hard as she thought she was, she would have taken the shot when Cole was a human shield for the escaping Messenger. We’ve seen her make multiple head shots from this distance. Worse comes to worst, she could have done the old “shoot the bad guy through a survivable gunshot wound location” trick we’ve seen elsewhere. If I ever become a doctor / action-hero like Cassie, I’ll pull that move CONSTANTLY. She’s not ready to give up on him as it turns out. Now that they are sure to wake up in FBI-guarded captivity minus their get-out-of-time-travel-jail free tethers, they will need to rely on each other quite a bit to get out of trouble. 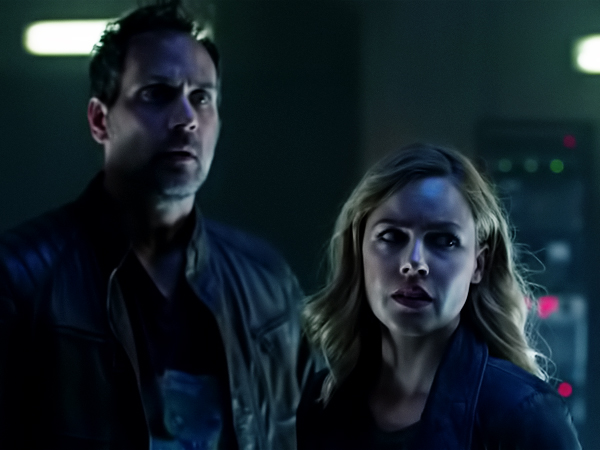 12 Monkeys 203 Review: Cassie and Deacon have grown closer during their time together in the future. Image by SyFy.

It’s not a perfect match, but this little exchange of words had a Han and Leia from The Empire Strikes Back vibe for me. Are Deacon and Cassie a couple? Cassie is acting so guarded around Cole and Ramse, it’s hard to tell. Deacon is saying anything he can to get a rise out of Cole and Ramse, but this exchange was heard only by the viewer and meant only for Cassie. Attachment to another person doesn’t come easy for Deacon. Are we seeing just the affection of a mentor and student, after having gone through eight months of life-altering trials together? If you were Deacon and you had been there with Cassie, teaching her and going through tough, uncertain times, is that all YOU’D feel toward possibly the prettiest person left on the planet? That’s an easy one. The real question is how Cassie feels toward Deacon. I bet there’s something there. I bet she LIKE likes him.

Deacon’s role gets even more intertwined into the central story and mythology when he decides to correct the balance of power in the facility by giving Ramse a one-way trip to the woods. Wouldn’t you know it, but he takes Ramse to the Red Forest? What’s the Red Forest? We don’t know yet, but it shows up in the visions of Primaries (and Cassie…. Wait a sec), AND if the sky starts imploding around you while visiting, you need to run as fast as you can away from there. Heck, take that as a life lesson you can apply anywhere, not just the Red Forest. We got glimpses of the Red Forest last season and now we see close up how the forest actually turns red in a progression that seemed to chase Deacon’s vehicle. Do I think Deacon is central or special to the larger story? Not exactly. Like Jones said, he’s a necessary evil. But he might be Cassie’s secret-boyfriend.

While we wait a week to see how Cole and Cassie get out of trouble, I’ll leave you with one thing that should bring a smile to your face, no matter what’s going wrong. A picture of Michael Hogan, in full plumage, flirting his brains out with Dr. Jones : 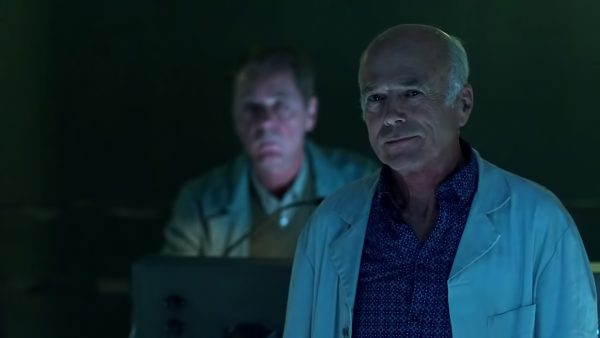