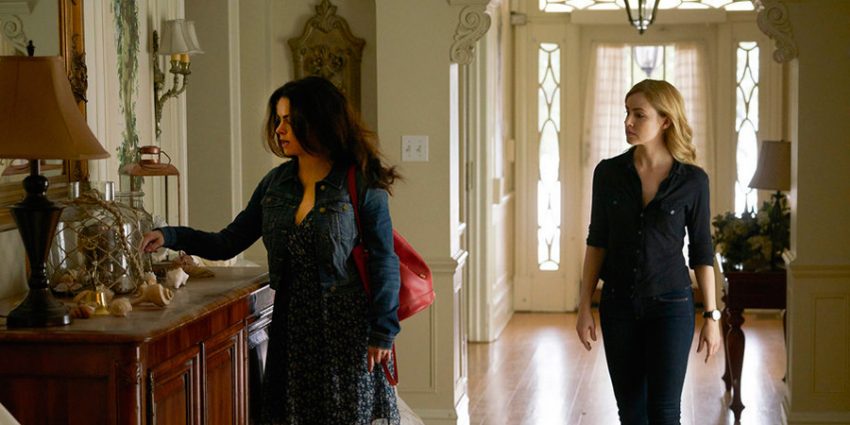 The breath-catching I asked for last week was partially granted in this week’s episode. We got to see a little bit of our old Cassie, a lot of a more empathetic Jennifer, and side of Deacon you would never want to see in person. Plus, I have a theory on who the Witness is.

Previous guesses about the Witness being a current cast member, existing in the future have been, shall we say, put on hold. The Witness is clearly a house, residing in another plane of existence that uses its inside walls as a graffiti-style etch-a-sketch to communicate with the acid-tripping elite of the Army of the 12 Monkeys. It’s just as simple as that, no fuss, no muss. Just a sentient house.

I’m going to need a little more than that, I’m afraid. Is this a poltergeist situation? Maybe a reinterpreted Domovoi? Those supernatural situations are usually between the people living in a house and the spirit co-habitating with them. If that’s the intent, you could extrapolate that the house is really home to the the spirit of the Earth and that its plan to wipe out everything is derived from its dissatisfaction with the way the house (The Earth in this case) been treated. That would be in keeping with the Domovoi tradition (Russian or Slavic house spirits that play tricks on you if you keep a messy house), but… I sure wouldn’t want all this awesome storytelling to be a PSA for recycling. Please, Terry Matalas, don’t let that be what’s Happening (see what I did there?). Would the Earth be as upset about how man treats its fellow man? I doubt it would get all genocidal about it, but then I’m more of an indoorsman and don’t really know the Earth that well.

I think a better guess is that the house is just a representation the Witness uses to communicate with people because they’d have no hope of understanding him otherwise. Think of an intermediary or translator. What does that make the Witness? Possible candidate: Time itself. Last week, the mythology of the show expanded in a way that personified Time to have characteristics like a living thing. It’s starting to look like personified Time has gone suicidal and has put a noose around its own neck, while using the Army of the 12 Monkeys to kick out the little stool it’s standing on. Think about it. If Time spoke to you, would you have any chance of understanding it directly? Doubtful. Would Time make a pretty credible all-seeing, all-knowing “other”? Since I’m not counting actual deities here, I can think of nothing more credible than personified Time would be. If I’m right, how do we go about cheering up Time? It’s not like Time can take… time-off! Hilarious.

All of that makes it sound like I didn’t notice Aaron showing up in Cassie’s vision quest with the Witness. That’s not true, I just don’t think Aaron is The Witness. 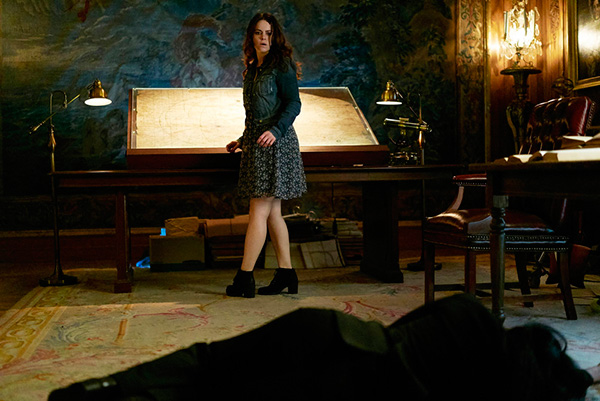 Future Jennifer had an interesting revelation that only sounds partially true: Primary-ness fades as the Primary ages. This is the reason she offers as to why Cassie must go back and team up with 2016 Jennifer. I have serious doubts about how much her powers have diminished. I wonder how long the Daughters would hold on to a prophet that can’t prophesize any more. Maybe it’s an honorary, emeritus type position since she got them through the worst of the plague and all. Manipulating things to position Cassie when and where she’s needed seem more likely to me.

The Mary Tyler Moore theme song as interpreted by Joan Jett opened this week’s interaction with a much peppier and happy looking 2016 Jennifer Goines. Sure, she needed her meds and the Blackhearts to drown out the voices and live a normal life, but who doesn’t? One of the things the meds weren’t helping with was her Kevin Garvey-esque lingering apparition of her dead mother. All-in-all though, Jennifer has made a LOT of progress from the committed wacko we met last season. She’s still wacko, but she really wants to be normal. More than anything, I gained an appreciation for Jennifer as a fighter that I didn’t have prior to this episode.

Cassie started down the road to blending what she became under the tutelage of Deacon and Jones with the humanitarian Cole met last season. She gave Cole a way back into her life: through life-saving time-traveling heroics. (Easy-peasy). She found empathy for Jennifer’s condition: Seeing the poor woman continually break down and still pick herself up and try to be a good person gave her a new respect for how complex Jennifer really is. While seeing Jennifer try to deal with all this helped break down Cassie’s paradigm of Jennifer as raving world-killer, initially Cassie still saw her as a means to an end. Cassie changed her tune after being at the mercy of Olivia’s creepy bath time and Jennifer, Joan Jett, and Mary Tyler Moore intervene to save her. Good thing she didn’t go through with shooting Jennifer that one time. Or those other times. I think we’ll see something resembling season one Cassie from now on. There’s still the Deacon angle to consider… but not this week. 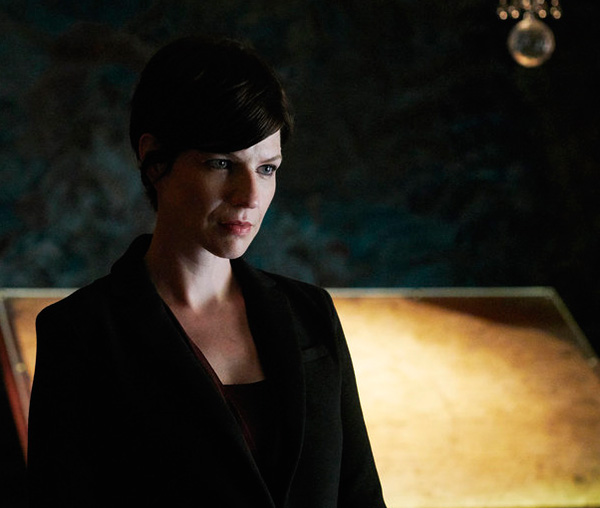 12 Monkeys 205 Review. Olivia trying to keep track of all the stuff she hates and wants to destroy. Image by SyFy.

So far we’ve seen the Witness act a lot like a mafia boss. He’s hard to get to, he deals directly with only a few subordinates, and he doesn’t ask you to do something. He tells. If you swap out the Witness for Tony Soprano and then re-create the situation he had with Olivia, is it any wonder that when she took advantage of all the rope given to her, he let her swing? Olivia engages with The Witness to open the show and he tells her to find Cassie. She loses sight of the “no one questions The Witness” policy and when she comes back from the meeting somewhat worse for wear, the Pallid Man correctly assumes that Olivia just made The Witness’ naughty list. Although Olivia effectively implemented most of the Witness’ plan for world / time destruction, she lost his confidence with questioning his orders and those unauthorized side ventures related to Jennifer earlier this season. Did she think he wouldn’t see what she was doing? Seeing EVERYTHING is implied by his name! It’s not “The Witness Limited to a Confined Area”! If I were to ever trip the light fantastic and a hallucinated house starts predicting the future and bossing me around, I don’t think I’d ever have the guts to try and pull a fast one on it. Olivia was braver than me on that count. She’s also deader than me thanks to mishandling Cassie and Jennifer PLUS an ambitiously opportunistic Pallid Man ready to take advantage of her weakness. So much for Olivia. She creeped me out anyway.

The Foreman’s old grudge against Deacon was just the excuse Cole and Ramse were needing to try and “rebalance” who holds the power at the time travel facility. I bet Deacon routinely shoots his own guys in the face like he did to poor Clem. This time though, there was a boogeyman named the Foreman looming they could use to justify to themselves into making a move to permanently remove Deacon. In the future, if I am ever the leader of a marauding horde and decide to rebrand myself, you have my promise I will do better than, “The Foreman.” Were “The Manager” and ” The Supervisor” already taken? Did he call his best goon something like, “The Direct Report”? Anyway, Cole and Ramse made a dangerous play by trying to employ the Foreman to take out Deacon. Although he claims to respect them more for having made the move and getting as far as they did with it, I question whether that respect translates into a mutual non-aggression pact. After seeing Deacon walk out from an un-walk-out-able situation, Cole and Ramse might want to sleep with one eye open. For the rest of their lives.

Next week, there has to be some fallout from Cole and Ramse’s Deacon gambit. Also, now that the Pallid Man is the Witness’ man on the ground, I bet the 12 Monkeys organization becomes more aggressive.

“Human sacrifice. Dogs and cats, living together. Mass hysteria!” – Future Jennifer quotes the original (weird I have to say that) Ghostbusters‘ Peter Venkman.

“She’s got the touch, she’s got the power!” – Jennifer reinterpreting the victory theme from The Transformers: The Movie, casting her younger self as heir apparent to the Matrix of Leadership.

Dr. Eckland continues his slow, methodical drilling into Dr. Jones’ icy heart. This week, he pulled out this smile. Dr. Jones doesn’t have a frakking chance. 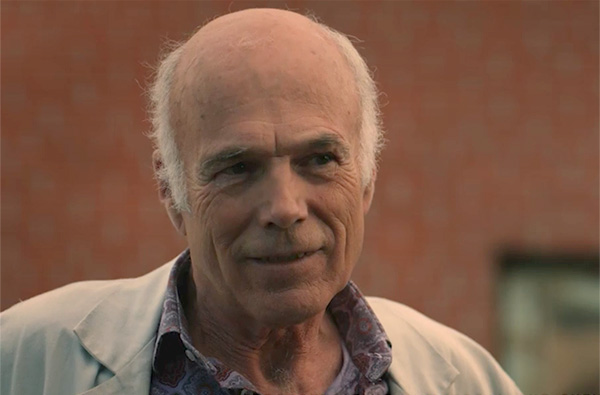