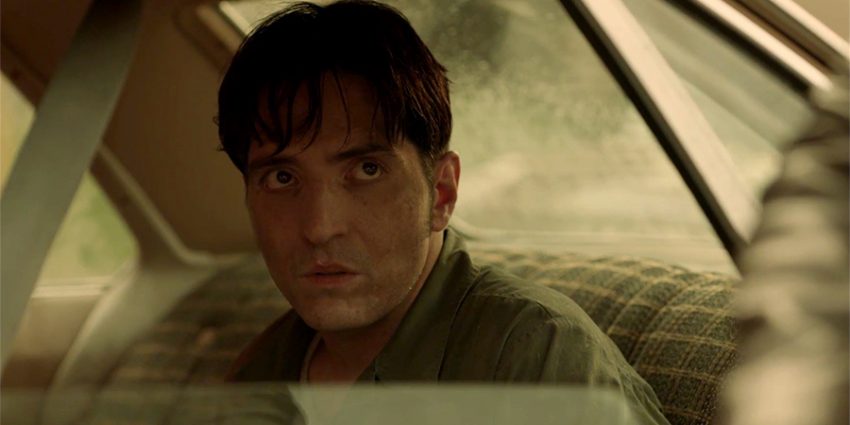 This week, Cole and the gang got down with the spirit of the boogie in 1975 to locate Kyle Slade. Slade was the Primary mentioned in last week’s episode and along with a warning about his dangerous nature. With Cassie babysitting Jennifer back in 2016, it’s up to Cole and Ramse to protect Slade from his upcoming date with a Monkey-aided paradox.

It seems the HR department back at Primary HQ is getting very lax about their standards. The Primaries we’ve met so far, Jennifer and Tommy, are definitely crazy, but not in the “danger to others” kind of way Kyle Slade is. His backstory included three tours in Vietnam and a stay in a POW camp (remember, this is 1975) that ended in a dishonorable discharge of the Section 8 variety. If you’ve never watched M*A*S*H, you may not know Section 8 as being code for too crazy to keep in the army. He tried the classic, “voices from the jungle told me to go machete-happy with my Vietcong captors,” defense, but it didn’t hold up and the army cut him loose for the rest of us to deal with.

Since making it back from ‘Nam, he became a serial killer prone to hacking victims into unrecognizable bits. For time-traveling Messengers and our heroes, he has conveniently left his final victim in good enough shape to be identifiable. Both parties were then able to track down Slade, going by the nickname “The Immortal” in 1975, through that final victim, the single-mother and cocaine-addicted, Victoria Mason. Things got complicated when Cole intervened before Slade could murder or abduct Victoria. Cole and Ramse have killed a lot of people in their time-travelling adventures, but time-quakes like the one experienced here only seem to happen when they find someone pre-ordained to die and let them live. Gotta wonder where Victoria Mason or her son may come back into the timeline now, I suppose. 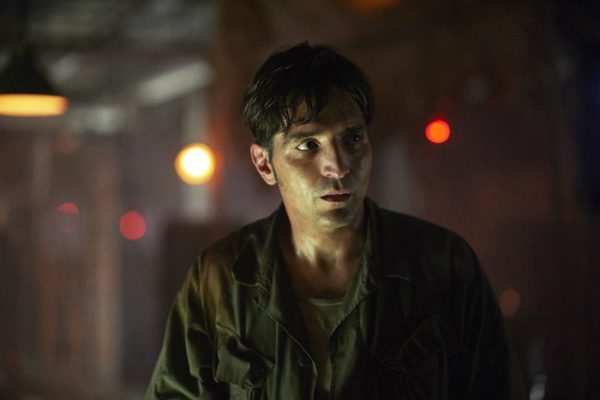 There were some hostage-taking and police misleading misadventures, but at some point, Cole and Slade headed back to Slade’s evil lair because Slade believed he’d captured The Witness. Cole was game to visit Slade’s place because he believed taking The Witness off the board would probably fix everything. Along the way, Slade spills some half-truth, half-insane details we’ve come to expect from Primaries, such as: the people he’s butchered had also been able to hear voices and that The Witness forced him to kill them. Perhaps the butchering part was Slade taking the initiative and going for style points with the boss. The justification contradicts itself though as he tells Cole they were killed preemptively, at the “Witness’s” request to tear down the “house of cards” (time existing with the help of Primaries) and to prevent paradoxes (which is how the Witness has been going about destroying time thus far). This was probably when over-eager (all leap, no look) Cole started to think he may not have been dealing with the actual Witness.

Back at Slade’s crib we found a cross between the grossest parts of Se7en and Silence of the Lambs, complete with body parts and an abductee wearing a mask sewn together from scraps of flesh. Given Slade’s proclivities, I am starting to wonder about whether or not primaries are meant to be interchangeable or if they fit into certain roles. We already know that being able to draw a screaming monkey face from memory is a requirement for primaries, but are there specific job requirements being filled by different primaries? We should meet at least one more primary before the end of the season. Maybe that interaction can shed some light on the whole Primary thing without them being killed before the end of the episode.

Cole and Ramse had their ups and downs this episode, but once again, Ramse’s unwavering loyalty to Cole helps Cole survive the episode while bringing Ramse closer to redemption. There’s actually a point where Ramse’s son from the future gave him the “needs of the many outweigh the needs of the few,” speech in an attempt help let Ramse off the gigantic hook he put himself on last season. I felt like this was one of those moments when the writers were trying to address the audience directly regarding Ramse, his motivations, and how he’ll act in the future. If the son he’s trying to save gives him permission to save the world rather than just himself, who is he to do anything else?

The whole “all leap, no look,” bit felt forced and a convenient way to add some conflict to their improving, but uneasy alliance. Ramse has done plenty of look-free leaping in his day and his admonitions ring hollow to me.

Ultimately, their plot line followed along the likes of just about any buddy cop show with each others’ backsides being saved and the bad guys getting obliterated. Again, more questions come up about Primary people and their importance. Clearly, paradoxing them helps destroy time and expands the red forest. How can just plain old killing them be a whole lot better for the machinations of time? In this case, a recession of the red forest’s progress was clear when Cole and Ramse returned to 2044, but was that the only change? In a way, this Primary (Slade) was more valuable dead than alive and Cole was obliged to deliver sentence. 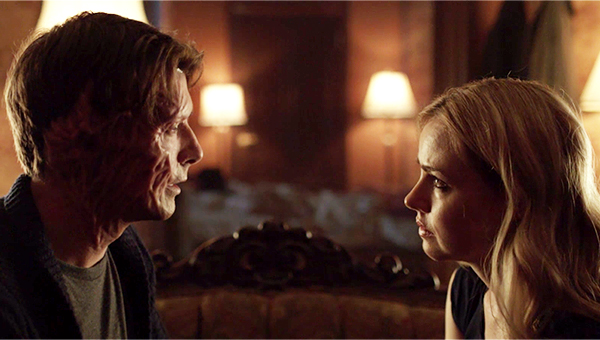 12 Monkeys 206 Review: Cassie and The Witness having a pleasant chat about ending everything. Image by SyFy.

In last week’s review I presented an idea about a suicidal, personified Time being The Witness. I also, very succinctly, stated my opinion that The Witness was not Aaron. So far, I’m half right.

I also explored the idea that The Witness takes recognizable forms to communicate with people on a level they can understand. For the Army of the 12 Monkeys, The Witness used a house in the Red Forest. Now we know the Witness can do more than that and doesn’t necessarily need Olivia or Future Jennifer’s special tea to initiate contact. It’s like The Witness has an agenda and if you happen to be someone he needs to use, he shows you what you need to see in order to be convinced. The Army of the 12 Monkeys needed to see this promised land of the timeless, deathless red forest in order to be convinced, With Cassie, The Witness thought his best shot to convince her was by taking Aaron’s form.

The whole conversation felt like a sales pitch or a serpent in the Garden of Eden kind of thing. Cassie proves to be a hard sell on the whole premise that everything would be better if there wasn’t such a thing as “time” anymore, and the Witness otherwise known as not-Aaron lost control of the illusion for a second. “Wait a tick,” Cassie thought. “Aaron couldn’t turn his eyes entirely black before he burned to death!” Can’t fool her. The witness took off and left Cassie needing Jennifer to take care of her, reversing their roles from the beginning of the episode.

At this point, I’ll stand by my idea about The Witness’ identity. Being proven half right was plenty of fuel to think I’m headed in the right direction here.

This was a fun and gratifying episode, but I don’t feel much closer to the major story arc than I did last week. Without another Primary name to search for, I think we may be digging deeper into the Witness and what he wants with Cassie (and hopefully why her eyes tuned completely black).