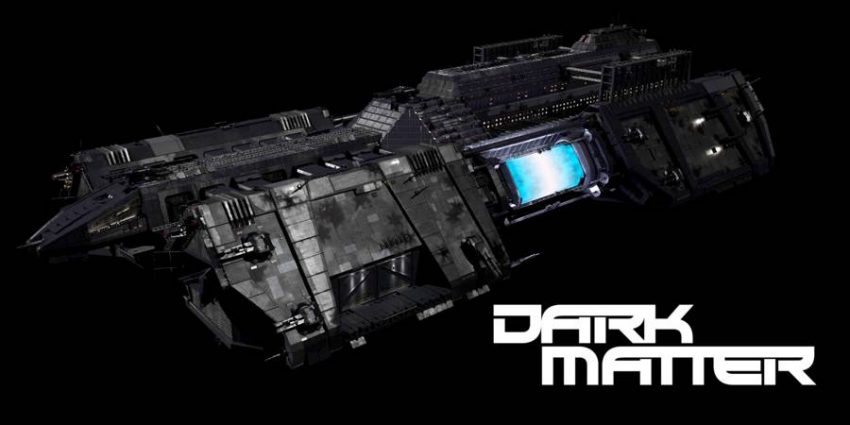 I know I skipped a week.  I may or may not have been detained at Hyperion-8; that’s classified information.  Thanks for waiting.  While production has wrapped, there’s still a lot going on, not the least of which is the release of a TRAILER that Erin (Follow her on Twitter at @ErinConrad2) graciously shared for me while I was away.  You really need to watch it and keep your hands on the Pause button for some quick shots.  Joe has a breakdown of it on his blog and I’ll be offering my own soon here at Three If By Space.

But for now I want to catch you up on the last 2 weeks in the world of Dark Matter!  Almost every entry includes bonus behind-the-scenes pictures and there seems to be an endless supply of them.  I’m pretty damned okay with that.  Also, the food pictures make me gain weight just looking at them.  I’m okay with that, too.  To get every BTS picture that’s released, follow Joe’s dedicated Dark Matter Twitter account, @DarkMatter_show and you won’t miss a single snap!

Today was a day of celebration at the Dark Matter season 2 wrap party!  After all that hard work, it was time to let off a little steam, have a few drinks, and say some bittersweet goodbyes.  Click on over for a photo diary of the evening’s revelry.

This was the last day of shooting for season 2.  The second unit wrapped up the last bits of episode 213: But First, We Save the Galaxy.  Cool title, right?  Regular readers know the fans voted on that title.  We voted on every season 2 title!

Today, we looked back at that awesome Android fight scene in the season 1 premiere.  There are 3 videos showcasing the fight and how it was choreographed by stunt coordinator John Stead.

I’m pretty sure THREE and FOUR are made by Timex, because in the pictures shown at the link, these guys took a licking and kept on ticking.  I guess prison life disagrees with them?  There were more BTS pictures like the one below. 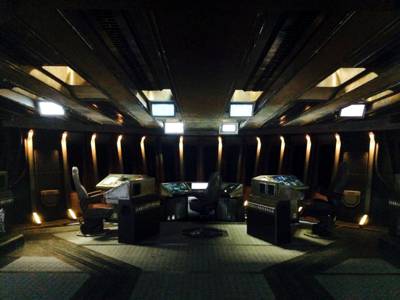 Dark Matter is a huge hit around the world and today Joe was on a conference call with about 40 members of the Syfy International team.  It’s great to hear that a big chunk of the planet is as excited about season 2 as we are!

Season 2 doesn’t start until July 1, but today was definitely a #SyfyFriday with the release of the season 2 trailer!  Smart readers who click the link will get to read Joe’s analysis of the long-awaited promo.  Patient readers can read my own breakdown shortly.  Just stay tuned, it will be soon.

Saturday was a goodbye dinner with Jodelle Ferland and her sister Marisha.  Good food was served and thoughtful gifts were exchanged.  But the most interesting tidbit for this Dark Matter fan is the revelation of what might be FIVE’s real name!  The link will show you the entry that includes a video mug shot of the Raza’s youngest crew member before she was FIVE. 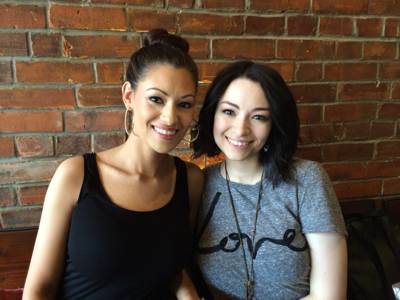 Brace yourselves, because the pictures at today’s link are almost guaranteed to make you hungry.  There are so many beautiful pictures of delicious food I ended up gnawing on the corner of my monitor.  But there are also a lot more BTS pictures, with one confirming Wil Wheaton’s Alexander Rook and His Evil Beard of Evil will be back.

Today, there was talk of season 3 and Star Trek!  Check out the cool Trek-themed 50th anniversary stamps Joe bought.  There’s a picture of the original crew that I strongly suspect has been photoshopped.  Take a look and help me decide.  While you’re there, you’ll also get some extra Stargate pictures.

Come on down to Joe’s Ship Shop!  Tuesday was all about celebrating the beautiful ships used on the show, with both stills and animations of many of the ones you saw in season 1.  The entry ended with some new designs coming in season 2, including a Mystery Freighter.  That sounds a lot like a board game my sister used to play when we were kids, or maybe I’m just losing my mind.  Or both.  It’s probably both. 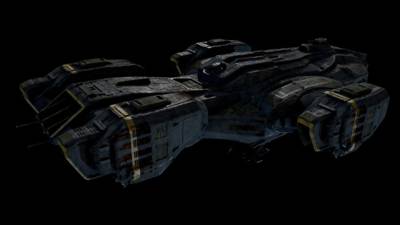 The most badass bulldog of a ship in the galaxy – The Raza! (Image courtesy Joseph Mallozzi/Prodigy Pictures)

The gears in Joe’s head never stop turning.  He’s just finished production on season 2 and he’s already come up with an idea for a new show!  Without giving us any real idea what the show is about, Joe tasked readers with thinking up ideas for a title.  Talk about a shot in the Dark (Matter)!

As preparations for the move back to Vancouver begin, the in-flight film will be All Dogs Go On A Diet.  Lulu and Bubba have to trim down a bit to reach their flying weight.  They really must’ve loved the food in Toronto.  Judging by the pictures I’ve seen, I’d enjoy the food, too.  And yes, the incredibly delicious-looking food snaps continue.  I think I need to go on a diet.

Today was another farewell dinner – this time with Melissa O’Neil who plays TWO, the Raza’s de-facto bad-ass commander.  I gained 5 pounds just looking at the food photos in this entry. 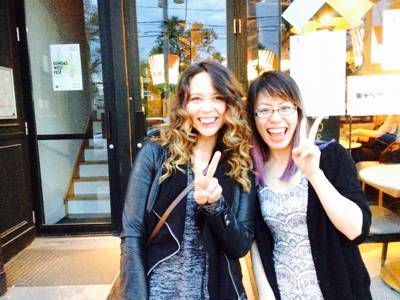 Melissa and Akemi are all smiles while out on the town! (Image courtesy Joseph Mallozzi)

Today’s entry was short, but sweet.  It consisted of 3 videos wherein testing of certain systems were performed.  My favorite is the decontamination test; apparently it’s best if you close your eyes.  That decon mist is a real blast!

Thanks for bearing with me as I did my best to catch you up on the past 2 weeks behind the scenes of Dark Matter.  We’re just a little over a month away from the season 2 premiere and then the real fun begins!