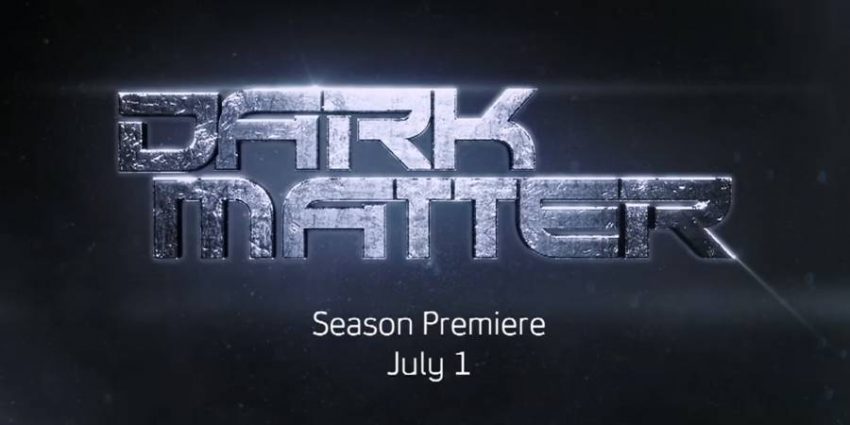 I have the worst luck.  I had been waiting for a Dark Matter season 2 trailer and of course it hits while I’m out of the country.  If you haven’t seen it yet, my co-conspirator Erin (@ErinConrad2) generously helped me out and posted it here.

I’m a little late to the party, but I’d like to offer my own breakdown of the rapid-fire scenes.  Joseph Mallozzi, the man behind the Dark Matter curtain, has already posted his analysis of the trailer on his blog, which I highly recommend you read.  But remember, Joe’s got the inside-est track of all the inside tracks, whereas I know only what he shares on his blog.  Which, by the way, is plenty, but nothing near what he knows.  So, sit back and enjoy my mostly uninformed and almost completely thought-free impressions.  I’m certain I’ve gotten most of this horribly wrong, but it’s still fun to speculate.

I know the images are small, but as you read along, you can click on the images in the post for larger versions.  Those big guys will give you all the juicy details, and you don’t want to miss any details! 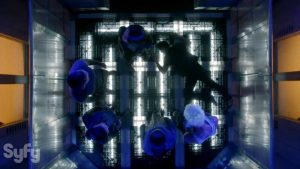 The rapid-fire trailer opens with this overhead shot of what I’m guessing is a prison decontamination chamber or initial holding room.  It’s hard to tell exactly who’s in there, but it definitely looks like TWO, THREE, & FOUR.  The next shot where FOUR says, “What happened to us?” has the same 3 so I’m sticking with that.  There are a few new faces, but this is prison so there’s bound to be a lot of new people around. 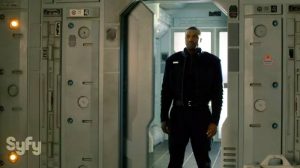 Well, now.  Being a traitor apparently comes with a clothing stipend.  Check out SIX in his big, bad uniform.  My fan brain is exploding from the inside right now trying to figure out what exactly is going on.  I can’t accept that SIX could be a stone-cold traitor, especially after seeing his softer side many times in season 1. 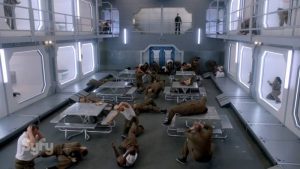 A shot of the prison cells and a common area, fully lit and populated.  All the inmates are writhing in pain and holding their heads almost as if some kind of sonic device were being used.  Or maybe the PA system is just playing MMMBop on a constant loop.   Talk about cruel and unusual punishment. 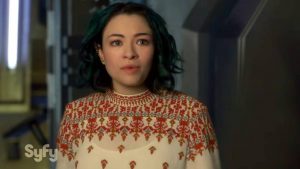 FIVE says, “With those memories you’re different people!”  Hmm, what memories could she be referring to?  Is it the crew’s original memories, or are they being implanted with false/fabricated ones?  One thing’s for sure, there’s memory manipulation going on and that’s never good.  At least I don’t think it’s good, I really can’t remember.

The shot of stasis pods that immediately follows has my conspiratorial brain thinking maybe this is some Dollhouse-esque operation.  Maybe someone’s implanting people with customized memories in order to have them fulfill certain missions then erasing them when they’re done.  Maybe they’re even using the cloning tech from Transfer Transit to keep the originals intact.  Maybe.

I’m always suspicious of Wil Wheaton and his Evil Beard of Evil over at Dwarf Star Technologies.  He’s my first pick as the bad guy behind this and it’s all because of the beard. 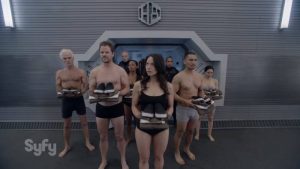 Hey, this is a pants-free prison! (Image courtesy Syfy)

No prison sequence would be complete without a shot of newbies in their underwear, prison garb in hand.  It also further confirms that we’re only seeing TWO, THREE, & FOUR in prison; well, as inmates at least.  We’ve already seen how SIX rolls at Hyperion-8.

Oh, didja ever notice the logo for Hyperion-8 is “H8”?  I guess there’s a lot of hate in prison. 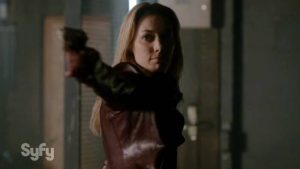 Here’s a VERY different look for Android.  Couple this with the shot where she appears to have her head connected to a machine that’s causing her some discomfort and I’d say she might be getting a memory makeover, too.  Nice hair, Android! 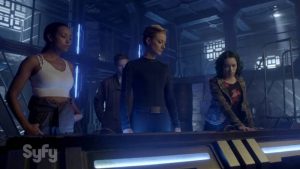 This is an interesting shot because there are 2 new faces in what looks like the Raza’s cargo area.  Regular readers of Joe’s blog will probably recognize Melanie Liburd to the left who will be playing Nyx.  And while his face is partially obscured, I’m pretty sure that’s Shaun Sipos who will be playing Devon, a “surgeon with a dark past”.

At least now the ship has a doctor.  Maybe he’ll be crotchety, but lovable like Star Trek’s Leonard “Bones” McCoy.  I can see him running around shouting, “Dammit, TWO. I’m a doctor, not a mechanic!” and “He’s dead, TWO!”  Also, lots of disparaging remarks about how Android doesn’t understand emotions even though old “Doc” secretly considers her a friend. 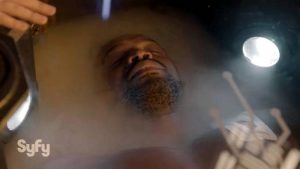 What is the meaning of this?  SIX is in a stasis pod here, but he was in uniform and looking very much in charge in an earlier shot.  Again, my conspiratorial side, which may be all my sides, is leaning toward some kind of cloning and memory implantation.  The problem is I know Joe Mallozzi’s writing well enough to know I’m very likely WAY off-base in most of my guesses.  That’s also part of what makes the show so much fun. 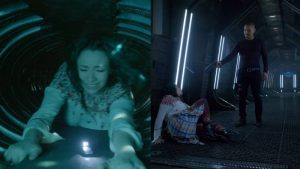 FOUR & FIVE have a spat … with a gun (Image courtesy Syfy)

These 2 shots indicate that FIVE, ever true to her nature, tries to hide in the ducts, but gets dragged out by FOUR.  What could compel him to do such a thing and then pull a gun on her?  Again, I’m chalking it up to memory manipulation.  And again, it could either be false memories or FOUR’s original memories which keep him from recognizing his new crew mate.

The next quick shot again shows FOUR with a weapon, only this time it’s his weapon of choice – a sword.  Oddly, it looks like he’s still in prison garb and possibly still in Hyperion-8.  It’s not every day you see a sword fight in a space prison.  Hell, where do you get katanas in a prison, space or otherwise? 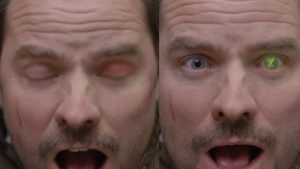 Here’s another interesting and unexpected twist.  THREE’s eye looks like it’s either been heavily modified or replaced altogether with a mechanical/biomechanical one.  The quick shot before he opens his eye clearly shows redness in his left eyelid.  Maybe it’s designed to help increase his shooting accuracy.  I know I wouldn’t say no to a Cool Cyborg Aiming Eye, especially if it was free.  Those things are damned expensive and you probably have to charge it every night when you go to bed. 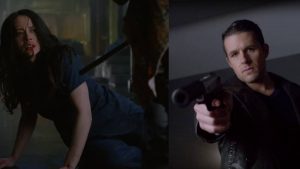 Can’t we all just get along? (Image courtesy Syfy)

The last 2 shots are as curious as the rest.  In one, TWO lies bloodied and beaten while someone stands over her.  While we don’t see much of the person doing the beating, it kind of almost looks like it could be FIVE maybe after having her memories messed with.  Or perhaps it’s new character Nyx?  We should know soon enough.

Then there’s ONE with a gun.  There’s nothing odd about him having a gun, but in this shot he just doesn’t look himself.  For one, his hair is different.  Our ONE never uses that much product!  Then there’s the stone-cold killer look in his eyes, which is definitely not something you’d normally see in ONE.  Of course, there’s that pesky memory manipulation thing to consider again.

While the actual trailer really only lasted about 15 seconds, there’s a lot of meat on those bones.  Rapid-fire shots of all kind of interesting situations have done their job and whetted our appetites for Dark Matter’s second season even more.  Stay tuned to Three If By Space where we’ll keep you posted when any new information, trailers, photos, or news of any kind arises.