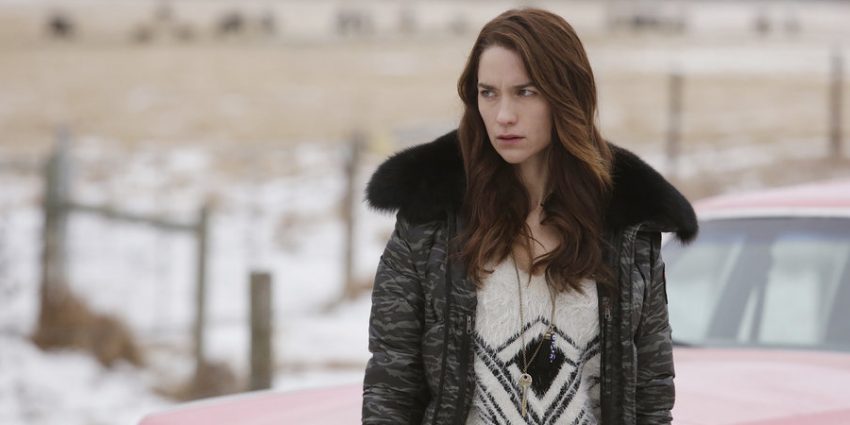 Wynonna Earp Episode 109 “Bury Me With My Guns On” Review

“Thing about an Earp, they are survivors to the core. Quick to recover, tenacious, committed to their cause. Thing about this Earp is she is all these things with demons for miles. She is also a distraction I can not afford right now, giving there is a witch that needs to get dead…” Doc spoke these words to open Friday’s episode of Wynonna Earp – Bury Me With My Guns On. Could not have been a better way to lead into this episode.

Wynonna is having a tough time dealing with what happened to her last week. It could easily be said that she is displaying symptoms of Post Traumatic Stress. She has been through so damn much and it is not so easy for her to know how to respond to what just happened. I mean she was kidnapped by that psycho wanna be doctor Reggie, and then almost became Jack the Ripper’s next victim. Who can blame a girl for being a little bit “broken”. From all the feelings dwelling deep inside her that feel like a spring coiled so tight, to her point of view of her own life, plus coping with the repercussions of fighting and sending the unholy seven that stormed the homestead and killed Willa back to hell… it is all a bit much. I am surprised she hasn’t completely lost her mind in it’s entirety. Even the Black Badge administration thinks she needs to be psychologically evaluated after the trauma she has endured. (If you want to know all that happens with that, sit down and watch the episode.)

I am truly enjoying watching the development of Wynonna Earp. The show has so many facets and each week we are taken on a journey that allows us the see the different sides of the characters. Every single revenant. Every connection to the Earp name. Every kiss. Every fight. It all matters. Somehow the amazing writers manage to keep the storylines fresh and very intense.

Speaking of intense, BoBo is back and boy he is back in a big way!

I teased in my preview write up for this episode that there would be issues resolved and new ones come to light. Thank BoBo Del Rey for this. He easily manipulates his way into and out of situations like a pro. Starting with the Stone witch, who he feels has betrayed him. She has lied about having the one thing that will allow the revenants to leave the Ghost River triangle. He learns this only after she shot up his men guarding the bones of her children, then stole their bones and performed the magic needed to piece one of them back together. His name is Drek and he has a face that only a mother could love. BoBo and his guys confront her at the bridge crossing the Ghost River county line. It is not a pretty sight. Bones are dumped on the ground. BoBo calls Constance a bad mommy. Drek makes an appearance to defend his mother. BoBo uses a bad ass flamethrower to torch the bones which not only destroys them, but Drek too. The Stone witch is so distraught, so grief stricken that Doc can feel her pain.

Rayisa Kondracki does such an amazing performance with all her scenes in the episode, she actually made me feel sorry for the Stone witch. Bravo!

Doc, who is helping Wynonna ‘blow off steam’ at the time, decides to act on this opportunity to get his vengeance on the witch. Wynonna begs him to think about it, not to act so fast. But before she realizes it, he is gone, on his way to find Constance. Doc makes his way to the bridge where he finds her in a puddle of her own tears. She begs him for help. He looks at her totally disgusted. BoBo, who decides to take advantage of this situation, comes out from the banks where he had been waiting for John Henry to arrive. Doc concludes he has been lured into a trap. Guns are drawn, words are slung and eventually Wynonna makes her way there to back up Doc. All involved come to a kind of a peace negotiation. In the blink of an eye, Doc flips and confronts BoBo about going back on his word to hand the Stone witch over to him. Not sure if BoBo is worried his ‘followers’ would rebel against him, or if he actually cares about his reputation and keeping his word when he makes promises, but BoBo hands the witch to Doc to do with her as he pleases.

After taking Constance to the homestead barn, Doc binds her with the silk the blacksmith gave him. Wynonna learns that the curse was placed on the Earp bloodline by her husband to exact revenge for Wyatt killing their sons. Her revenge of course was the deal she made with Doc knowing how it would break Wyatt’s heart. Then she put him in the well so Wyatt never had the chance to make things right with Doc. Cruel!! Eventually, in my favorite scene of the night, they bury her up to her neck in the salt beds. Issues Resolved.

I want to jump off course here for a brief moment. #WAYHAUGHT. #HAUGHTDAMN. Yes! Finally after all these weeks, Waverly and Nicole became canon!! For those who do not know what this means, it is simple to understand… canon is the material accepted as officially part of the story in an individual universe of that story. And it is a beautiful story indeed. The ups and downs of these two during this episode. The conversations, the misunderstandings, the moments in between. Waverly finally doing something that she wants for herself. I love, love that Waves made the first move! I bet Officer Haught was too!

Okay. The new issue brought to you by BoBo Del Rey… Our favorite revenant bought Shorty’s! My, oh my. What the hell?! I can not believe Gus sold the place. Though I am very disappointed that Shorty’s was sold, I am curious why BoBo felt it necessary to rip it out from under the sisters Earp. Is there something on the property that can help the revenants escape the triangle? Is BoBo just doing it for spite? I can not wait to find out the answers.