A couple of admissions: Last week, I assumed Ramse’s impromptu meetup with Cassie was also an abduction. Turns out, Jones has an open door policy for returning, disgruntled turncoats. Who knew? Also, after all of the bad stuff that happened to Olivia a couple episodes ago, I figured she was dead meat. Not so much. How exactly the deposed and recently crippled leader of a subversive death-cult finds critical medical care, I can’t say. Maybe if the new boss wants to keep you around just to rub your nose in it, the Army of the 12 Monkeys will spare no expense toward your recuperation. 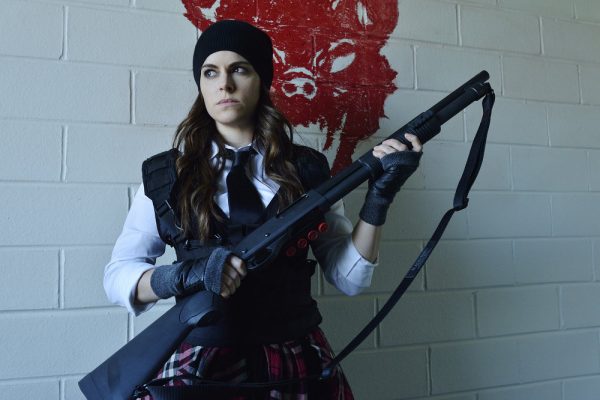 Jennifer and the Hyenas (Cole’s in there too)

If asked, I would have to pick the Harley Quinn-esque version we saw of Jennifer at the beginning of the episode, complete with poofy, plaid party-girl skirt, combat boots, and shotgun, as my absolute favorite version of her. Yes, there’s the sexiness aspect, but the cool, almost sane, confident part of her really draws me to Jennifer and Jennifer-centric episodes. Those parts of her personality are what she holds on to over the years as she becomes the figure known as “Mother” to the Daughters and they make her basically the best asset the time travel team has to figuring everything out. Being Primary and having lived through many of the pivotal events in the narrative allows Jennifer to give Cole (in this case) what he needs to know to survive and even learn some key info. Sure, she makes it a puzzle (Watch the hands, not the ball) for him solve at the critical moment, but that’s to be expected in a time travel story. What fun would it be if the wise-future version just told the hero everything?

Did anyone else in the 35 and up club notice the theme from the original 12 Monkeys movie sneak into the scene when James “Otter Eyes” Cole  sneaks into the Hyena’s hideout? If you don’t know, it’s the one that sounded like a pissed off accordion player getting experimental. Even though the TV show has been its own version of the story, I still hear that song in my head when I think of 12 Monkeys, so I’m glad it showed up here, with Jennifer and the Hyenas no less.

The Hyenas were Jennifer’s alpha version of the Daughters. Made up of escaped or liberated mental patients, they managed to destroy 6 or 7 Markridge plague labs. Although she effectively led the Hyenas for a short period, she still has a lot to learn before she got to the point where her followers would begin to call her Mother, like Hannah and the others in 2044. Like, maybe recruit a few non-mental patients. The success she had with the Hyenas shold have cost the Army of the 12 Monkeys some time and resources in the plan to ruin the world. That, plus the minor case of blown up-ed-ness suffered by Oliver Peters might create some kind time altering ripple like we saw earlier this season. The only reason why time wouldn’t change for the 2044 gang is if Alberts’ part in the narrative truly ended last season and he was never the person responsible for redeveloping the plague for the 12 Monkeys. Given the role Jennifer has played in the life of the plague so far, she could again become a focus of the Army of the 12 Monkeys’ attention. We’ve still got plenty of episodes this season for things to wrong for Modern-Day-Jennifer. 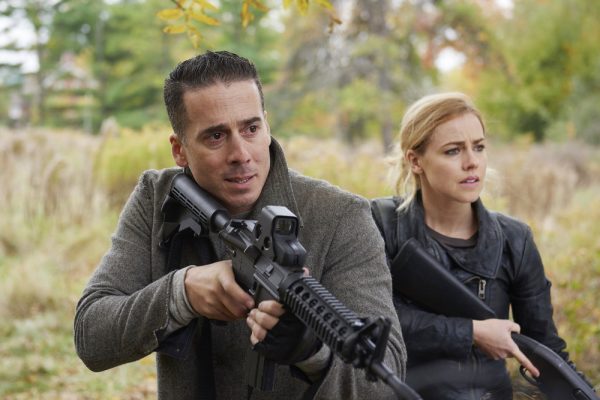 Embracing the idea that, “the enemy of my enemy is my friend,” Cassie and Ramse hop in the Humvee and set out to find The Keeper on the advice of the boss’s daughter, Hannah. From the Keeper, they hope to find out something more about, “Titan,” the place Cassie believes The Witness might be hanging out in 2044. On the way there they snipe at each other and eventually run across some grisly and ominous foreshadowing of what happens to liars when they run across The Keeper in the form of a couple beaten and bloody bodies hanging from a tree. How it is The Keeper coaxes them into his polygraph/torture chairs, we don’t get to see. For me to even believe it happened, I have to assume they didn’t want to hurt him, so they played nice and went along with his reindeer games. If I think too much about it, I’m all like, “You two had 2 people, 2 guns and weapons training from Deacon. How do you lose to a librarian?” But I chose not to overthink it.

For Cassie and Ramse’s sake, I’m glad the Keeper was more of 60s Batman-esque villain of the week kind of trap-maker rather than a fan of Jigsaw. His bizarre obsession with the truth makes him pretty dangerous to be around, but as a plot device, we got some pretty good information out of his interaction with Cassie and Ramse. For instance, these two hate each other. Not just dislike or prefer not to be around. H. A. T. E. Ramse’s reason makes him sound lie a little girl trying to understand playground politics: My friend likes you better than me. Well, betrayal will do that. Cassie’s reason though was more instructive to me because I had assumed incorrectly at the end of the first season about why she shot Ramse. What she said here set me straight.

I had assumed she shot Ramse because she blamed Cole for the death of Aaron and wanted to take Ramse away from him to even things up a bit. Not so much. Now, I think she shot Ramse for the reason she revealed tonight: Aaron allied himself with Ramse and the Monkeys over believing in her. I had the right idea, but the wrong suspect. The baggage I brought into the story made me want the pretty heroine to fall in love with the hero from the start, I think. By feeling that way, I don’t think I gave Cassie enough credit for how strong her feelings were for Aaron. Shame on me on that one. IF Cole and Cassie ever happen, it won’t be some cheap, “well, we’re the two leads so we have to love each other,” kind of thing we see all the time. We’re all going to have to earn it together.

Whoooo-boy! Can the Pallid Man take a beating or what? When the day comes that an otter-eyed hero from the future ever comes and tortures me, I hope to conduct myself half as well as he did. Maybe the Army of the 12 Monkeys has exercises meant to build up one’s tolerance to pain. Did anyone else notice the sequence of the beating? I’ve seen a few movies where torture is used to extract information and the sequence is usually 1. Ask some questions 2. Receive BS answers 3. Start beating 4. Receive better answers. My man Cole decided to skip around a little and start the beating process before the questions. Not unheard of, but further demonstration that although Cole can function like a normal person and want to save the world, he’s a world-class compartmentalizer when it comes to the necessary application of violence to a situation. Whether or not the information the Pallid Man gave up is true or helpful, (next Primary to be found in 1957) I bet we find out next week.

Also, what is the relationship between the Pallid Man and Olivia? They seem to despise one another, but then they use terms like, ” dear,” when referring to the other. They seem most like a divorced couple that still have a 50/50 interest in business being forced to work together for their own self-interests. The near-choking scene after Olivia says The Witness lies would fit nicely in that space, I feel.

It turns out, Hannah already had a mother and her name is Jennifer Goines. It’s pretty wild, but she calls her followers her, “daughters,” and they call her, “Mother”. Finding out what she accepted as her origin story was a fantasy has been a big shock for Hannah. There are a couple of bumps early on, including Hannah looking down on Jones’ life’s work and reason for existing, but by the end of the episode, she is asking Jones to learn more about her father and where she comes from. In a way, Jones’ strong, cold, business-like demeanor is exactly what Hannah needs to move past her initial apprehension. Jones basically lays her emotions out bare, in the straight-forward way she does with anything else and Hannah responded to it. Who knows? Maybe Mother Jennifer is constantly speaking in riddles and pop-culture references none of the daughters understand, so someone so plainspoken and direct was a very awesome fit for her.

Where to next week? I bet we keep the parties separated and head into 1957 Primary hunting mode as well as some version of Germany in search of Titan.

Extra Points – Jennifer says, “It’s like the A-Team with all Murdocks!” For those too young to care, Murdock was an insane character on an 80s show called, “The A-Team”. It was a show about a team four escaped military convicts who travel around righting wrongs with automatic weapons (that never seem to actually injure anyone…).

Also, Jennifer calls Hannah “Zeit”, which we all now know means “time” auf Deutsch. Remember my pet theory on the identity of the Witness being a personified version of Time? Well, I’d like to put in a sub-theory for this girl whose name is Time also.