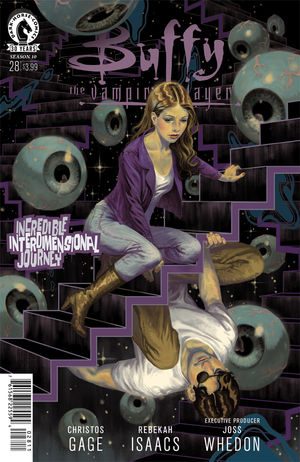 Spike is breaking up with Buffy. The army is breaking up with Willow. Giles is angry with fairies. Xander and Dawn are travelling through dimensions and Andrew is mostly angry with everyone. Is there any hope for the Scoobies to rally together to stop D’hoffryn from evil world domination? This review contains spoilers.

I have to apologize for not reviewing the last few comics, life annoyingly got in the way. But anyway, here I am ready to give you the low-down of issue 28.

At the end of issue 27 Spike suggested to Buffy that they should break up, which is where they start up in this issue, with Spike giving her a whole speech about how he thought being with her would sort him out, like she was some sort of magical cure to his messed up life. But she wasn’t and he knows he can’t give her normality.

But just when you think this is it for Spuffy, Buffy puts her foot down and refuses to talk about it. Instead she has an idea and drags Spike to a demon hangout, where she suggests something to the demon-dominatrix lady thing in charge. We don’t know what. As the leave she decides that now is the time to talk, and yes, she admits that they are having problems, and yes he can’t give her normal, but nor could Angel. Riley he could give her normality, but it still didn’t work out, so why not give it a go? Try a bit harder and fight a bit for love. Yay and hurrah!

Willow is having a major break up, not only with Army lady Lake but also with the actual army. And it is more of a dismissal as they tell her to go away this instant. It seems enabling D’hoffryns powers with the Vampyr book wasn’t a good thing to have on your CV when you are playing with the big guns in the army.

Andrew is angry. After being shown a vision by new-Johnathan of all his friends and his new lover dissing him. He goes to ask lover-boy Clive, “What is up with the hating?”. But of course naughty Johnathan (first male vengeance demon, don’tcha know) has only shown Andrew part of the conversations his friends were having about him, so he needn’t worry. His mates still love him and need him.

Willow, Giles, Spike and Buffy all end up at the apartment together and are looking sheepishly at each other. But as they all are a bit deflated and Buffy seem to have some sort of plan, which they all rally behind you get the feeling that Scoobie-power might not be dead after all!

Dawn and Xander are travelling from one place more bizarre than the other throughout the comic and as luck will have it fall into Buffy’s living room just as the other Scoobies have made up. Add an Andrew and a crazy collections of guns and the army is complete.

It is starting to be a thing with Buffy comics, the Scoobies fight evil, they grow stronger together, they fight with each other, grow weaker, they make up towards the end of the season and they kick the big bad’s bum. Well let’s hope this is the case here too. I am just so shocked and happy that they didn’t break Spuffy up. But with the fact that Spike now knows that he is with Buffy and not with some symbol of salvation which he had made her into, but a real person should be a start. Lets hope these two crazy kids lasts  a bit longer.