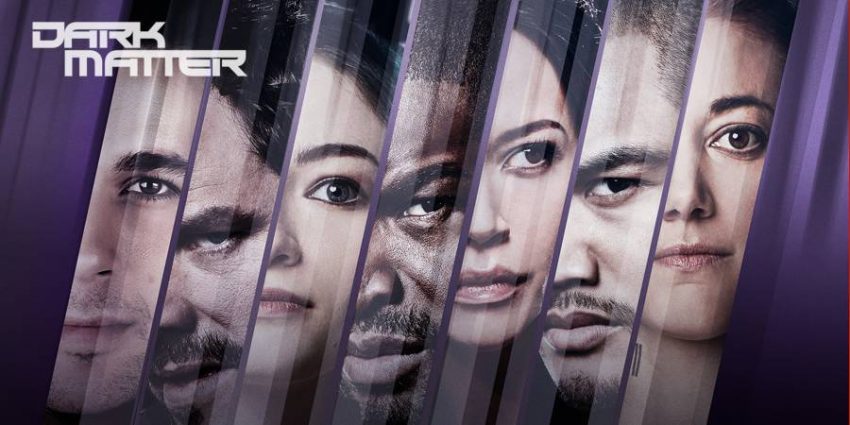 We’re so close to the season 2 premiere of Dark Matter you can almost smell those fishy-tasting protein bars THREE hates so much.  Excitement is building as fans anxiously await the premiere, looking for every promo, sneak peek, picture, and hint to be found.  Since we’re huge fans of the show just like you, we decided to take our questions right to the source – Showrunner/Writer/Co-creator/Producer/Dog walker Joseph Mallozzi. 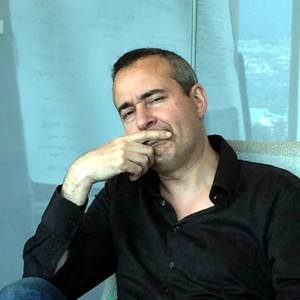 Joe’s not too sure about my interviewing abilities & I don’t blame him! (Image courtesy Joseph Mallozzi)

Joe is generous almost to a fault and he proved it once again by granting Three If By Space this exclusive interview.  Delving into season two before the premiere is tricky – You want to learn all you can, but you don’t want to be spoiled.  Don’t worry, Joe’s an absolute master at walking that razor thin line between teasing and spoiling.  Even so, if you’re particularly averse to insider information about your favorite show, you may want to avert your eyes.  But before you do, please share this post with all your friends!  They’ll love you for it.

The interview’s about to start, so take your protein pills and put your helmet on.  Major Tom’s about to have a conversation with Ground Control (aka Joe Mallozzi)!

I know you’ve made tons of TV, but did you make any changes to the way you film Dark Matter from your experiences during season 1?

Mallozzi: Every season offers lessons, especially so in the early going.  There were a number of takeaways from the show’s first season that informed our decisions, creative and production, in season 2.

Which character changes the most in season 2?

Will there be some different or unusual team-ups between characters this year?

Mallozzi: Heading into season 2, I knew that I wanted to write a story involving THREE and FIVE.  I loved their interactions in season 1 and loved the idea of throwing them into a situation in which they had no one to rely on but each other.

If you had to pick just one, which episode of season 2 is your favorite. And, not asking you to spoil, but can you say why?

One of the funniest moments of season one was when a jealous Android did a rapid-fire variety of accents. Will Android/Zoie be affecting any accents again this year? The season 2 promos have shown a few different looks for her, and I wondered if any of those looks came with an accent.

Mallozzi: Sorry, no new accents.  But a number of new looks.

How long will it be before we learn more about the mentioned “pockets of extra-dimensional space” and how big of a role will it play in the overall plot?

Mallozzi: We won’t have to wait long to learn the secret behind the mystery key and ensuing revelations will carry through season 2 and beyond.

Will the “nonhumans” I’ve heard you talk about in season 2 be in any way related to the other universes?  And “nonhumans” could simply mean androids or genetically-modified animals; something made by humans. Let me ask this directly: Will there be any traditional scifi space aliens?

Mallozzi:  Other universes?  No.  Aliens? Could be.

If you get to follow your 5-year plan for Dark Matter and Syfy says they want a 6th season and potentially beyond, do you have a plan to go on with the adventure?

Mallozzi:  I’ll be honest with you.  I have a five year plan in mind and would be very content to see that five year plan come to life.  While I’m not saying a sixth season couldn’t happen, I would say it’s unlikely I’d be part of it.  Unlikely.  But never say never I suppose.

Would you like to see Dark Matter make the jump to a feature film one day?  Video game?

Mallozzi: Zero interest in features.  A video game?  Easier said than done just going on my experience with Stargate  but again, who knows?

Dark Matter is undeniably the most fan-accessible show in the history of television  You blog every single day, often interacting with fans. How do you find the time to do everything (including answering these questions)?

Mallozzi: Early mornings and late nights.  Also, given my line of work, you learn to write REALLY FAST.

Is there anything you’d like to tell fans about season 2 that you’ve not yet been asked?

Mallozzi: There are going to be some BIG surprises in store for the show’s second season.  You’re going to want to catch the show when it airs rather than waiting and risk getting spoiled online or by shocked coworkers and friends.  Don’t say I didn’t warn you!

What can you tell us about this new military scifi pilot you’ve hinted at?  Space: Above and Beyond appears in my head every time you mention it.

Mallozzi: Not much to tell at this point.  It will be very different from Dark Matter in terms of tone, focus, and characters.  I’m going back to Stargate military roots in some ways.  I’m consulting with military personnel and will have them vet the script once it’s complete.  In terms of subject matter, I’m taking my cue from works like Ender’s Game, Starship Troopers, and David Weber’s Honor Harrington series.

Do you ever get tired of answering essentially the same questions over and over?

Mallozzi: Do you mean people asking the same questions?  No, not really.  It simply means I have the answers ready.

If you were stranded alone on a deserted planet and could only have 1 member of the Raza crew with you, who would it be?

Mallozzi: Probably the Android.  She could hunt, source, and prepare food and I wouldn’t have to share it.

Who would you most like to have by your side in a fight?

Mallozzi: Given her card-counting abilities displayed in season 1, I’d have to go with TWO.

On a road trip?

Mallozzi: Probably SIX.  He’s easy-going and seems like a guy who’d do most of the driving.

For a Netflix and Chill weekend?

Mallozzi: Um, Netflix and Chill is a euphemism, right?  You sure you want me answering that question? (EDITOR’S NOTE: I just thought it meant binge-watching and being lazy!)

Have you reconsidered attending San Diego Comic Con this year.  Fans would love it if you showed up, and didn’t Akemi enjoy it?

And that concludes our interview.  But before we roll the credits, I want to take a moment to thank Mr. Joseph Mallozzi for his generosity and wonderful answers.  I also want to thank you, our readers, for being fans of our site and for having the good taste to be fans of Dark Matter.  Join us live-tweeting every episode beginning with the premiere July 1 on Syfy and Canada’s Space channel!