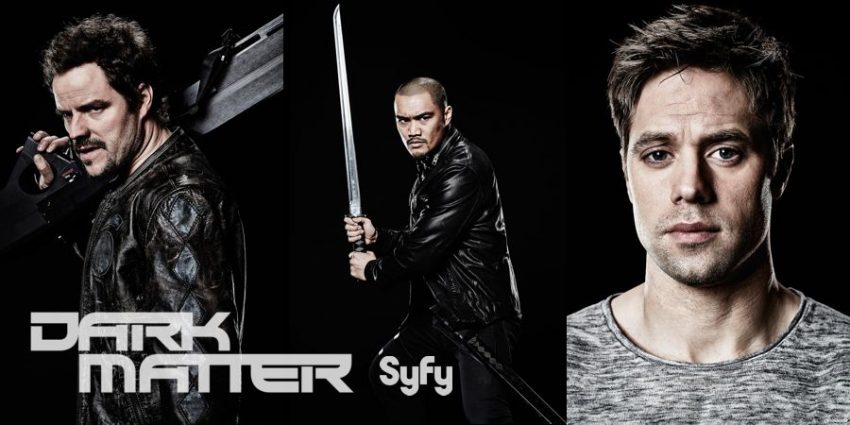 Welcome to the first of two interviews with the season two cast of Dark Matter.  Syfy graciously invited Three If By Space to participate in two separate conference call interviews.  This first interview included Anthony Lemke (THREE), Alex Mallari, Jr. (FOUR), and newcomer Shaun Sipos (Devon) who plays doctor.  I mean the doctor.  No, not THE Doctor.  Look.  He plays the medical professional on the Raza crew, okay?

We were given an entire hour to grill the Three Amigos on their stint in prison and what’s to come in season two.  We interrogated Shaun Sipos on what it’s like being the new kid on the (cell) block, learned just a tease of Mallari’s secret journey, and discovered Lemke’s love of Pixar films.  It was a fun hour and we’re grateful to be able to share it with you.

(Editor’s Note: Questions come from multiple reporters working for multiple outlets.  Some questions and answers were moderately edited and/or paraphrased for length and readability.) 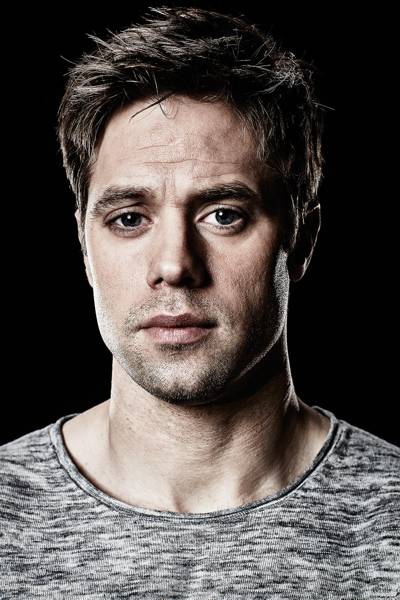 Shaun, what was it like for you in joining an already established cast?

Shaun, the crew of the Raza are friendly with each other most of the time, but not always with others.  Does Devon get along with most of the crew or will a few remain suspicious of him?

(Sipos) Yeah, I think that they’re suspicious of Devon.  He proves his merit pretty quickly – There’s a couple incidents that happen in the prison that show Devon has some worth in terms of becoming a crew member.  But I think that they’re suspicious throughout the majority of it just because he’s a stranger and the way he came aboard the ship was very circumstantial.  It wasn’t like he was chosen.

Anthony, how much trouble does THREE’s mouth get him into while he’s in Hyperion-8?

(Lemke) The same amount of trouble as always.  Let’s just say THREE got in a fair amount of trouble in season one because of his mouth and his attitude, and that put him on the receiving end of hard blows.  And you will not be disappointed in season two if you like to see THREE get beat up.  However, THREE also gives as good as he gets.

Anthony, does Bubba ever get better batteries?  We were constantly seeing Bubba run out of power in season one.

(Lemke) You know, Bubba’s a fickle friend, isn’t he?  He’s gotten me into a lot of trouble, so I guess maybe in that way he’s fitting for a character like THREE.  It’s interesting, because if you think about what happens at the end of season one, things like Bubba would be seized and destroyed by the Galactic Authority.  So the question really is not so much the batteries, but do we even see Bubba again?  That, you’re going to have to figure out by watching the show.

Alex, in a pre-memory wipe flashback in season one it was shown that FOUR cast the deciding vote to keep FIVE on the Raza.  Will we ever find out why he decided to keep a kid on board a ship full of mercenaries?

(Mallari) He was Ryo when he made that decision.  That does get answered in season two, but I can’t give out too much now.

Could you all talk a bit about how these new crew members are going to affect the group dynamic?

(Sipos) Speaking from my point of view, I think that Devon has a unique effect on the ship because he’s a healer.  Everyone essentially trusts a doctor and it’s a source of comfort if things go awry.  He’s someone that can fix the insides of someone, but the big thing is his insides are all twisted up.  So it’s a bit of an odd situation.  He provides comfort to some, while others don’t quite trust him until later on in the season. 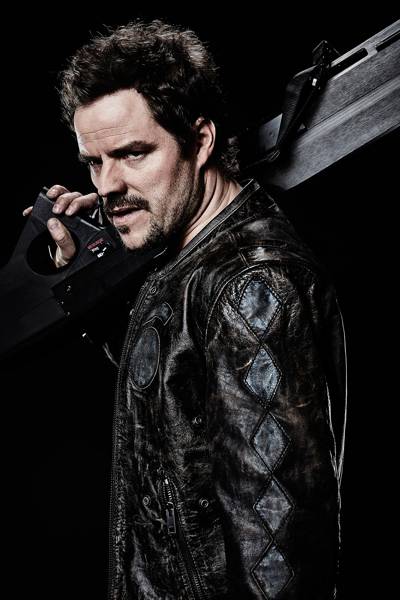 (Lemke) THREE’s been established as the character that doesn’t trust easily and that’s a pretty consistent trait throughout season two as well.  It’s true, he does prove his merit, but for some folks it takes a heck of a lot more than it does for others.  THREE doesn’t get there lightly.

(Mallari) FOUR is just suspicious of everyone, and the new members coming in just add more to the puzzle.

How do each of your characters change or evolve in season two?

(Lemke) There’s an individual THREE develops a much deeper bond with than he had in season one.  As an actor it’s really, really rewarding to play.  Also, I think as a character it’s a really wonderful relationship that Joe (Mallozzi) and Paul (Mullie) have started to expand on in season two.  You see THREE moving on down the empathy route to be able to interact more as a person in a caring way.  But it’s still in a THREE way, you know?  He doesn’t all of a sudden turn into ONE.  He’s still THREE, but I think it’s the most fun change that happens for him.

(Mallari) He realizes he has an agenda.  I can’t give out too much, but I’m really excited about it.  How it develops is the exciting part.

Alex, will Ryo try to reach out to his brother to try and find out who actually killed his father?  What can we expect there?

(Mallari) With this agenda that he has, one of the things he’s always trying to figure out is how to get that vengeance that’s always haunting him.  I can’t say much at this point, but all storylines will have their answers in due time.

(Mallari) Game of Thrones for me.  I can’t stop watching it.  I love that show.

(Lemke) You know, the truth is I’ve got three young kids.  So we don’t have a lot of time to watch TV and whenever we do, it’s with the kids.  We try to create a bit of family time and I’m really in the zone of Pixar movies.  I think it’s some of the best storytelling out there.  They just don’t miss.

Every single one of them that comes out, you watch in the theaters.  Then of course you get it.  We are in the DVD world; that’s what we do, and we just watch it over and over and over.  Something like Inside Out is just one of the best movies that I have seen.  I can watch that thing over and over and still be touched and still see new things.

Is it me geeking out?  No.  Technically it’s my kids geeking out on that stuff, but I’m more than happy to go there with them because they are just wonderful, wonderful pieces of storytelling.

We’re living in a Golden Age of science fiction television.  On Dark Matter, there are good questions being asked.  Can you talk a little about how you see the genre develop? 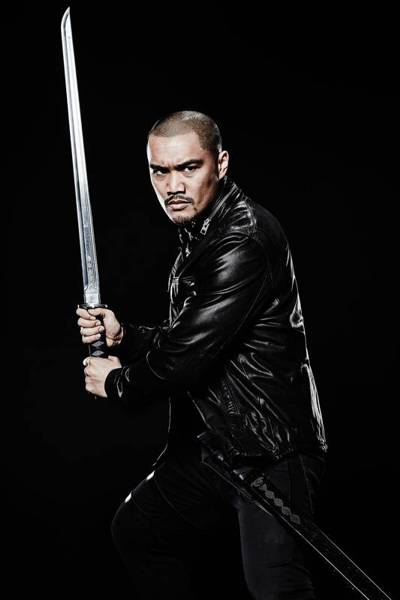 (Lemke) I think if you went back, say, six years, would you see a single spaceship show on Syfy?  I’m pretty sure the answer is “no”.  It seems we went through about a decade where you just couldn’t get a spaceship show off the ground in any sort of serious kind of way.

I think there’s a bunch of reasons for that.  One is I think we as a society stopped dreaming about space and space exploration.  I think if you just do a quick Google search on Neil deGrasse Tyson and you’ll see what he has to say on the importance of space exploration to humanity and to technological innovation.  You’ll understand the importance that is starting to emerge again, I think, with guys like him.

There are also things like the European Space Agency saying, we want to put a base on the moon by 2030.  And the American President saying we’d like to send someone off to Mars.  Also, we’re talking about it again and writers and business people, they respond to the zeitgeist in society at large.  They also play a part in driving it, for sure.  It’s a feedback loop.  When we start talking more and dreaming more and planning more and spending more bucks on looking upward and outward from our own planet, that’s when you start getting stories about it.

Just a little bit about who Joe (Mallozzi) is – When everyone else was talking about werewolves and vampires and such, that was where we went with fantasy as opposed to science based fantasy.  Joe has always been a massive scifi fan.  I’ve been to his house and he’s got an entire room … I think it’s probably literally almost every science fiction book ever written.  I’ll be honest with you.  You’ve got to see it.  It’s like entire walls, twenty by twenty and the whole thing has ten-foot-high ceilings and it’s just full of books.  And they’re all science fiction.  He cares deeply about the genre as a storytelling vehicle.

When you take away the constraints of reality, you can talk about a lot of really cool things that are actually really important to our everyday real life and to what it is to be human.  And that’s what they seem to enjoy most.  After having worked on both seasons largely guided by Joe and Paul, not entirely written by them, but it seems to me they tackle that head-on.  And they seize the possibilities and the opportunities of scifi head-on.

If you had the opportunity, would you to go into space for real?

(Lemke) The answer has to be a little more nuanced than that because we do have the opportunity now, if we have a hundred twenty thousand bucks, or whatever it is.  You can go fly into space.  You can go hang out at the space port and jump in a ship.

(Both) [Laughing] (Editor’s Note: Shaun Sipos had to leave early.)

(Lemke) I think right now I probably wouldn’t, because I have kids and I don’t think the risks are something that I would like to undertake.  But I definitely have thought about it when the kids are older and they’re basically taken care of, and, you know, got a fair amount of money in the bank or at least a lot of equity in your house.  Would I cash in a hundred thousand bucks at that point in time to go into space?  Yeah, I think I really would.  My wife doesn’t seem to want to, but I’m like, “Yeah, let’s go!”

A question I think a lot of fans are wondering about is will you guys be live tweeting during the broadcast?

(Lemke) It’s one of the coolest parts.  Although, to let Americans know, July 1st is our “July 4th” and ten-o-clock is, generally speaking, when pretty much all the fireworks happen.  So I might be tweeting from the fireworks this July 1stat ten.