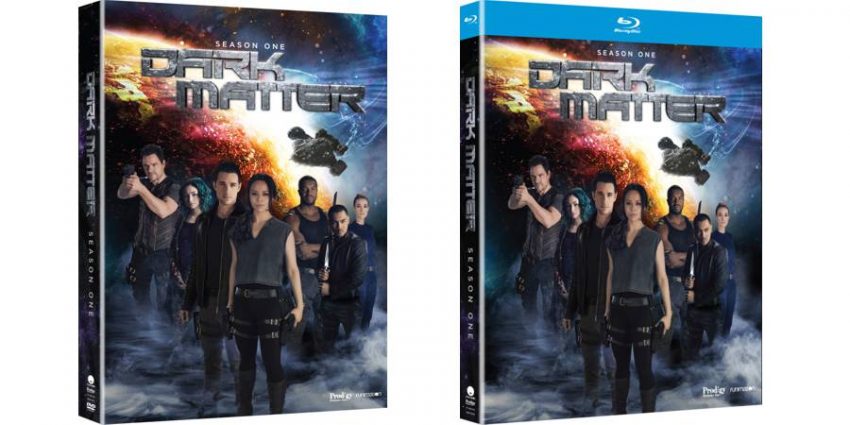 If this news doesn’t excite the pants right off you, you’re probably not wearing pants.  FUNimation recently announced the release of Dark Matter’s first season on DVD and Blu-ray coming June 14.  Fans of the hit scifi series have been waiting for this news for what seems like forever, but now we can bask in the glory of a release date!

Space cowboys and wanderers rejoice! Coming very soon is the hit live-action Syfy series, Dark Matter: Season One, on DVD and Blu-ray on 6/14. Now you can start fresh with the amnesiac crew of the Raza and go through the horrors of space from the safety of your home theater. Pre-order your copy here!

The launch date is Tuesday, June 14, but instead of anxiously holding fistfuls of cash in your sweaty palms for the next several days, you can pre-order it at the link above.  You know, where it says “Pre-order your copy here!”  Yeah, that link.  Click on it and buy a few copies.

Yes, I said a few.  You have friends, right?

In case you’ve been stuck in a stasis pod for a ridiculously long time, here’s a brief synopsis of the show direct from FUNimation’s website:

From Joseph Mallozzi and Paul Mullie, the authors behind the Stargate series, and the studio that brought you Lost Girl, comes Dark Matter, an intergalactic story of strangers chasing their pasts towards an uncertain future.

Buried in the black murk of space, a stowed-away crew suddenly awakens from stasis aboard the castaway spaceship known as the “Raza.” With no memory of their pasts or why they are onboard in the first place, this rag-tag crew has no choice but to roam the frontiers of the galaxy searching for answers.

On their voyage they encounter rebel space armies, a zombiefied ship crew, derelict androids, and intergalactic bounty hunters – all attempting to pull the team further from the truth. Even the Raza itself contains mysteries that the crew must solve. As they journey through space, these seven strangers begin to discover that the biggest obstacle standing in the way of their pasts may not be the danger waiting around every corner, but the darkness lurking within themselves.

Hurry up and pre-order your copy of Dark Matter Season One on DVD and Blu-ray now.  That way you’ll have plenty of time to binge watch the entire first season before the season 2 premiere on July 1.

See you in space!

Dark Matter will return with season 2 on July 1, 2016 on Syfy and Space