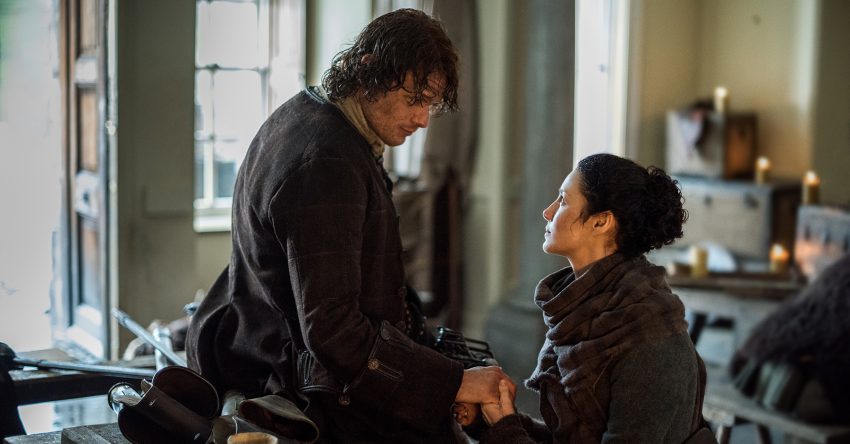 Outlander: Ep. 212 Review, The Hail Mary – A Prayer for Help

Last-ditch efforts, final words, dying declarations. While Jamie is trying desperately to avoid the disaster at Culloden Moor that Claire has predicted, smaller dramas are happening, apart from the war. And there are more than one Hail Mary efforts, more than one prayer for safety or change, being raised. In football, a Hail Mary is a long-distance desperation throw, not knowing if anyone will be downfield to receive; in prayer, the Hail Mary is a request for intercession. Last night’s Hail Marys were both. And sadly, none of them had a chance at succeeding.

Despite the multiple traumatic events in this episode, the emotional level rarely got high enough to make us feel the urgency of their efforts, and gave me a bit of burnout. Two big deaths, failure after failure without letup – yes, there was a lot that had to be included in this episode since there’s no time left to do it. But this is a direct result of the decisions made to rearrange events, to add in too much in previous episodes, and to then have to wrap up several stories all at once. There was too much going on, too many events all hitting the same notes. Viewers weren’t able to recover from one before the next hit. That’s not to say that each individual piece wasn’t well done, but on the whole, when you combine this many similar pieces, you get a bit of a mess without an opportunity to breathe – all go, no rest. Given a little more room to tell a story, we could perhaps have had some of the lighter moments Diana had written into this section (even if they were out of order). Like Jamie’s demonstration of his sword prowess, or Fergus’ antics. It would have allowed the viewer some recovery time, and given the shock or sadness of the next trauma that much more impact.

Of course, the biggest gamble was Jamie’s attempt to keep Prince Charles from having the army move onto certain slaughter at Culloden. He’s reaching at straws – first trying to convince Charles that the wiser course is to wait for gold that supposedly is coming from France, and using that to resupply the army. In the meantime, he suggests, they can split the British army, conduct smaller battles, and then they’ll be in better position to make a more successful outcome. But Charles doesn’t like this – while he values Jamie’s opinion (and again, stroking his cheek, there was too much of this – among various characters – for comfort), he rejects the suggestion to wait. “I am a man, and a soldier. And I shall comport myself as one.” 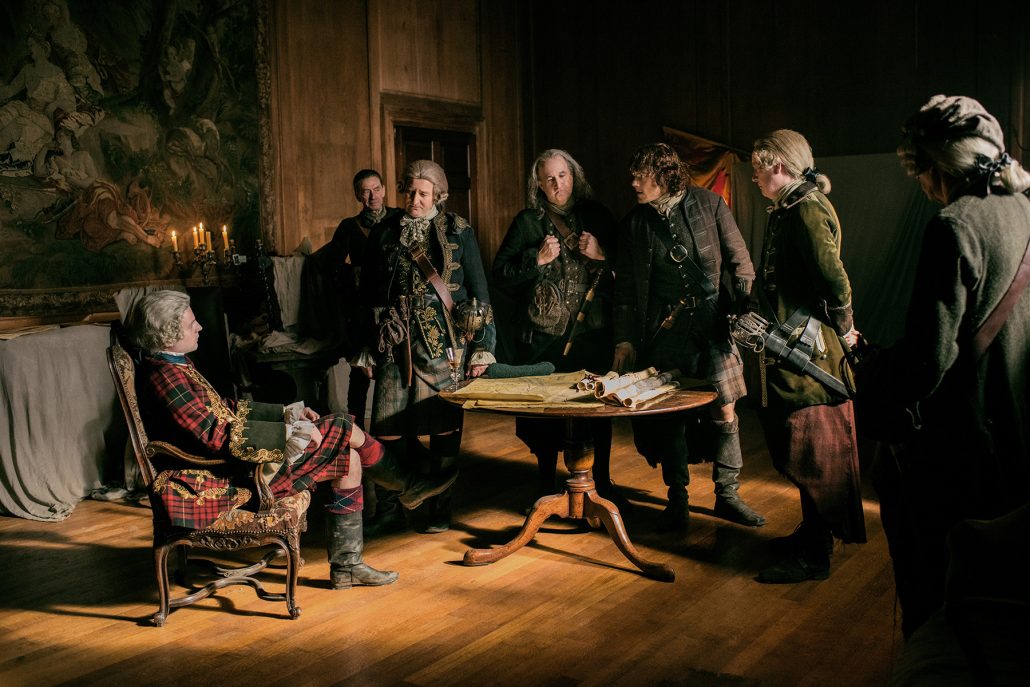 Jamie’s second try has, on the surface, a better chance of success. Acting on the information that Claire gets from Randall, from Dougal’s scouting, and from other reports, he wants to attack what would be an unprepared, unsuspecting British army celebrating the Duke of Cumberland’s birthday (the Duke leads the British army in this fight) – but is sabotaged by Quartermaster O’Sullivan, whom I have come to loathe. When he insisted that instead of General Murray, a Jamie ally, and Jamie himself leading separate columns, that Jamie and Murray lead one, and O’Sullivan and the Prince lead the other, you just knew that something would happen to keep this from working. And there’s no way the Prince’s group just got lost without any help in the effort – O’Sullivan wants his minute of glory, and doesn’t care how he gets it. He’ll get the battle he demands – but glory won’t be any part of the equation.

Another Hail Mary is a little more complicated. Colum arrives to discuss his succession with the two people it affects the most, Jamie and Dougal. This division between Dougal and Colum has been an interesting development in the past two seasons. “I’ve lived my life crippled in body,” he tells Jamie, “and he has lived his life crippled in mind.” Colum has no real hope for a reconciliation, and has chosen Jamie as the guardian for young Hamish. He’s looking out for the future of his clan, and believes Jamie puts people before ideals, but can’t see Dougal giving up the chance for a spotlight to save the lives of his men. (In this, Dougal and Quartermaster O’Sullivan are disastrously similar.)

The impossible task then is really Dougal’s, not Colum’s – he makes a last-ditch effort not to change his brother’s mind about the clan succession, but about Dougal himself. As the younger brother, he was never allowed to become the man he wanted to be – he was always in Colum’s shadow, doing what Colum couldn’t. And he never forgave Colum for things the older brother had no control over; just as Colum never forgave Dougal for being whole and healthy. And now it’s too late – Colum slips away, having taken the yellow jasmine oil Claire gave him. “Oh brother, so you turn your back on me one final time and leave me alone in the dark. All because you couldn’t keep your ass on a bloody horse.” 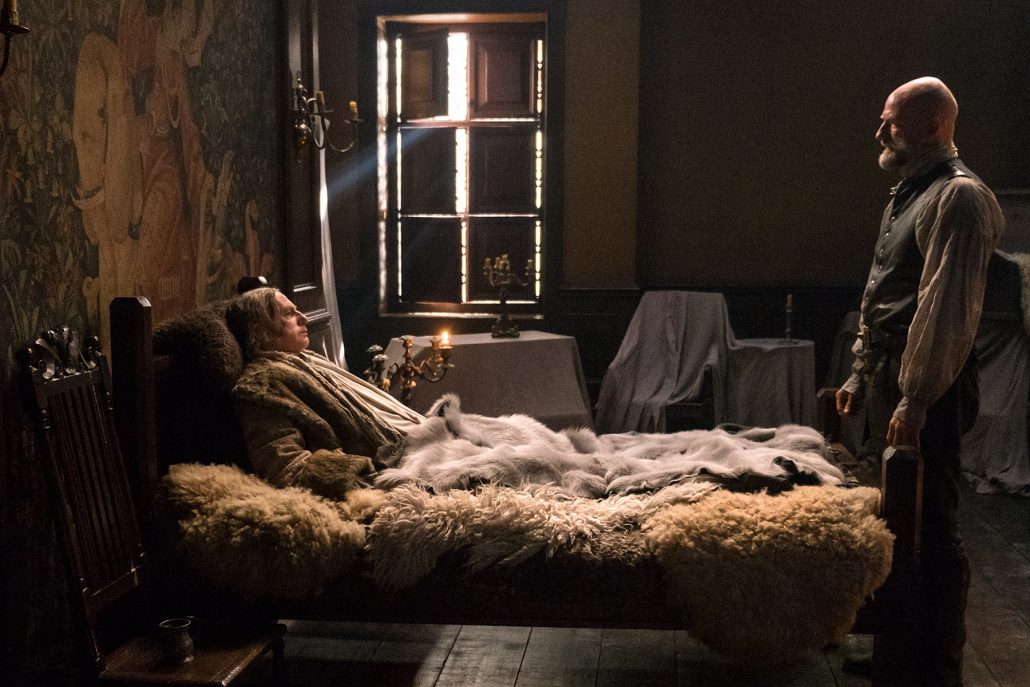 And the final Hail Mary – in more ways that one – of the night was the awful triangle of Black Jack Randall, his dying brother Alex, and the now-pregnant Mary Hawkins. At least for once, Mary’s trouble was not as the result of knowing the Frasers! The Hail Mary here was Alex’s. He wanted to be sure that Mary and their child would be cared for, and even at the last, he was unselfish and loving, knowing that his brother could do something for her that Alex himself could not have done. “I commend the well-being of those most precious to me to the man I have loved the longest. You think I am unaware of the density of the dark wall you have built to protect your better self from the world? But I have borne witness to your tenderness. I have been the beneficiary of your generous soul. That inner man is the one to whom I entrust my love, and my child.” 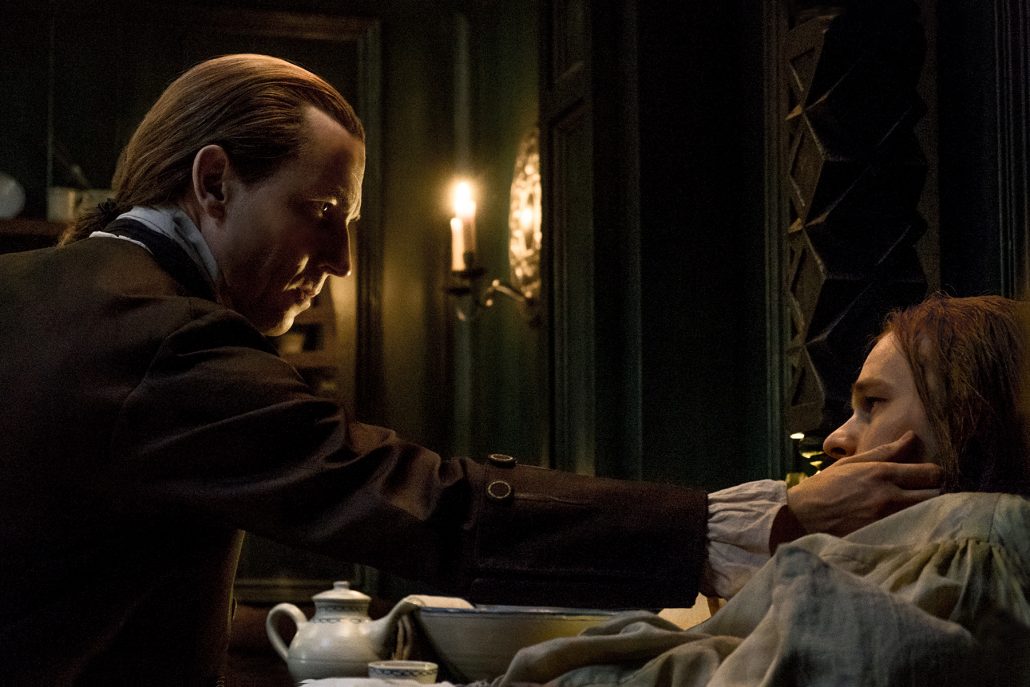 This puts all of the pieces together for Claire – why Frank is supposedly descended from Jonathan Randall – but Alex couldn’t possibly understand his brother, despite believing he does. His dark wall is more shielding the bad things from being revealed to the rest of the world, rather than hiding the good, and Jack tells Claire as much. “What kind of god creates a world where monsters thrive, and beauty and purity is rewarded with poverty and death?” 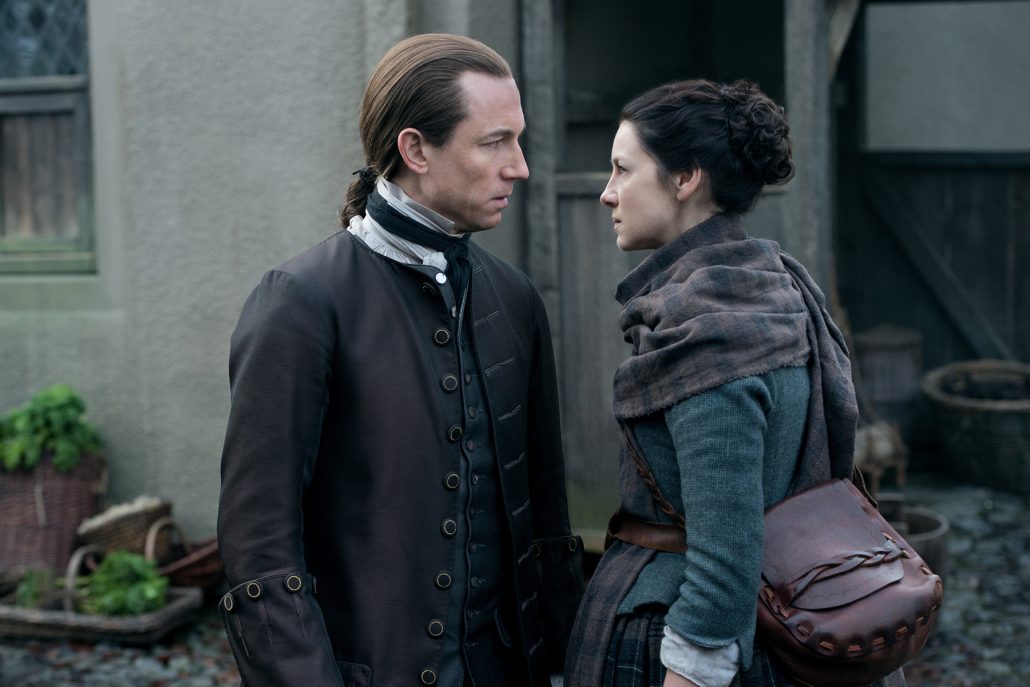 Murtagh’s declaration that he himself will wed Mary was very sweet and very interesting. Obviously his little amour with Suzette has him thinking in more domestic channels, and he’s had a soft spot for wee lassie. “We could learn to get along. People do,” he tells Claire. Of course, how many of us would rather see her married to Murtagh than to Jack? (If you didn’t raise your hand there, go away.) But Claire is right, he could be dead any day – and likely will be, with the future she expects to happen – and then what becomes of Mary and the child? 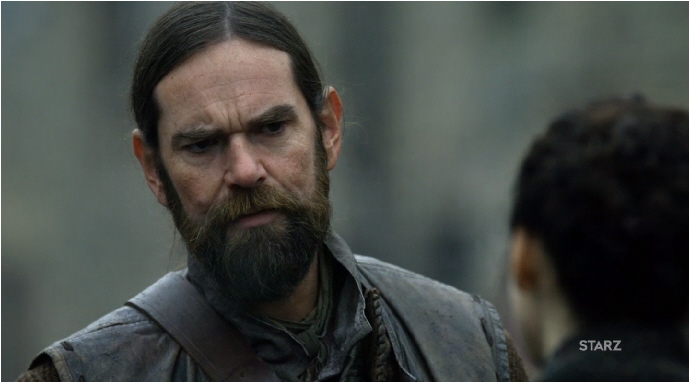 The night’s highest emotional point, and one that demonstrates to me Ron Moore’s biggest sidetrack of the series, was one I hated. Hated. And it was an unscripted actor decision, apparently, that was approved – when Alex dies, Black Jack, unable to manage his emotions with any sense of propriety, violently punches his brother over and over. His beloved brother, the only person who saw any good in him, even if it was likely a figment of Alex’s imagination – and Jack violates his still-warm body. To make this the strongest emotional point in a highly dramatic episode said right there that characters other than Jamie and Claire are at the heart of Ron Moore’s story.

We know already that Jamie and Claire are separated, and that would only happen if there is disaster at Culloden – the outcome, even to those who haven’t read the books, is never in doubt. So the dramatic high point of the episode shouldn’t be a minor plot point with a supporting character. Even Colum’s death, a character many of us are more invested in, isn’t treated as this important (and never mentioned again in the episode!). Yes, we’re sad about Alex. Yes, poor Mary, but Claire has promised that no matter what, Black Jack won’t live past the next day, so we’re not too afraid for her. But it’s Jamie and Claire who should hold that tense, heart-wrenching spot. I expect we’ll get a lot of that in the finale, at least I sincerely hope so, but once again, we only see them together in passing. A quick forehead kiss here, a brief word there isn’t enough – I want to see why this will be so heartbreaking for them. Why this series, and their love, has lasted through 8 books so far, and has hundreds of thousands of fans. We’re not here for Black Jack, we’re not here for Frank. But apparently, Jamie and Claire aren’t here for us, either. 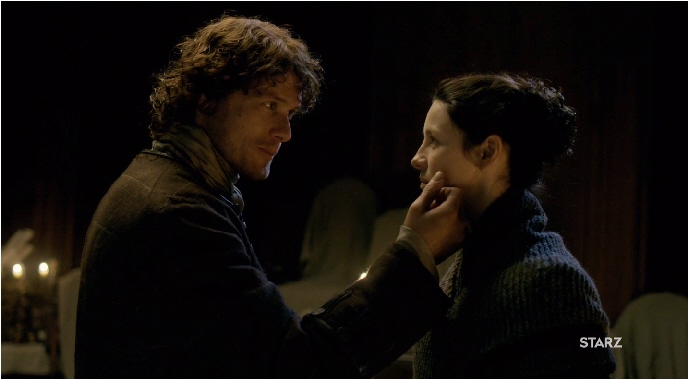