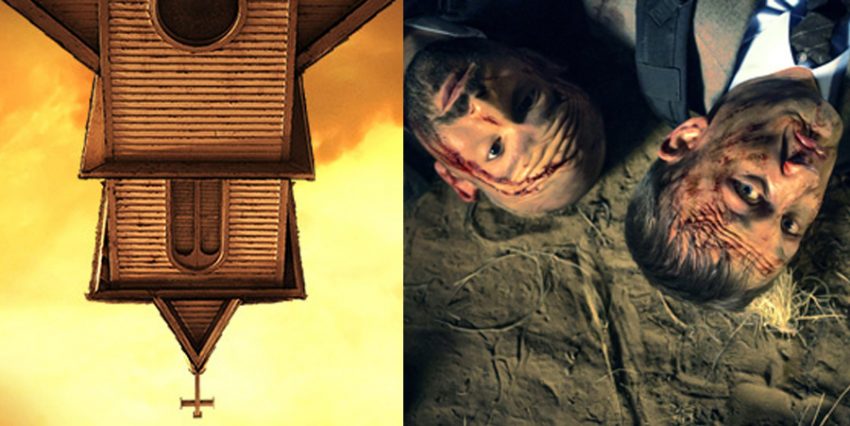 Can this show get any crazier? All I know is that, chainsaws rule! From the first, we are slightly confused by the flashback to the 1800’s. Who are these people, the little girl, her mother and this mysterious cowboy man? I think it all has something to do with Jesse’s family, but that is my opinion. I think we will see the tie in when we get further along in the episodes. This character will be one of the most important things throughout the series. Don’t forget him. Those of you who read the comics, know who he is! Could this be the The Saint of Killers? He is the Patron Saint of Murderers and Assassination. 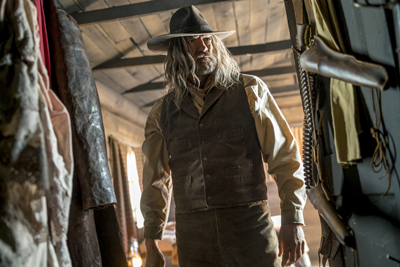 Zany, creepy, violent, gory, we got it all in this episode. Jesse really is trying his best to be a good Preacher. We see that when he baptizes some of the congregation, that Eugene, is truly trying to be reborn. Along with a man who is nothing more than a creepy, pedophile dude. Jesse doesn’t like what this dude is referring to, and keeps his eye on him throughout the episode. Hell, Jesse even baptizes Tulip, although, she is not ready to accept that Jesse won’t help her in this ‘job’ she has. 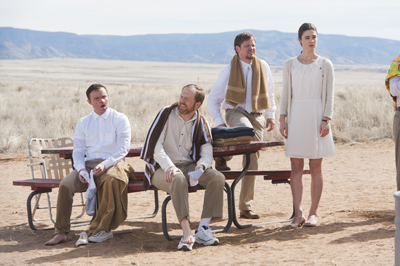 I am really liking this show. It has a bit of everything in it. I am already involved with the characters, some more than others. Eugene is a favorite. I feel so bad for him. Cassidy gets freaked out when he first see him in the church, but then look at Cassidy. He doesn’t have much to talk about, seeing that he is strange himself. We find that Eugene has tried to kill himself at some point, and that is why he is disfigured.

There is a really confusing part in this episode, that deals with some kind of ‘mob’ type boss, and his cronies. They put a local couple out of their home, make them sign papers, and then demolish it. I think it has something to do with big business, and it can’t be good that Donnie is involved. That guy is on my crap list anyway.

Jesse needs to visit all of his congregation. He makes a home visit to a family whose daughter is in a vegetative state. He tries to give the mother hope with some faith thrown in, but doesn’t get very far. 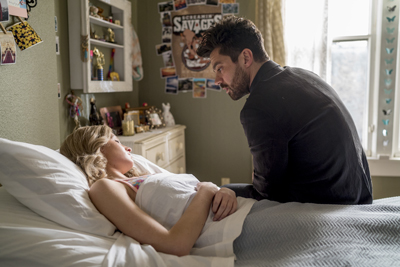 Jesse is finding his voice. Well, not really his voice, but whatever it is inside him. In a scene where a dog is barking, Jesse tells it to stop and immediately, it is quiet. This is kind of strange, Jesse thinks so too, and he tries it again later on.

Jess and Cassidy also have a heart to heart talk. Cassidy tells Jesse that he is a vampire and that people are after him. Jesse doesn’t really believe him. Jesse just wants to help people and be a good preacher. 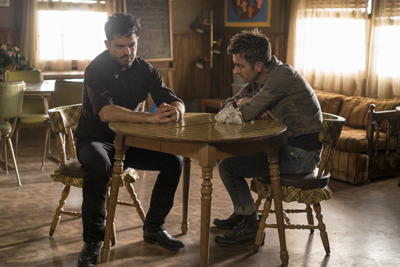 All through the episode, the 2 creepy guys in suits are watching Jesse. They are after whatever is inside him. Are they good or bad, is yet to be determined. Jesse is passed out drunk in the church, when the dudes come in, play some creepy music, and sing to him, and then decide they are going to cut him up. I guess they will take it out in pieces? Of course they don’t get very far as Cassidy interrupts and saves the day. He decides to cut them up in little bitty pieces, and put them inside their old trunk. He then buries them outside of town. He cleans up the church as if nothing has happened. 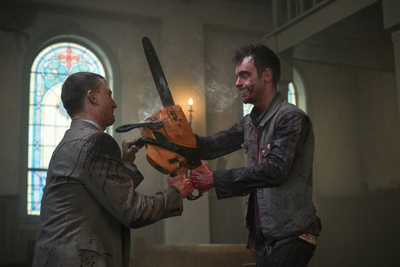 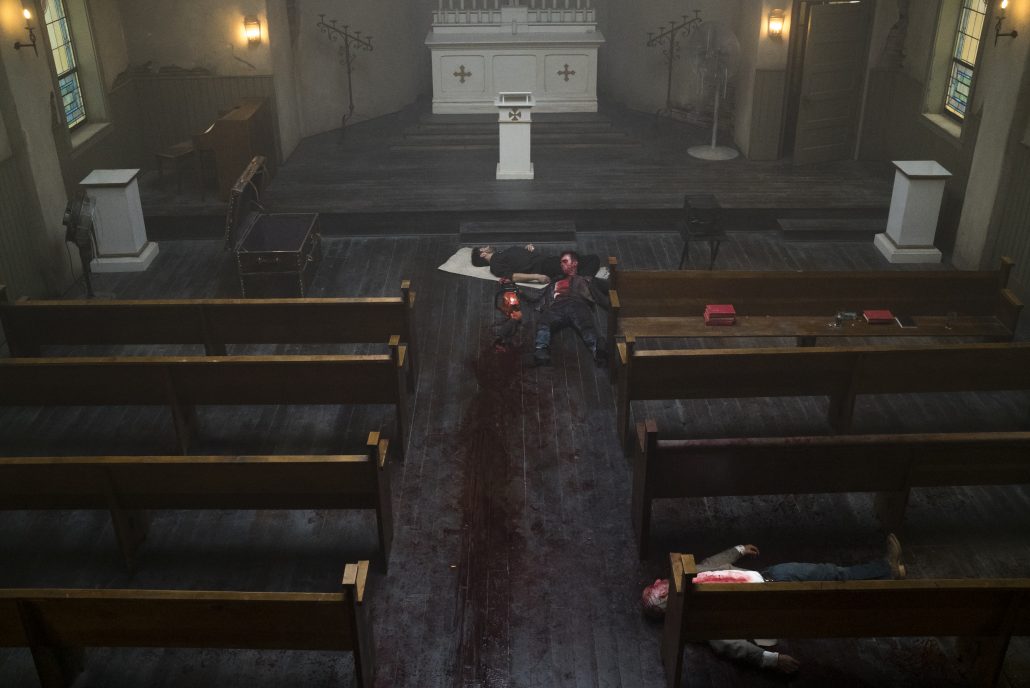 Tulip won’t give up on Jesse. She needs him to do this big job. and won’t take no for an answer. She tricks Jesseout on the road. He thinks he sees a baby seat sitting in the middle. When he gets out to look, she knocks him out. When he comes to, he is locked in a chain by the ankle. Didi Tulip really think that trying to force the issue, will result in compliance by Jesse. She tells him, he is a bad, bad, man. 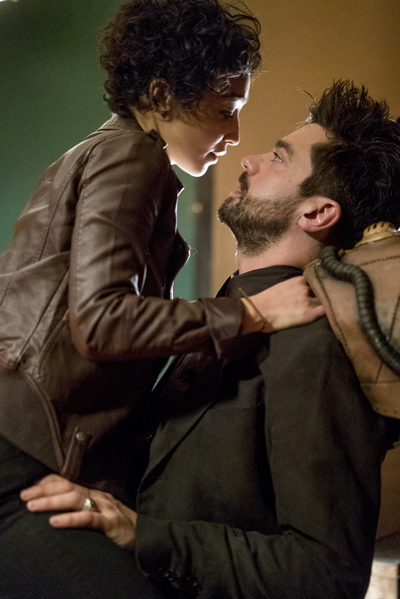 Jesse keeps thinking about the pedophile, and the things he told Jesse. It didn’t sit well with him. He goes to the man’s house, takes off his jacket, and fills the bathtub up with hot water. When the guy starts trying to talk him out of hurting him, Jesse dunks him in the water and uses the now distinct voice, and tells the man to ‘forget the girl’. When the guy comes out of the water, it’s like he has amnesia and can’t remember anything. Is this the entity working? Does the thing inside Jesse, have some power to redirect people? Jesse is slowly figuring this out. 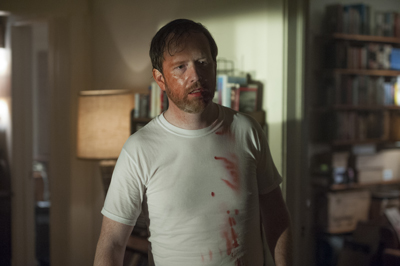 Jesse has an idea and goes back to the girl that is bedridden and comatose. He talks sweetly to her, and tells her he wants to try something. Again, the voice booms out of Jesse, “Open your eyes” he tells her.

What did you think about this episode? Let me know!