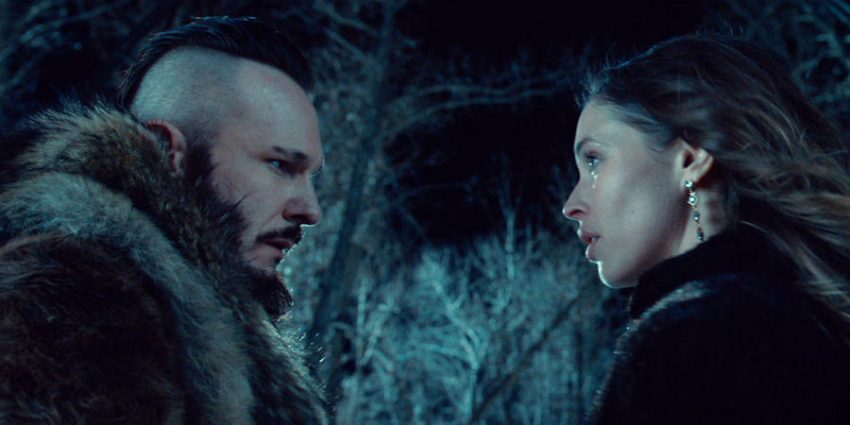 If you have not watched Wynonna Earp Episode 113 “I Walk the Line” yet, you’re missing out on a lot. This episode had so many highs and lows. Definitely an emotional roller coaster. The writers did not disappoint with the season one finale. I enjoyed every moment. Very well directed and edited. And of course with it being the last episode of the season, it left off with one hell of a cliffhanger.

So, where should I begin? Willa…

Well we all knew that Willa was pretty much a lost case when she walked off hand in hand with Robert (Bobo). She proved us correct. Once she crossed the border out of Purgatory and out of the triangle, she thought that delivered Bobo his freedom. Little did she know that Waves took Peacemaker from her and replace it with a fake which kept the curse intact. Bobo starts frying and Willa rushes him back to the other side. Not sure if she truly loves him or suffers from Stockholm Syndrome. Which ever it is, it’s sad. I know Bobo is the blame for the way she turned out, but it doesn’t stop the feelings of betrayal, ya know? In a way I wish that Constance’s memory spell she placed on Willa could of remained. I think that Wynonna could of reached the 13 year old Willa and brought her out of the dark. I guess I should be glad that Wynonna didn’t pull out the true Willa. If she had, Willa would be the heir, and we all know that Wynonna is the better heir. 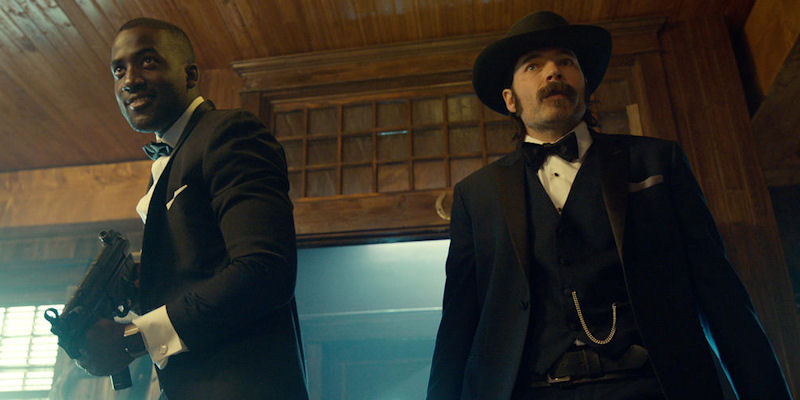 The Guys…
Doc and Dolls kicked a lot of revenant butt this week. They work so well together. Who would of thought that this bromance was possible? I love it!

In the wake of the entire town being poisoned by Bobo, the guys are on a mission to find the antidote. First stop is the Black Badge office to gear up with weapons for a fight. Now something awesome happens here… Officer Haught is brought into the fold. Doc lays it all out for her. The demon revenants. The Earp curse. Who he truly is. And Nicole is relieved that she is not crazy. Finally someone tells her the absolute truth. Dolls welcomed Haught into Black Badge with a smile and sent to find Wynonna, Waverly and Nedley.

So damn happy she finally knows. I have been waiting for this since the Jack episode.

Sorry got side tracked, back to Doc and Dolls. While at the office, Doc finally confronts Dolls about the mysterious drugs he is taking. With two vials of the drug in hand, Doc asks and Dolls explains the best he can, that it is nothing like he suspects. It is medicine to keep him alive, and a part of him dead. We all know the part he is concealing is something that turns him more than human. Those yellow reptilian like eyes. Still have no real clue to what that part of him is, but we see more of it during the episode and boy it was a fun site to witness. While storming Shorty’s, Dolls is seriously injured and Doc, still holding onto the medicine, injects one of the vials into Dolls who reacts full on dragon (my nick for the yellow eyed Dolls). He returns to the fight and literally clears the room. Doc’s reaction to seeing this is priceless. Great bonding moment for these two. 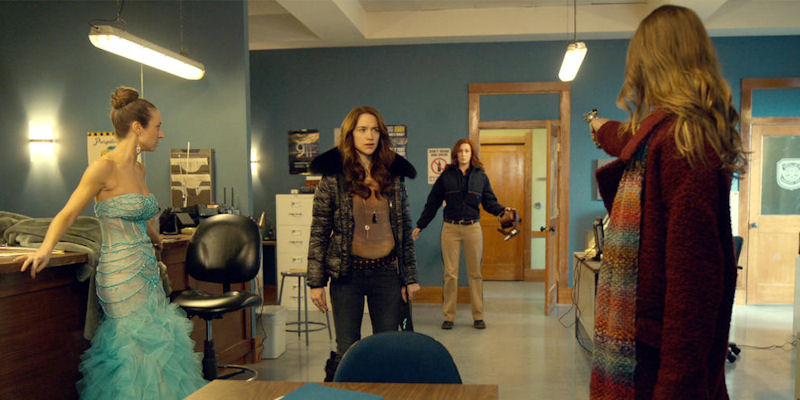 Meanwhile the entire town is out to find Wynonna. Not fun, not fun at all. Some even want to use Waverly to get to her. One being Chrissy, Waves close friend and the Sheriff’s daughter. She kidnaps Waverly and holds her in her dad’s office. Eventually Wynonna and Willa make their way to her. It is discovered that Waverly took Peacemaker. Willa is pissed and threatens to shoot Nicole, who just happens to walk in at the wrong time, if she doesn’t get Peacemaker back. It is at this time Wynonna learns that Waverly loves Nicole and vice versa. Knowing this fact now, Wynonna hands over Peacemaker to Willa to save Haught’s life. Well Willa being evil Willa shoots Nicole anyways and runs out with Wyatt’s gun in hand.

Thank God Officer Haught was wearing her bullet proof vest. That would of been the end of the world if Nicole was killed off. Plenty of shippers out there would of revolted and we all know that would not be pretty. Long live #WayHaught! 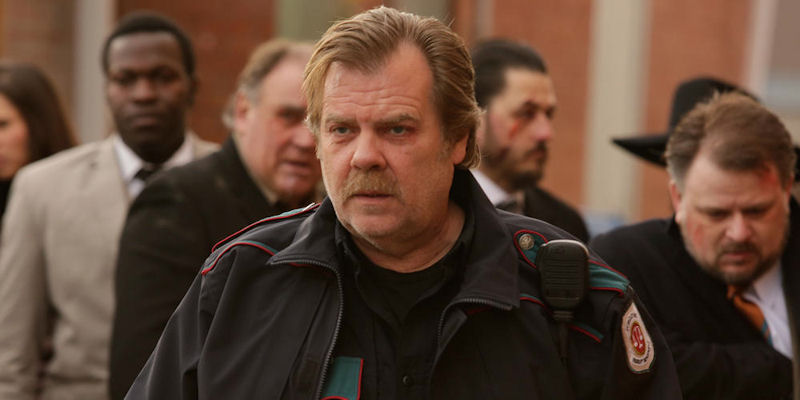 While looking for Willa, Wynonna and Waverly run into a mob of towns folk who are desperate for the cure, and willing to do anything for it, including bringing Wynonna dead to Bobo. Thank goodness Sheriff Nedley shows up and diffuses the situation. He really stands up for our girl Wynonna. So proud he does the right thing. I knew he had it in him. Very curious what the show has for him in the future. Will he (and Nicole) become series regulars? Only time will tell.

At the treehouse we find Bobo looking for Willa, but he finds Waverly instead. This encounter raises more questions than answers. He tells her everything he knows. Willa is the lead, the stone witch took her from him just before she turned 27. He says Constance would not give her back unless he put her sons bodies back together. This is all fine and dandy, wrapping the issues all up in a pretty bow. These things I think Waverly already knew.

But there is something nobody saw coming, and it will shake up the fandom. The can of worms that Bobo opens is that Waverly is NOT an Earp!! Who is her daddy then? Bobo has always had a soft spot for Waverly. My mind tends to lean towards Bobo himself, but can a revenant reproduce?Then again, Bobo could be lying. He is very good at lying. 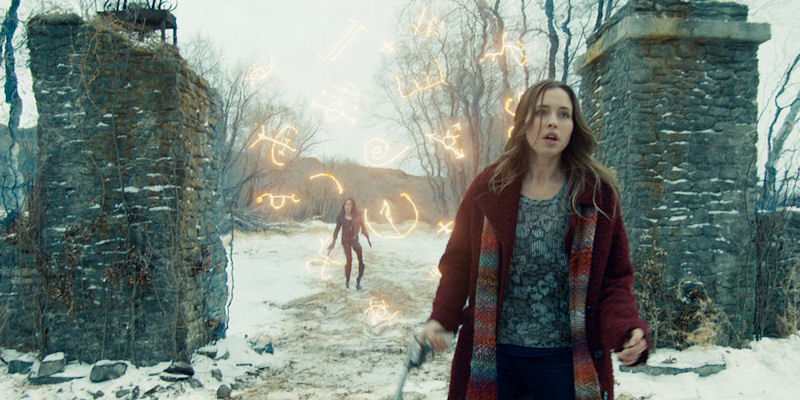 It starts with Wynonna and Doc facing Bobo and Willa. Bobo sends Willa ahead to safety as Doc fires his gun at him. Bobo using his telekinetic powers manipulates the bullets to where they flying around, missing him, even sending one directly back at Doc. He then takes Doc’s gun and Wynonna catches his attention. Bobo takes her gun as well. However Wynonna being Wynonna, has taped a grenade to the side of the gun. Bobo tries to send the gun back. It only makes it halfway. Both Bobo and Doc get the blast and are knocked to the ground.

Wynonna goes after Willa who is running for the gate. As she passes thru, the air changes. There is almost a force field effect where the border lays. It glows and on the outside it turns dark. Willa celebrates and Wynonna begs her to come back. She of course refuses explaining that purgatory deserves what is coming. Wynonna continues to plead for her older sister to come back. She knows she has to stop this thing from coming. BTW, this thing is a huge parasite looking snake thingy coming to destroy everything.

Willa fires on Wynonna but Peacemaker no longer works in her hand. She is no longer the heir. Dolls finally makes it there and fires his gun hitting Willa. Wynonna crosses the boundary to take Peacemaker as the snake takes hold of Willa. She takes aim at her sister and the gun glows blue. Make Your Peace. Wynonna kills Willa shooting her dead between the eyes. Goodbye Willa. Wynonna returns back across the border and as she slides across the snake follows as is instantly vaporized. Doc rushes to check on her. She is shaken, but is safe in Doc’s arms. Go #TeamDoc. 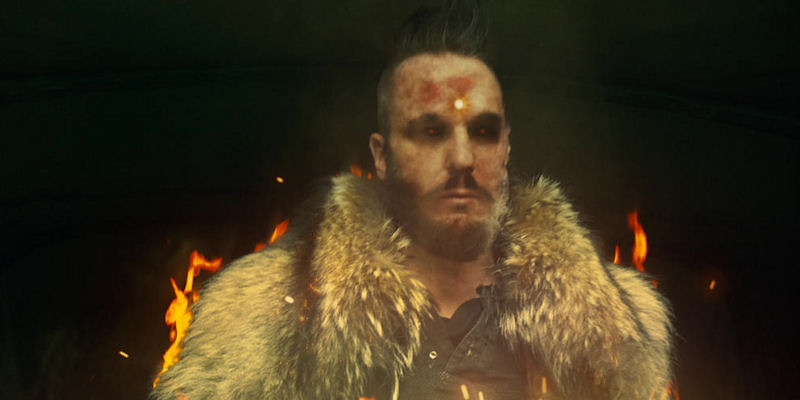 Black Badge comes soon and Agent Lucado takes both Bobo and Dolls into custody. Bobo for research. Dolls for treason. She also seems to order the town to go boom. What a bitch. Cutting this long review shorter… Wynonna kills Bobo as he crosses the boundary. Dolls is gone. Doc is by Wynonna’s side.

Later Waves comes to see the mess and for dumb reason she touches the black goo left behind by the snake. Somehow she gets infected and pulls a gun on Wynonna and Doc. There is a gun fired. Not sure who’s or if anyone was shot. We are left wondering what the hell.

I am going to miss Bobo so much. I am a proud member of Bobo’s wolf pack, and I hate the idea he is gone. I hope Wynonna and Doc are able to rescue Dolls. So many questions and uncertainties. Great beginning to this series. Thank you to everyone on the staff, crew and cast involved in season one! 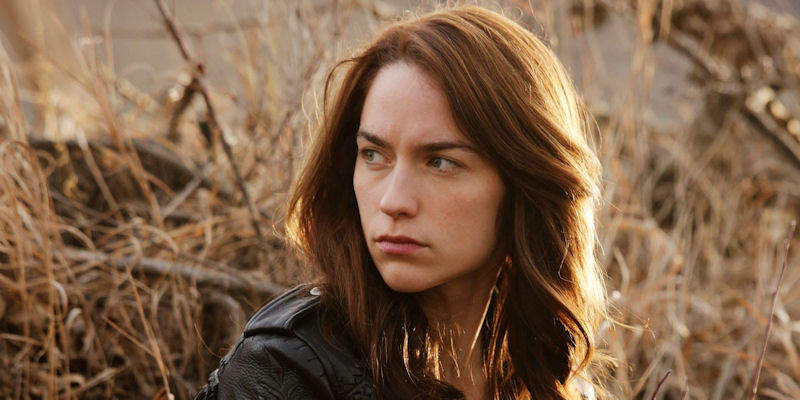 As of me writing this there still is no word on season two for Wynonna Earp. Not sure what is holding SyFy up on renewing the show, but I hope they release an announcement soon that they have indeed picked it up for another season. It would be a shame if they let this fan favorite slip through their fingers. It would break a lot of hearts, including mine.