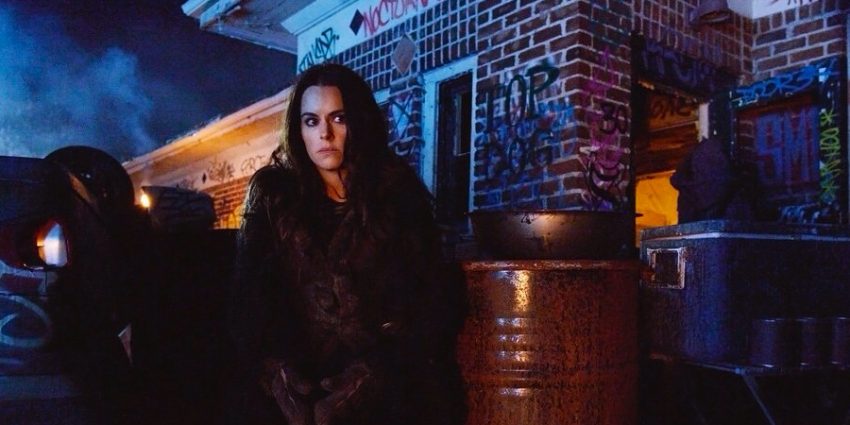 The creators of 12 Monkeys have been giving us loyal viewers a school yard beating here in the home stretch of the second season. Two weeks ago, they gut-punched us when they disintegrated Dr. Jones, thereby erasing her from time. A week ago, they let us catch our breath with a national holiday (US-based, that is). That was a lie though. They really gave their unseen buddy a chance to get down behind us while they wound up for an uppercut: Ramse, Deacon, Hannah (Zeit), and Whitely all cut down with gruesome looking blades.

At least Cole and Cassie are playing house and kissing. Fair trade? Let’s take a look.

Cassie and Cole set up shop in Cole’s perpetual New York hotel crash pad and worked at finding the final Primary. They profiled all of the employees at the factory in a cool, business-like manner. Cole handled the guys in the shop and Cassie got cozy with the office staff. They’ve given themselves a year to find the Primary, but they couldn’t make a solid call on anyone there. They did manage to ignore the fact that they could have been looking for the Messengers at the same time. They also uncovered some people that didn’t know how to keep personal business away from work (such as Mr. I Like Butts). The lack of progress ate away at their rebuilding relationship with suspicion and general pissiness with each other.

Even though Cole projects feelings of detachment toward Cassie, I bet his imagination about Cassie’s “date the Primary candidate” policy had been wearing on him for much longer than the moment he finally snapped at her. By the end of the episode, we know he’s been pining for her the entire time and everything else was an act. We always knew it was an act, but within the last couple episodes, following Cassie and Ramse’s betrayal, he erected a pretty effective emotional shield from Cassie. He was willing to let her walk. He left her at the hospital. He needed her to basically throw herself at him before he was all like, “Ok, we can relieve all this sexual tension.” He fooled himself into thinking he didn’t need her.

We’ve had a lot of rough endings and a few neutral endings, but happy endings for our heroes have been rare. Even though most of our other heroes don’t survive, that shouldn’t mean we don’t celebrate what is pretty great ending for Cole. Getting make-out time with Cassie is probably worth losing the Primary. Probably.

I’m not sure I completely buy the idea of Cole just giving up on the mission so completely though. Saying he’s put a lot on the line for the mission would be a big understatement. As a character, he’s more than a year removed from the drama with the Daughters and Jones back at the time travel facility, but as viewers that whole scene is very fresh for us. No way does Cole just say, “I’m just gonna start flipping houses,” and leave the mission as a failure. How does a guy like Cole even know carpentry? At least he picked the spooky house the Witness uses to graffiti-communicate during psychedelic-tea trips as his first project. 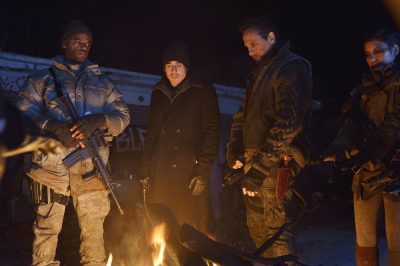 I watched this episode twice ( as I usually do ) to prepare for this review. Anytime there’s a guest star with a recognizable face and more than three lines, it should register as important. On second viewing, I was all like, “How did I not see this guy as a Messenger?” Everything he says in the bar to Cole is a version of what the Witness has been telling the Army of the 12 Monkeys.

Charlie the Messenger and Wife the Primary designed a well-crafted little ruse that everyone, Cole, Cassie, and most importantly, I, fell for. My assumption that all Messengers would have been exactly the same soulless zealots we’d seen before proved incorrect. Charlie somehow broke his conditioning to love his dying wife, but fell back on Witness doctrine to “save” her. Although he tells Cole the Witness isn’t right about everything, Charlie willingly paradoxes his wife to be able to be with her in the Red Forest… Which is something he’d only have the Witness’ word will even work. I don’t know how to follow a prophet or deity-like figure when I can only believe SOME of what they have to say.

Full belief or not, Charlie thinks this is the only option to be with his terminally ill wife and goes through a fair amount of trouble to pull it off. A false-Primary for Cole and Cassie to spin their wheels following, a woman no one knows showing up with  gun to the factory… All very spectacular, and all very desperate. This poor guy was taught from birth “no one dies in the Red Forest” and “paradoxing Primaries will create a permanent Red Forest everywhere”. In his mind, this was the only thing he could do.

This season, Cassie has been on a journey. She started the season gut-shot and transplanted to a future she was not prepared for. She healed and she adapted. She became stronger and vied to be come the tip of the spear, a place in Jones’ mission held most often by Cole.  She may have come on a little strong at first, but can you blame her? The future looks horrible and she was doing what she had to in order to survive. All that time, she struggled with how to feel about Cole. Most of the time, her head wanted to write him off – and she did for most of the season. Her heart?

As we learned at the end of this episode, it’s never simple when it comes to Cole for Cassie. She knows he loves her. She also deserves to BE loved. Does this mean she feels as strongly for him as he does for her? Maybe we’ll see next week. Something about these two in this house has to be important, right? 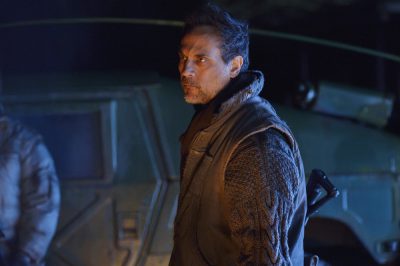 Jennifer, Ramse, Deacon, and the Daughters

What a kooky alliance out on the range, no? The strongest bond out of the bunch of them appears to be between Deacon and Jennifer. In what may be one of the only instances of remorse in Deacon’s adult life, he feels terrible about killing Jennifer the Mother and has basically sworn his sword (or assault rifle) to young Jennifer to make up for it. This shift is significant because Deacon has not played the part of the follower in a long time AND he’s the only one left in their expedition following Jennifer’s orders at all. The Daughters have become malcontent with their replacement mother and have no idea what to be doing. Actually, they know they’re not interested in blindly following Ramse, but that’s about it.

Something I enjoyed a lot was how thorough and painful Jennifer’s development into the Mother is going to be. We’ve heard her say movie quotes and pop-culture references the entire time. Her use of fortune cookie fortunes as words of comfort to the dying is both sad and enjoyable. She’s doing her best, has no idea what to do, but she won’t do nothing. She hasn’t always had it, but her willingness to act rather than wait around has been consistently building to this frustrating point. She’s got some idea what to do and who to believe, but her credibility is lacking with her followers. I can’t wait to see how she gets the Daughters back under control.

Next week: Next week is the finale. Most of the team is dead and the survivors don’t have a time machine. Could Cassie and Cole just live happily ever after in a pre-spookified wooden cabin?