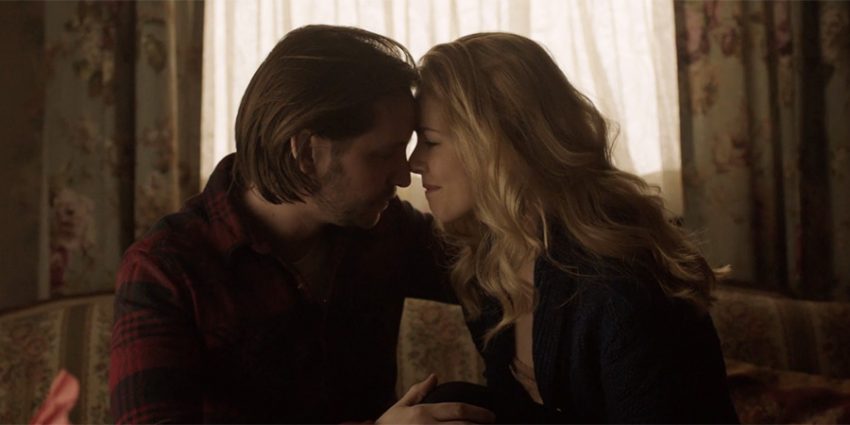 Back in the 80s and 90s, we couldn’t stand movies with one, boring ending so, movies like Wayne’s World addressed this need by including several “endings” as part of the narrative. What made me think of this connection is the way Cole gives the Titan Team a second pass at the worst infiltration ever in 2040 (I actually pictured Wayne and Garth re-enacting their side-stepping, arm-flapping routine that undid recent events in their movie). Undone pasts re-lived, kidnappings, a bizarre cult made even more bizarre, and a major reveal no one saw coming… This finale had everything. Let’s take a look at the awesome. 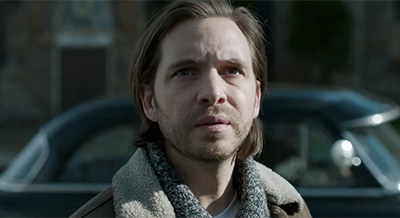 Last week, I questioned whether or not Cole could abandon the mission. He missed the opportunity to handle the Primary and set up shop in the creepy cabin from Witness-visions. Cassie woke up from her coma, found him and their relationship blossomed. Given the Christmas morning news of Cassie’s pregnancy, this was Cole’s ideal existence.  Although the show’s stakes have always been high (the saving of 7 billion souls), they’ve never been very personal for Cole. Sure, he’s had a soft spot for Cassie and Ramse that influenced some of his decisions, but now he had what Ramse and Jones had at stake: a child. By finally having Cassie and an unborn child in his life, Cole had real skin in the game.

The initial interview with Lillian, the Primary insane asylum patient, wasn’t enough to make him give up on life in 1959 though. The time stoppages, Lillian appearing and bleeding in the street, the story of how things went for Ramse and the gang at Titan… None of it made a difference. Cole had to see the beginning of the Red Forest with accompanying temporal spasms before he even considered acting on her story. The red tree was pretty convincing though and as unbelievable as it was to hear, Cole learned that he can travel through time under his own steam with the help of Red Forest Tea.

New Powers?
This is a BIG add for the show’s mythology. So far, we’ve seen people go on little vision-quests to visit the Witness’ spookyland graffiti cabin, but they all returned their consciousnesses to their bodies and woke up with a hangover. This whole season we’ve been learning about the various classes of special people in the 12 Monkeys universe and although James Cole is often mentioned by people like the Messengers with a kind of reverence, I never got the idea he was special (Like in the way Primaries are special). His special-ness works a lot like Daniel Faraday‘s experiments in LOST or like Domhnall Gleeson‘s character in About Time. He can move his consciousness back to any point in his own timeline and then move forward from there.

Think about that. If you were God handing out powers, you’d probably want to limit the number of people with this one. He can (and does) change the course of time, whenever he wants, however he wants within his own lifespan. With his power and access to Jones’ machine… He can change just about anything, anywhere, anywhen.

Oh my, the plot holes we may see. The writers have not lost the believability of this whole thing yet, but this is going to be tricky.

When we last see Cole, he’s heading into the future on a rescue mission. Hopefully he brought some Red Forest tea bags and a canteen in case he needs a do-over. 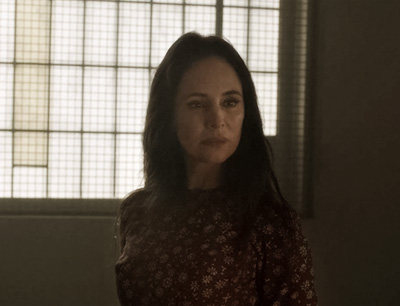 12 Monkeys 213. Lillian getting ready to freak Cole out. Image by SyFy.

Something about Lillian (played by 12 Monkeys movie alum, Madeleine Stowe) gave me a very Millisandre from Game of Thrones vibe. They both speak in riddles, wear long dresses, deal in magic potions, and put a LOT of emphasis and weight behind what they say.

She also reminded me a lot of Jennifer Goines. Yes, they’re both Primary, but her dark hair and facial features had me wondering if this person belongs on Jennifer’s family tree somewhere. Her story doesn’t match up with being Jennifer’s mother, but still, I couldn’t shake the sense of family there.

She played a character in the movie was named “Kathryn Railly”. In comic books, this would be a multiple timeline, crossover kind of story. I don’t -think- it’s anything like that though. She’s clearly Lillian in this continuity, but her inclusion inspires questions…

Now that she’s delivered her message to Cole, will she stay there? Will she appear again? I’m assuming the time-stopping trick was an ability of hers, so there’s nothing physical keeping her in the asylum anymore. Maybe she gets out and meets Jennifer’s dad? When she refers to her family as Cole is leaving her room gave me the impression she didn’t only mean the ones she’d killed earlier in her life. 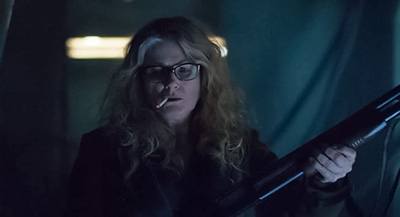 Not dead! Jones benefited first from Cole’s Red Forest Tea-fueled time-stream re-authoring, but she’s not exactly as we left her. In some ways, she went through what Cassie went through at the beginning of the season, except Jones did it alone. This new Jones is still cold and hard, but now her tolerance for BS is much lower and she shoots people. I’m not a fan of real-life violence, but the imagery of a trench-coat clad, smoking Jones, casually walking into Titan and double-tapping a 12 Monkey zealot in the face was pretty freaking awesome. Will it be the adventures of Cole and Jones trying to rescue Cassie from the evil clutches of the Witness and his pet the Pallid Man next season? I’d watch that. 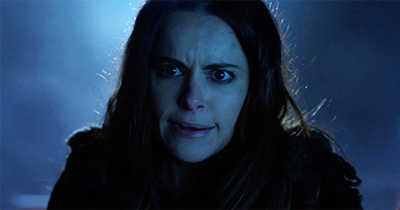 Last week I mentioned how nice it was to see the consistency of Jennifer’s personality come through in her reliance on pop culture and movie quotes. This episode featured her best Jennifer-isms yet as Jones looked on in horror and deadpanned, “What is this?” See below in the extra points section to see where her quotes came from this time. Personally, I think she had them until she went to Independence Day. Just a bit too far there.

She’s willing to act, no longer scared and in need of weapons training (although she handled a shotgun with ease earlier this season). Now all they have to do is realize she’s missing, have a willing time traveler, and go find her. With Cole busy getting his world rocked in the future with Cassie and little baby Witness, who’s left on the bench?

I bet Hannah / Zeit goes after her, but A) that doesn’t make much sense and B) she’s still right outside the Titan location. Jennifer should settle in for a little French leave while things get sorted out in 2040. 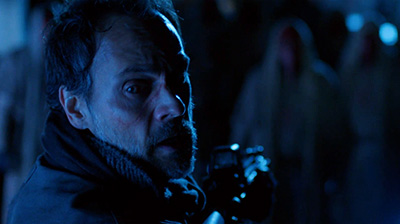 Ramse, Deacon, and the gang

Ramse and Deacon get a second and reinforced chance to invade Titan. The results were… mixed. More survivors? Yes. More complicated result than a bunch of dead quasi-allies? Definitely. Deacon looks like he was turned into a 12 Monkey stabbing-practice dummy. Jennifer was blown rather randomly into a French WWI trench (that looked like a pretty significant safety hazard – there should have been a sign or chain or something). The bloodthirsty and untrustworthy Ramse was led off into the woods to be reunited with his son and the original Army of the 12 Monkeys good-time gal, Olivia. And Cassie was abducted to the future, where things went crazy.

Cassie doesn’t have a lot to do in the finale except receive the worst news ever. As a parent, I can tell you it ruins your day when you find out your kid called another kid a name on the playground. Imagine how Cassie felt when she found out HER kid has been her own personal boogeyman AND the villain set on destroying time itself. No amount of playground name-calling would have prepared her for that.

I have a -little- problem with the continuity here though. Cassie and Cole were in love in 1959. They even conceived a child together, which Cole then un-conceived when he killed Charlie the Messenger. She all the sudden remembered their alternate history when she made the comment about caterpillars and butterflies. As a time traveler taking Jones’ injections, we’ve seen the effect of “time moving around” our heroes, allowing them to remember things out of sequence with the current timeline.

The trouble is, when time was re-written earlier this season, Dr. Eckland came into existence. Jones had apparently lived with and loved him, but she had no memory of it. A version of Jones had lived through it, just not this version of Jones. So, how can Cassie remember the butterfly gift and the alternate 1959? THIS Cassie NEVER lived through it! If Jones couldn’t remember Dr. Eckland, Cassie shouldn’t be able to remember the butterfly, let alone be pregnant!

Is it going to be a big, fat joke on the Witness and the Army of the 12 Monkeys when they find out she and Cole haven’t actually gotten down to business yet? Dear God, please don’t have them capture Cole next season and -make- them make a baby. Explanation I’d be willing to accept: Cassie, like Cole, is also special. I’m not sure becoming pregnant from a past you haven’t actually lived through is going to be a very sought-after super-power, but I’d rather her be special than some other hokey explanation. Don’t get me wrong, I REALLY need this explained…

Regardless of possible impossible pregnancies, this finale was pretty great. Knowing there will be a season 3 gives me and YOU a year to go and evangelize this show to friends. This finale will be a selling point. I had my own theories about the Witness’ identity (which were all wrong), but that’s ok, because this is (mostly) plausible and I didn’t see it coming. Great TV. See you next year.

Extra Points: Remember earlier this season when we caught up with Jennifer Goines and the background music was “White Rabbit“? Nice callback in THIS episode when Lillian encourages Cole to go down the rabbit hole. Listen to that song if this comment makes no sense to you. Then you’ll be all like, “Ohhhh. I get it..”

“I see in your eyes, the same fear that would take the heart of me. A day may come when the courage of women fails, when we forsake our friends and break the bonds of fellowship. But it is not this day!” – Aragorn, Return of the King

“This is our chance. Our one chance to tell our enemies that they may take our lives, but they will never take our freedom!” – William Wallace, Braveheart

“Be excellent to each other.” – Rufus, Bill & Ted’s Excellent Adventure

“We came, we saw, we kicked its (their) ass!” Pete Venkman, Ghostbusters