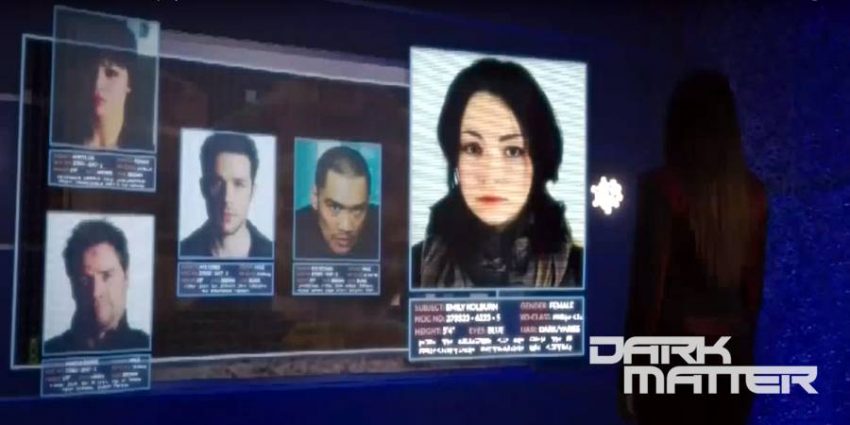 By: Tom Gardiner
202 Dark Matter Kill Them All promo

There’s something ominous, but not unexpected, about reading a title like Dark Matter 202 “Kill Them All”.  Picked by fans, like all the season two titles, the majority of us thought it was appropriate.  We had no real idea what the story was about when we voted, but it sounded right. Knowing our pals would be in Hyperion-8, we figured it was about time someone said that.  Now, to find out who spoke those titular words … next week when episode 202 airs!

Here’s the official blurb for the second episode:

Imprisoned in Hyperion-8, the crew must negotiate attempted assassinations, extraditions, and behind-the-scenes machinations as they plot their escape.

Here’s the “Next Time On Dark Matter” promo.  We learn that Arax wants to escape along with the Raza crew, Traugott Corporation wants them all dead, and the phrase “Hello, Pumpkin” isn’t referring to Halloween.  None of these revelations are surprising, but they sure as hell are exciting.  Check it out.

I don’t want to leave you hanging with a mere seconds-long promo.  That would be tantamount to putting you in solitary for two weeks.  Thanks to Arax Nero, we all know what kind of arts and crafts you’ll probably get up to in that time.  Nobody wants that.

So along with the quickie above, here’s a sneak peek that’s much longer.  There’s some interesting information that fills in a lot of blanks in just a couple of minutes.  SIX has a private conversation with Commander Shaddick (Franka Potente), Chief Inspector of the Galactic Authority Serious Crimes Division.  Which is funny, because from what we’ve seen, the GA considers every crime a “serious” one.  You obviously have to blow up a planet or a moon to get your crime elevated to the SCD.  I don’t know where the GA draws the line, but it’s probably wherever they damned well please.

Shaddick has some seriously accurate theories about what really happened on the planet that went “boom” in a very spectacular way.  She doesn’t have the evidence, but she’s on the trail, and SIX has some serious thinking to do.