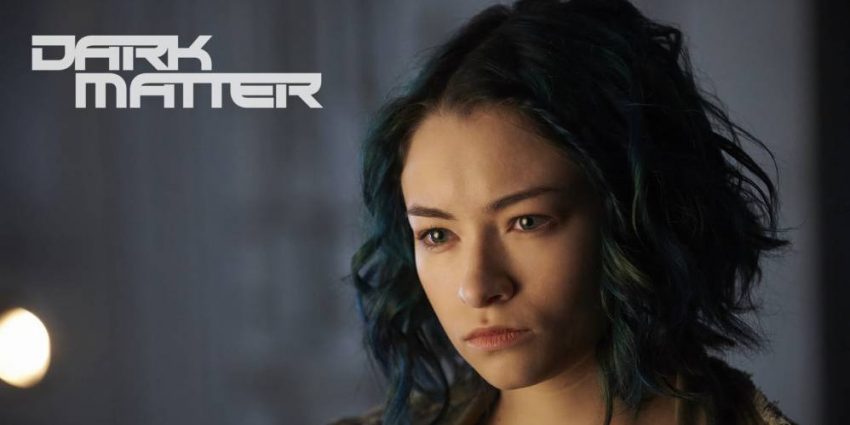 By: Tom Gardiner
202 Dark Matter Kill Them All

The title of this episode is “Kill Them All” and the point where we learn how it came to be is gasp-worthy.  More on that later.

Shaddick is grilling the crew in her investigation to make a case against Traugott.  Warden Treihan (the fantastic Carlos Rota), on the other hand, is more afraid of the mega-corp than Shaddick and the GA.  Traugott wants our bunch dead so they don’t talk about the white hole device fiasco and that’s the warden’s primary concern.  He gets our incarcerated trio moved to garbage detail where they’re locked in a garbage incinerator.  Saved by Arax before things get too hot, they’re now in his debt. 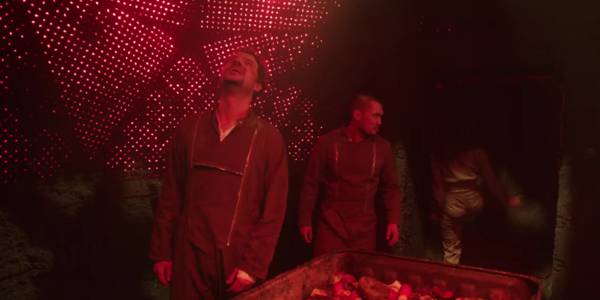 Getting all hot and bothered. (Image courtesy Syfy)

The crew aren’t admitting it to her, but Nyx is convinced they’re planning an escape.  Nyx knows no shuttle stays docked very long at Hyperion-8 to deter escape, but she’s got the shuttle supply run schedule for the next month.  Now they’ll know when a ride is parked where they can steal it.

Hoo boy!  Android is still being the stubborn, peaceful protestor.  When Shaddick brings in SIX to have him order her to surrender her encrypted files, she still refuses.  Her argument?  He’s no longer a member of the crew and, as she says to SIX, “In fact, it’s arguable if you ever really were.” 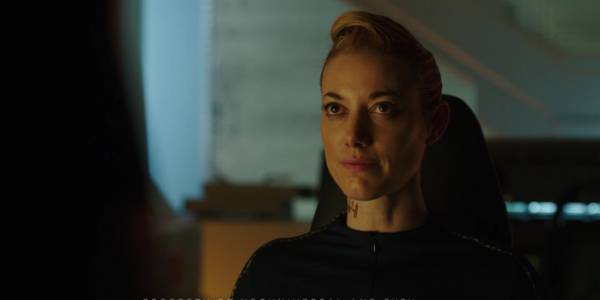 During Shadick’s incessant interrogation of the crew, she tells FOUR there’s an Ishida Cruiser in orbit.  She says they’re there to take him back for execution.  She thinks this is her leverage, but what she doesn’t know is she just gave our gang way off that prison rock!  The caper is in motion now.

Out of the blue, or the black, Commander Truffault (the always wonderful Torri Higginson) conveniently shows up and THREE finds himself in a room having a little chat with her.  She admits she was behind the immunity deal to get someone to talk.  THREE understands that if they talk it’ll take the blame off Mikkei and place it on Traugott.  He refuses to take the deal unless she offers it to all 3 of them together.  She says no, so THREE walks out.

That’s when Truffault stops him and tells him to look her in the eye.  When he meets her gaze, she pulls some kind of space stink-eye move on him.  Her eye flashes green symbols and THREE’s eye does the same in return.  It jolts him, then he looks a bit dazed.  What? 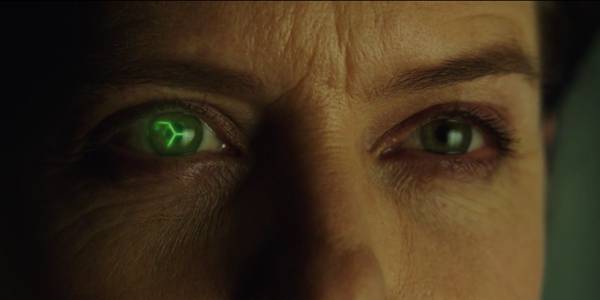 You’ve got something in your eye. (Image courtesy Syfy)

One thing that’s been consistent with Truffault, besides always looking fabulous, is that she sees the Raza crew as an asset.  She knows that having them on her side is advantageous, so helping them would further that cause.  The green flashing symbols in her eye?  That was some schmancy way of transmitting the layout of Hyperion-8 straight into THREE’s head.  I’m certain it’s purely for personal gain and as a CYA measure, but if it gets our crew out of prison I’m fine with that.

Back in his cell, THREE furiously draws the plans under the mattress of his bunk.  Now the gang have a guide for getting out of jail free.  Unfortunately, Arax wants in on the escape and offers assistance “on the outside”, but Nyx tells them the regular shuttle runs have been suspended.  That’s when FOUR tells them he has a way to get a ride off the rock.  He’s going to tell Shaddick he wants to be taken back by the Ishida guard, which will provide a handy-dandy shuttle they can steal.  These guys are the best at turning setbacks into opportunities.

Anders clues SIX in to the fact that the warden’s been paid off to kill the crew and that ONE/Moss has already been killed.  He says there’s nothing that can be done about it.  I think he’s just trying to do the right thing from a “good GA soldier” position and help his buddy come away unscathed.  I really believe he’s a decent guy who’s just caught up working for an evil police force.  It’s not that he wants the Raza crew dead, he just doesn’t see a way, or a reason, for SIX to save them without going down with them. 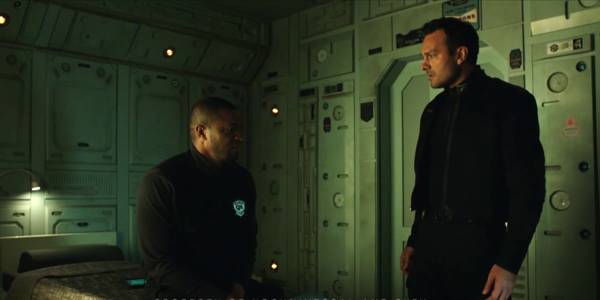 SIX isn’t letting his (former) crew go down.  This goes doubly so after FIVE asks him to help them escape as a big step toward redeeming himself.  He arranges to meet TWO in the sim yard.  She’s not at all happy to see him, but he convinces her that he’s trying to help them; that he thought he was doing the right thing before, but now realizes the GA are the real “bad guys”.  Once TWO is out of her meeting with SIX, the extended group consisting of our crew, Nyx, and Arax start a prison riot in genpop while SIX works to disable power to the room in which Android is being held.

Meanwhile, Shaddick is still trying to get Android’s data.  This time, she brings FIVE into the room.  The kid appears to cooperate at first.  She gets Android to confirm she’ll comply with whatever orders she’s given by herself.  When SIX completes his task and Android’s restraints lose power, FIVE gives one of those orders, and that order is to, “kill them all”.  Whoa, kid!  Now we know what FIVE is capable of when pushed too far.  Don’t mess with girlfriend’s friends.

The rioters, and everyone on Hyperion-8 besides the guards, are knocked out by the sonic blast.  Our gang was counting on TWO’s unique abilities to allow her to remain conscious, and it works.  She makes it to the security control room and turns the guards’ ear pieces against them, channeling the sonic blast through them.  When the prisoners wake up, they begin rioting again, because that’s what prisoners seem to enjoy.  This is great cover for an escape, just as planned.

Memories or not, the Raza crew are unbelievably effective as a cohesive team or as individuals.  Their reputations were most definitely earned. 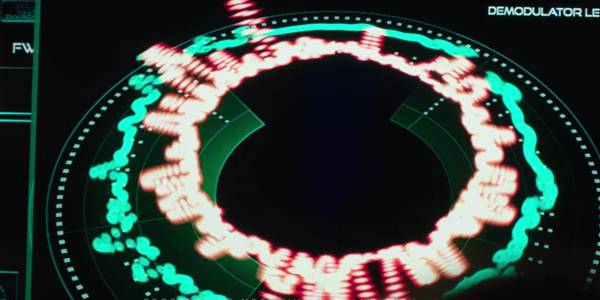 “Excuse me. Does this sonic device come in screwdriver form?” (Image courtesy Syfy)

As they make their way to the shuttle, Android and FIVE find Bubba.  The kid wastes no time taking down a couple of guards with it, like she’s a natural.  She’s turning out to be a real badass when she needs to be.  Naturally, Misaki Han, leader of the Imperial Guard and stooge who unwittingly brought our group’s getaway car, wakes up as FOUR and Devon are passing by.  Misaki and FOUR get into what seems to be a set up for an epic sword fight.  But like a little Indiana Jones, FIVE blasts the bejesus out of her and says, “Sorry. We’re kind of in a hurry.”

I think FIVE’s enjoying Bubba more than THREE ever did.  And boy, is she good with it, too!

The whole gang meet at the shuttle door, but Anders shows up to try and stop them.  SIX does his best to talk Anders down, but he’s a loyal soldier who still believes he’s doing the right thing by stopping the escape.  Sadly, it ends in an exchange of gunfire between the two GA men.  SIX is wounded, but it looks like Anders took several hits and won’t be walking it off.  Or walking at all.  Or breathing.  Although … we don’t actually see him like, completely dead and stuff and this is Dark Matter we’re watching, so maybe there’s still hope? 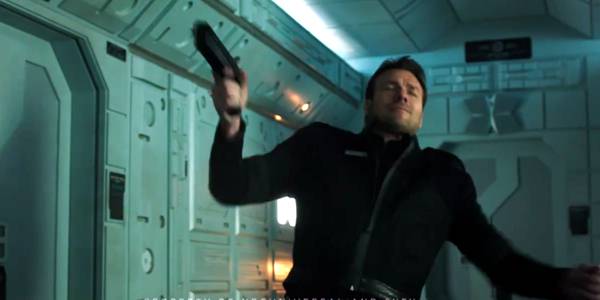 This sort of thing is getting to be a habit in season 2 of Dark Matter. (Image courtesy Syfy)

Poor Anders.  Jeff Teravainen’s portrayal of the character quickly became a fan favorite.  Even though he was only in a few scenes throughout the series, I really thought he’d eventually end up on the Raza.  Man, was I ever wrong.  Or was I?

Creating a literal blaze of glory, everyone blasts out of Hyperion-8 in the Ishida shuttle.  The poor warden, having given up at this point, simply drinks while he watches his prison empire burn.

The gang make it to the Raza, but for some reason Android can’t establish a neural link to the ship.  She has to manually fly them out.  I’m certain this little detail will be hugely important, but for now I have no idea in what way.  Waiting to find out is half the fun.

SIX is hurt too badly for Devon to help him, so they put him in a stasis pod until they can get the tools needed to save him.  As they’re fleeing, the crew watch a news report about the murder of ONE by Jace Corso.  But is ONE really dead or is this some elaborate ruse for reasons my pea brain cannot yet fathom? 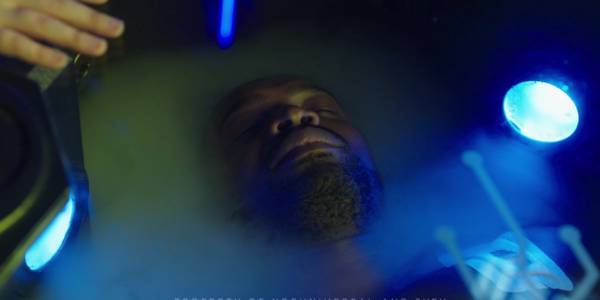 As the episode comes to a close, Alicia Reynaud, the creepy lady who has an obsession with FIVE, learns of the Raza’s escape.  She refers to the kid as “the asset” and affirms her intentions to “go get them”.  This ends the episode with another big question mark about who she is and why she wants FIVE.  Could it be she knows the kid stole the keycard that is part of a technology for opening portals to extra-dimensional space?

The pace of this episode was much more brisk than the season two opener.  Naturally, because of the required set-up for introducing a new setting and new characters, the premiere required a more measured stride.  Now that we’ve established the basics of the situation, episode 202 was free to run wild.  And it did.  And it was fun.

Of all the characters, FIVE got to shine in surprising ways this time around.  There is absolutely no doubt that “the kid” can hold her own in any situation and is a true member of the crew in everyone’s eyes.

And don’t ever call her Pumpkin.  You hear that, Reynaud?

Now that we’re all caught up with episode 202, check out some teases from episode 203 here: Dark Matter 203 “I’ve Seen the Other Side of You” – Promo & Sneak Peek