I love the title of episode 206, considering it’s Nyx who’s in the spotlight.  Dark Matter 206 “We Should Have Seen This Coming” syncs with the special ability Nyx has to literally see what’s coming.  It’ll be fun to see how it’s used in the episode’s dialogue.

A hard act to follow, episode 205 “We Voted Not to Space You” was a really fun one.  Like all Dark Matter episodes, it answered a lot of questions then ultimately raised even more.  But that and the great character building are what we love about the show.  Give us people we care about and we hunger to learn more about them.  That’s what Dark Matter does best, and it doesn’t make us wait very long for our dinner, either.

But enough babbling on my part.  The promo for upcoming episode 206 begins our journey into Nyx’s past.  There’s not enough here to know everything we’ll learn about her, but there are some interesting teases.

Strapped for cash, the crew of the Raza follow Nyx’s lead on an op, only to find out their target is a personal one.

Clocking in at a little over 2 1/2 minutes, this sneak peek offers an interesting exchange between Nyx and Four.  That conversation leads to an interesting flashback from Nyx’s life before Hyperion-8.  She appears drugged and is being carried by three men down the corridors of a ship.  One of the men mentions something about using the gift they’ve been given.  I wonder if this is the same “gift” that affords Nyx her precognitive abilities?

Speaking of precognition, we get to see what it’s like in Nyx’s head when her ability kicks in.  It’s like she consciously dreams the next few moments in her mind before they happen, giving her a unique advantage.  She sees herself fight – escaping the clutches of the men taking her away, then she acts on it.  As she’s about to take out the last man, he says, “… he’ll find you.”

Doesn’t that last bit sound a lot like the situation between Two and Alexander Rook?  I wonder if they’re connected?  Watch the sneak peek, let me know what you think in the comments, and then we’ll all find out who’s right next Friday!

Check out our review of last week’s episode here: Dark Matter 205: To Err Is Human 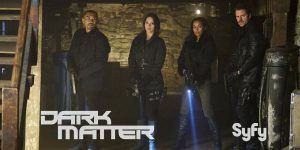