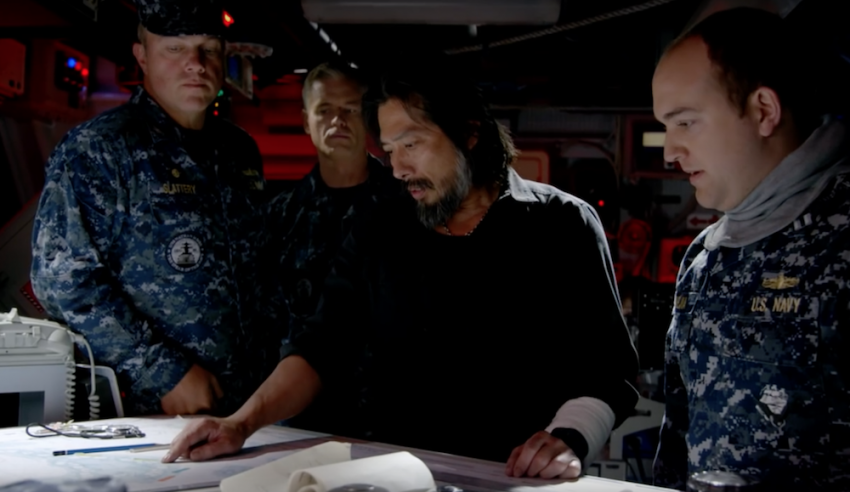 What TNT’s ‘The Last Ship’ can do in ten minutes of air time far exceeds anything else on television. The latest episode, “In the Dark,” takes viewers on an emotional rollercoaster of intense feels that will break your heart, make you cry, piss you off and give you chills – all before the first commercial break. The rest of the episode follows a similar path; it is rich in drama without the distraction of combat scenes or heart pounding explosions. I’m not saying those action packed moments aren’t welcome, just that this is a nice change of pace.

“In The Dark” is particularly special for fans because it is directed by show co-creator Steven Kane. This is his directorial debut for the series, and what Kane delivers is nothing short of impressive. From Green’s soliloquy to Sasha’s point of view, Kane succeeds in using his own distinctive style while keeping the feel and appearance of the show congruous with the other episodes. Outstanding directing combined with the brilliant writing of Katie Swain makes for a stunning hour of television.

I’ll admit, I struggled with this review because every minute is remarkable. Each character goes through a transformative process and each plot line makes enough u-turns that my head is still spinning. Unlike “Dog Day” where everything felt mechanical, this feels organic and lyrical. Tears are shed, anger is apparent and the struggle is real. “In The Dark” is like an intriguing piece of jazz music: complex in its arrangement and with the sweetest melody you’ve ever heard.

This episode brings the story back to its foundation. The reason Chandler was sent to Asia in the first place was to investigate a possible viral mutation. It’s the mystery that keeps on giving. Now that the crew is reunited, and Takehaya is onboard, the motivation behind the kidnapping slowly unfolds. Everyone in Japan received the cure but something is preventing it from working. How is it possible to have the cure and the virus cohabiting the same host? 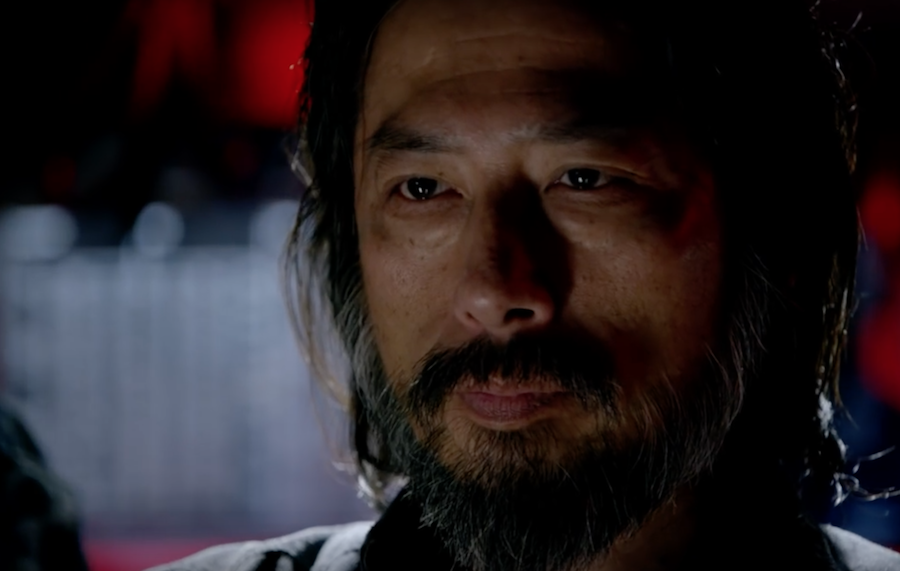 Takehaya’s personal metamorphosis is nothing short of magical. Actor Hiroyuki Sanada masterfully brings his character back from the brink of hopelessness. Each scene unfurls a new emotional state for our pirate captain, none more poignant than when he holds his firstborn son. Parents who watch this show, myself included, strongly identify with both the elation of that first cuddle, then the overwhelming need to protect and destroy anything that threatens their child. By the time Takehaya is steering the Nathan James through the minefield my opinion of this character did a 180 degree turn. I’m going to have a hard time letting him go when the writers decide to kill him off … or will they?

A softer side to Sasha comes out in this episode. Bridget Regan continues to surpass all my expectations in her portrayal of Sasha, from cool operator to badass sniper. The element we had not yet seen was her emotional connection with those around her. Kyoko gives her that opportunity and Sasha stays by her side throughout the emergency c-section. When the two women stumble upon a clue about the issue with the cure, neither understands the impact – yet. I can’t wait to see how this nugget of information plays into next week’s episode.

Jacob Barnes never quits. His interview with Curtis, Dr. Scott’s killer, reveals to the wider populace the truth behind Michener’s mindset prior to taking the oath of office. Travis Hammer, who plays Curtis, delivers a character that is the epitome of unstable nut job. Through their dialogue the audience is told that only eleven days passed between Michener’s attempted suicide and his inauguration as President.  I hate to admit it, but I agree with Jacob that Michener shouldn’t have taken the oath given his mental state.

As a nerdy constitutionalist, I had to look and see what might have happened if Michener hadn’t committed suicide.  The twenty-fifth amendment speaks to the process whereby the Vice President and Cabinet may oust a sitting President if they believe him incapable of performing his duties. While it may not have been Michener’s fault for the outbreak, he did break quarantine protocol. Worse, his guilt still eats at him. As the pressure of Barnes’ televised story mounts, Mark Moses masterfully demonstrates Michener’s struggle to maintain his sanity. 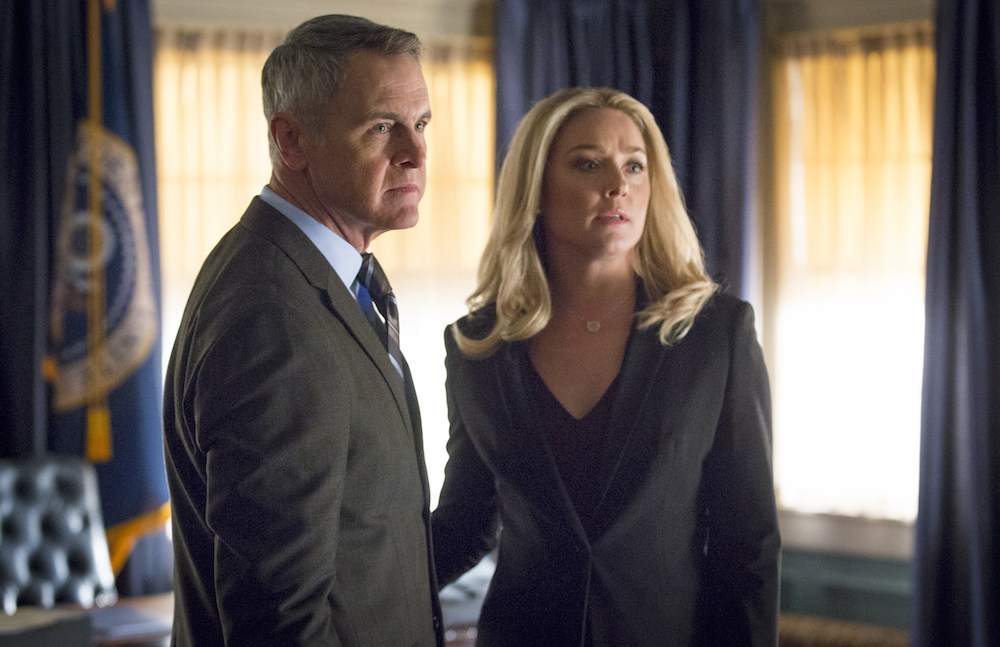 Congress has yet to be elected on the show, but Vice President Howard Oliver exists. We’ve not yet seen him; Michener said in the premiere that the VP was traveling in South America. My guess, judging by the shock and disappointment in the eyes of Alex and Allison, is that the Cabinet would find Michener unfit for office. We know the regional leaders waver in his support and I doubt they’re pleased now. The VP would likely have agreed and immediately been named ‘Acting President.’ Michener would still have been ‘President,’ just unable to use the powers of office.

Now that VP Howard becomes President Howard, who takes his spot? Again, it’s the same twenty-fifth amendment that describes the process. President Howard will nominate a person for the Vice President role, and Congress, once they’re elected, will have to agree to his nomination. Who will the writers pick for this job?

One of the season’s best ‘behind the scenes’ stories occurs in this episode. Remember when Sasha is listening to the Chinese vessels who each think the Nathan James is their compatriot? Bridget Regan and Steven Kane told a hilarious story at Wondercon earlier this year about what Sasha is really listening to. Apparently, the Chinese voices were added in during post-production. All Bridget heard was Kane’s voice saying, “Chinese, Chinese, Chinese! Listening . . . listening . . . it’s awkward . . . Chinese!” I’m not sure I’d have made it through that scene without laughing in every single take. Check out that interview here:

Peng has a reason for wanting Chandler and crew dead, but I can’t figure it out. The writers have made him a cagey character, leaving us to wonder what the real story is. When Vulture team forced Peng to allow the James to refuel, Peng refused to tell Chandler his motives for blowing up the plane. With the new clues about the ineffective cure, I have to wonder if his goal is simply world domination?

If that’s the case, his evil plans are well thought out. Even with Chandler alive, Peng distracted everyone with the kidnapping and sent the world into turmoil over the supposed viral mutation rumor. He has four, oops, three warships at his command, is using local war lords as pawns to do his bidding and apparently has a slew of small ships carrying secret cargo (aka the biological weapons). Someone back in the US must be feeding him information about the movements and personnel on the James, too. And the video feed interference that has again been given screen time? Is there a spy camera in the White House?

I’d be remiss if I didn’t point out the highlights of “In The Dark.” Every scene had something wonderful about it which makes my job seem insurmountable. I want to celebrate it all, but these were my favorite moments.

First time on a darkened ship? I thought you said she
was Navy, Tom? -Slattery
Naval intelligence doesn’t spend much time on small-boys. -Sasha

“Attention in the pilot house. This is Captain Chandler. Captain Slattery has the ship.”

“In The Dark” deserves a standing ovation. The story is compelling, the writing top notch, the directing seamless, and the acting incredible. This season needed an episode where the players were allowed to develop emotionally, without the distraction of big explosions and intense hand-to-hand combat scenes. Director Steven Kane and writer Katie Swain (seriously? Your initials are SK and KS? It’s a television match made in heaven!) dialed down the action without losing the intensity. You both brought your A-game and, as a fan, I thank you profusely. So if you hear the sound of clapping in the distance, don’t worry – that’s just me. You deserve more accolades but I have simply maxed out my vocabulary.