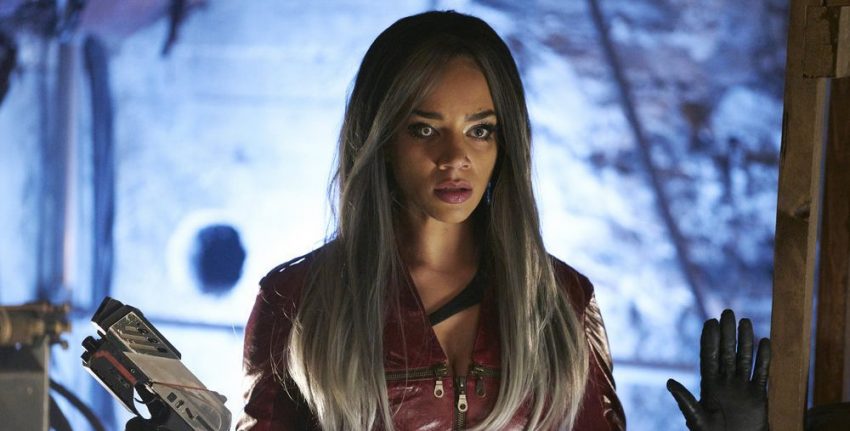 Praise the trees, Killjoys is back! Sass, action, spaceships, green s***, all of it! And better than ever. Craving one-liners? Full of ’em. Need shirtless D’Avin? OK, sure! Want Dutch’s wardrobe? I currently covet that red leather duster… (At the bottom of this post, you’ll find a chance to win a set of limited edition Syfy pins!)

Quick recap – Johnny and Dutch, partners, find Johnny’s rogue, brain-fried soldier brother D’Avin, he joins the team, has an ill-advised one-nighter with Dutch. Later, under the influence of his brain frying, he turns into a violent robot and tries to kill her. Dutch is the product of childhood assassin training by Khlyen, deceptively soft-spoken handsome mysterious baddie who calls her Yallah. She may or may not be a daughter of one of the Quad’s ruling families. The three of them work as interplanetary bounty hunters, called Killjoys, serving warrants on bad guys for the mysterious RAC. The Company, which is willing to do all kinds of horrible things to citizens, runs the Quad. Bellus is our KJ’s controller; Pree runs a bar called the Royal; Pawter definitely is a member of a the ruling families, but is now a disowned doctor. D’Avin has a ??-night stand with her too. Alvis is a leader of a religious group called the Scarbacks, self-administered flagellators. Khlyen kidnaps D’Avin, takes him somewhere called Red 17 to turn him into a mysterious Level 6 – Dutch is a level 5 Killjoy, but what’s a Level 6? The Company bombs Old Town, Dutch and Johnny and Pree escape. 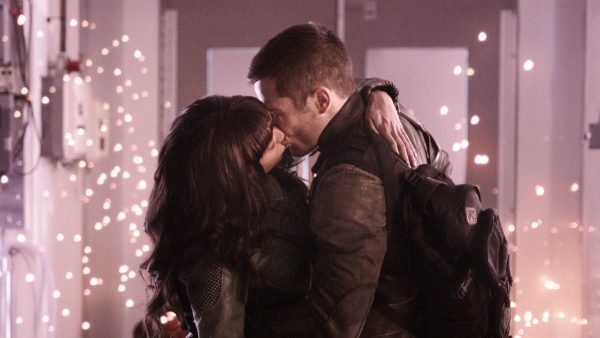 Phew! Now it’s five days later. I know it felt like 10 months, but time’s compressed in space. Johnny, Dutch and Pree are tracking D’Avin, and believe they’ve found him on Arkyn, a forbidding, forbidden Quad moon. There’s a scary looking facility built on it, and as they accidentally find out, it’s covered with an impenetrable defense layer that not even Lucy can break through. What’s going on down there? Apparently not mini-golf and s’mores – D’Avin’s having green-slime induced visions as he’s being turned into a mysterious Level 6.

In our chat with the Killjoys crew, which you can read here and here, Hannah John-Kamen said that anything and everything can be important, and can come back somehow – did you keep your eyes peeled for anything even potentially significant? D’Avin’s first “vision” was of being rescued by his crew (including the kiss, pictured above), with help from Fancy Lee, who we saw on the table next to him in last season’s finale. How can see “see” something that hasn’t actually happened? And later he “sees” a slaughter outside – one man on the ground, bleeding that green stuff, begs for death; Scarbacks carrying small trays of tiny trees are being hunted and killed. Where is this, why is D’Avin seeing it? Did it really happen at some point?

Remember that last season, something had happened to him – his brain had been tampered with, turning him into a killer, unaware of what he was doing. Did he participate in this slaughter without remembering? Was that all part of what’s happening to him now? A first step, maybe? Or could that be why his body has now rejected the Level 6 process? Why were the monks – who we already know aren’t peaceful, Dalai Lama type monks – being killed? I’m sure we’ll learn more about this throughout the season!

And there’s more to D’Avin’s visions – he sees Dutch in that killing field, slitting throats. When he tells her, she has no memory of it, and it could be dismissed as a hallucination, except for Khlyen saying that it wasn’t a dream, it was a “really old memory.” Has Dutch done things that have been wiped from her brain? Was it under Khlyen’s direction – or could this be something he is trying to protect her from?

To get through this defense shield on Arkyn, Bellus clues them into an illegal piece of tech being held by the Connaver gang – I bet they’ll show up later – but reveals that it’s in the criminal barter town of Eulogy. I love that name – how many have been read for the town’s losers? To get in, though, you have to have two qualifications – be a known criminal, and have something worthwhile to barter. And WHO KNEW???? Pree! You thought he was all flash – apparently there’s some deep dark sumthin sumthin there! Preema Des, alias Big Daddy Scrimshaw, alias Paris O’Malley… And doesn’t he look bigger and buffer than he did last season, all of a sudden! I think it’s knowing that he’s not just some flamboyant hock slinger… 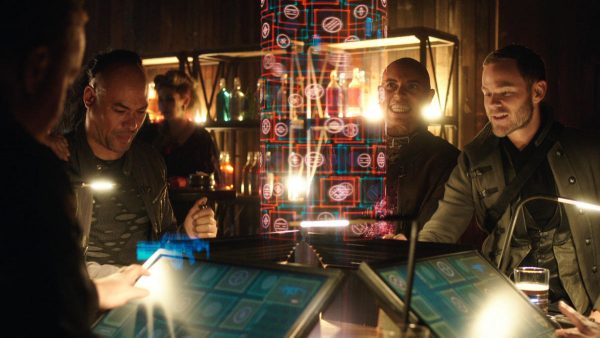 And they find the shield, but they also find – Clara. Not quite a person anymore, in the eyes of the company, as she’s 26% mods, thanks to that Connaver gang. How interesting is this! Carrying the shield within her, she agrees to get them onto Arkyn in return for freeing her from Eulogy. And Johnny’s natural decency makes him sympathetic to her situation, unwilling to put her through more pain, but she listens to Dutch’s story about Khlyen, and quickly understands that “Khlyen is your Connaver.” As badly as she was damaged, unwillingly, she’s willing to help those who helped her, and get some of her own back against the oppressors. I really liked this character (played by Stephanie Leonidas, from Defiance), and hope that she’ll be back again. 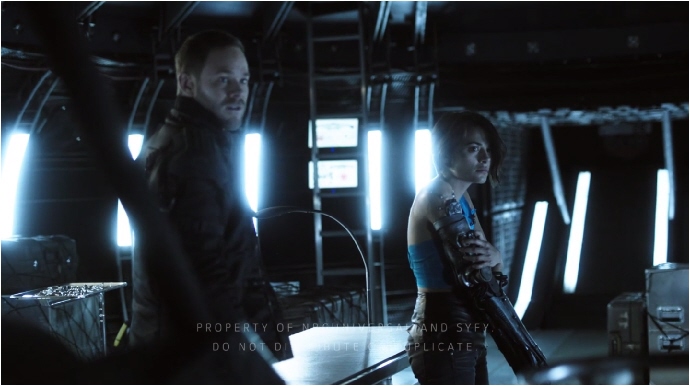 The most fascinating thing about tonight’s episode was Khlyen. When he realizes that D’Avin has actually rejected the Level 6 procedure, he pulls him out by killing the techs working on him, and leads him to one of those liquid computers. He tells D’Avin that he was being Sixed so that he can return to Dutch, loyal to Khlyen. “To kill her?” D’Avin asks. “To protect her. She listens to you. She doesn’t listen to me any more.” There’s something more – much more – going on here, a bigger conspiracy, a bigger plan involving Dutch than we have any clue about yet. What is the symbol D’Avin sees on the floor? We’ve seen that before – it’s obviously the Quad, but what does it mean? 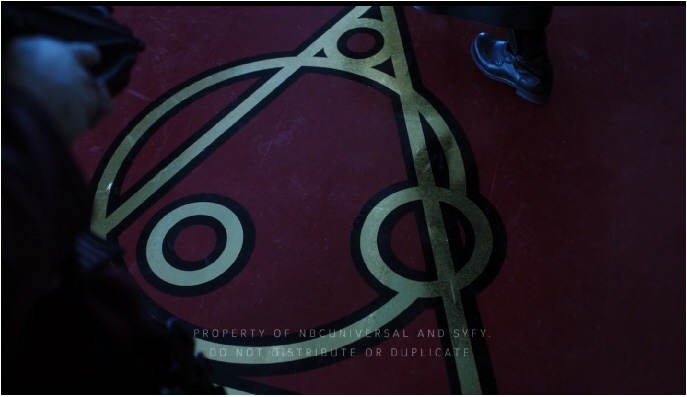 And another thing we have no idea about – what’s this Black Root that’s coming for Khlyen? They obviously have respect for him, but still stun him, drag him away, and put him in a stasis chamber to go to “The Lady.”  That is, until Fancy, after being unmasked as a Six, returns to Red 17, kills Khlyen’s guards, and does – what? – with Khlyen. 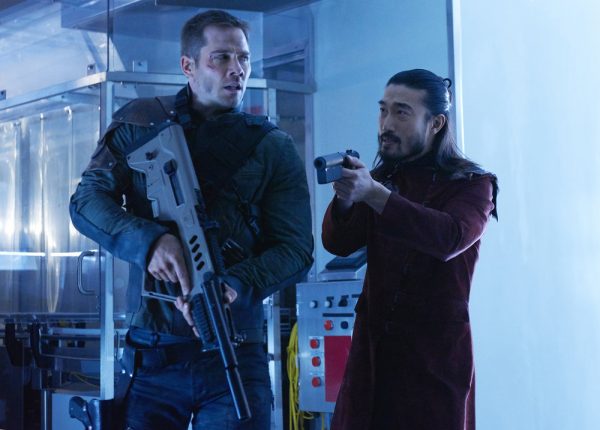 Even D’Avin begins to question Khlyen’s motives, and tells Dutch, “I don’t think Khlyen’s your enemy.” “I don’t think you get a say in this,” Dutch retorts. “He sacrificed himself, turned on his own people  to let you get away. What if Khlyen doesn’t run the RAC? And there’s a whole level above him? What if you’ve been wrong this whole time? What if Khlyen isn’t your real enemy and he’s been protecting you from who really is?” Dutch isn’t ready to believe any of this – but the idea is so intriguing. Could there be more, above Level 6? A wider, even scarier conspiracy, a plan for the Quad – and beyond? 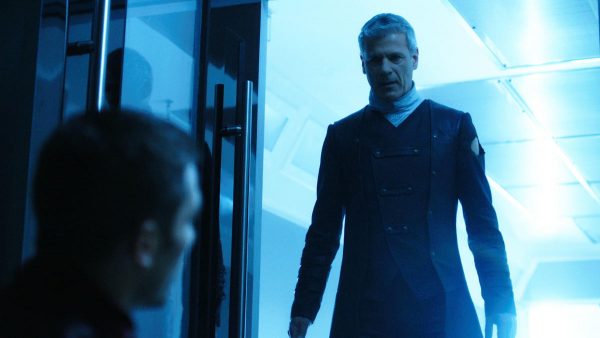 Next step for the Killjoys is to get to Old Town and see what’s still left, see if they can find Alvis and Pawter, see if anything of the Royal still stands. So many mysteries were brought up, just from this episode!

Take one more look at Clara and her mods, from Entertainment Weekly: 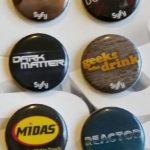